In the 15th edition of this series on Indian monuments by Sahapedia, we explore the unique complex of Maharaniyon ki Chhatriyan near Jaipur, which is dedicated solely to the queens of Rajasthan. The chhatris, especially the precinct in Gaitore, are well-known tourist attractions. But not many know that the origin of this integral Rajput tradition has Mughal influences The Rajput state of Rajasthan is peppered with hundreds of ornate chhatris that have often found their way to travel photos, coffee-table books and, quite ironically, as the sites for pre-wedding shoots, much to the probable chagrin of their custodians. The irony lies in the fact that these structures—which gained popularity across the arid landscape of Rajasthan around the fifteenth century—are cenotaphs. (But then, some might point out, Taj Mahal is a tomb. Touche!)

‘Chatris are an integral component of the visual vocabulary of north Indian Hindu kingship,’ writes Mellia Belli Bose in Royal Umbrellas of Stone. They are a prevalent feature in the dusty, arid tracts of land between the mushrooming metropolises… Each of the several hundred often monumental and lavishly carved and/or painted chatris found throughout the state marks a location where a Rajput king [or queen] or aristocrat was cremated, a portion of his ashes interred in the ground, and where he is subsequently memorialised and sometimes worshiped. Typically, chatris take the form of pillared and domed stoned pavilions, although… they may also be enclosed in forms that approximate temples,’ Bose explains. The origin of chhatris

Looking at the current Rajasthani landscape, these chhatris might seem like an ancient Rajput practice, but they were, however, adopted by the kings following the Indo-Islamic tradition of commemorating the dead with ‘permanent architectural monuments’, transforming the sign from tomb to chhatri. It appears that Rajputs only began constructing chhatris approximately two centuries after exposure to the Islamic practice of tomb-building, and by the sixteenth century, ‘all major Rajput courts were participating in chatri building.’

By the seventeenth century, commissioning a chhatri had become a seminal performance of Rajput kingship and legitimate political power, says Bose, potentially explaining why women’s chhatris did not gain as much importance. The Rajputs were so successful at establishing the chhatri as a metonym for land ownership and political sovereignty that in the eighteenth century new, self-appointed royal communities in north India, such as the Marathas and the Sikhs, also appropriated the chhatri to announce the validity of their rule, expounds Bose.

Over the centuries, the sites for these chhatris have become major tourist attractions, be it in Jaipur or Jaisalmer. One of the most popular sites with a huge collection of royal chhatris is in the foothills of Nahargarh, at Gaitore. While these chhatris and those in other parts of the state are well-known and often visited, there is one other place on the outskirts of the state capital that awaits its spot in the cultural spotlight—a recognition much deserved for its uniqueness. 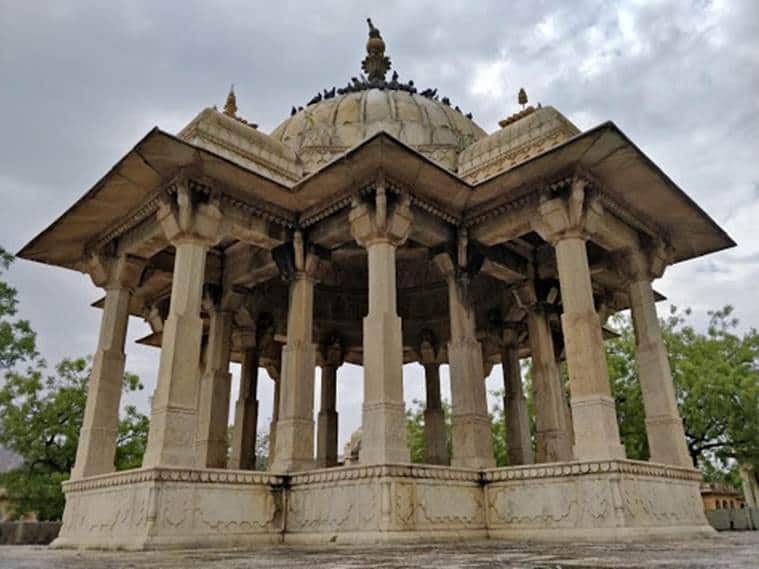 Twice the size of the Gaitore precinct, the Maharaniyon ki Chhatriyan complex is the only one of its kind—wherein monuments dedicated only to the women of the royal household of the Kachwaha dynasty stand tall. This is in contrast with the other chhatri precincts which are either dedicated only to the men of the royal household or members of both genders. The state-protected site is a marvellous example of funerary monuments, spread over a 4.5-acre campus, on the Amber Road from Jaipur, just a few metres short of the Ramgarh crossing. The custodianship rests with the Maharaja Sawai Man Singh II Museum Trust managed by the erstwhile royal family.

Over nearly 280 years, 11 beautiful memorials have been erected at the site—dedicated to the spouses of various kings who have ruled over the city. The first chhatri to be built here was in the early 1740s, for one of the three queens of Maharaja Sawai Jai Singh II (1688–1743), whose own chhatri is in Gaitore. The main canopy stands atop a high plinth, unlike any other pavilion in the compound. On the four corners of the plinth are smaller chhatris, wrought out of a more commonplace greenish-grey shisht stone (quarried from the neighbouring Aravalli foothills). The workmanship is austere yet precise. The structure, though imposing, exudes sublime elegance and marks a significant presence, much like a stern matriarch overlooking her younger charges.

Another monument of note is the beautiful, dainty and well-proportioned chhatri commissioned by Maharaja Sawai Madho Singh II (1862–1922) for his Jadaun Maharani. The layout is similar to that of the cenotaph of the maharaja at Gaitore, with small pavilions to mark the corners of the plinth. These pavilions are purely decorative, a classic folly—displaying the status of the primary queen of whom he was immensely fond. The bespoke workmanship is of a similar vocabulary later seen in the monumental canopy of Sawai Jai Singh Circle in the heart of Jaipur, more popularly known as the Statue Circle. Behind this chhatri is an arcade, with jaalis and steps that lead to a sunken courtyard. Standing in that court, you see two gateways—one to the South and another to the East. On high plinths, these gateways are a subtle device to exalt the status of the woman in whose memory the cenotaphs are built. Several elements of the complex, such as these gateways, were added by subsequent rulers. Their distinct architectural vocabulary of Indo-Saracenic architecture (a blend of Rajput, Mughal and European designs), using dressed buff sandstone and tastefully carved white marble, suggest their construction in the first decade of the twentieth century.

Interestingly, not all the inscriptions on these cenotaphs—unlike those of the kings—mention in whose memory they were commissioned, choosing instead to detail the amount spent on the construction. This latter information was particularly important as the court took care not to offend royal family members. In some cases, of course, dedication inscriptions could have faded or have been vandalised over time. All the other chhatris in the precinct have their domes crowned by finials. Their ceilings are very interesting—concentric rings of overlapping stones, with beautiful pendants hanging from the centres. Two cenotaphs in the complex, both without inscriptions, however, are left unfinished and without a dome—symbolic of the queen having died a widow. Surprisingly though, the cenotaph of the very religious Maharani Chadrawat ji (Sawai Ram Singh II’s mother and the widow of Sawai Jai Singh III) breaks from this tradition—the reason is not yet known.

The latest addition to this precinct was in 2009, after the passing away of Rajmata Gayatri Devi, the third consort of Maharaja Sawai Man Singh II. The siting of her cenotaph alongside those of the first and second wives of the king, speak volumes of their camaraderie in life too. The last ruling queen was the most recognised face from the royal family.

(This article is part of Saha Sutra on www.sahapedia.org, an open online resource for the Indian arts, culture and heritage.)

(The author is a conservation and heritage consultant, Heritage Cell, Jaipur Municipal Corporation.)