This story is a part of Show Your Teeth, a package in which Allure examines dental care (or lack thereof) in the U.S. and what we can do at home to better care for our teeth.

I was a sad kid with a sad smile. When I was growing up, I rarely broke into a grin or erupted into a giggle. I did have things to laugh about, but I was laser-focused on hiding what was inside my mouth. Uninhibited displays of joy took a back seat because my teeth were so crowded that by the time I was in fifth grade they had begun growing on top of one another, in every which way. Lateral incisors were hidden underneath fast-moving canines, which were simultaneously being pushed out due to emerging wisdom teeth. And that was just the top row. I was also dealing with teeth that grew in sideways, slanting so far to the right that they were crushing back into my gums.

In a nutshell: My teeth were crooked, with cavities riddled in between. But I was a child living in a single-parent household of five that relied on welfare and numerous government programs to keep the lights on and food on the table. Orthodontics, let alone basic dental care, was not a priority — or a possibility. We qualified for Medicaid — a health-care program that, along with the Children's Health Insurance Program, had enrolled more than 37 million children by the end of 2020 — but coverage was inconsistent. And it wasn't until 2016, long after I was living on my own in New York City, that my home state of Florida passed legislation to allow most Medicaid recipients to enroll in dental plans. Without a way to fund a new smile, I spent a lot of time and so much emotional energy covering up the one I had.

"I yearned for the shiny metal rows of braces my classmates wore."

Looking back at my tight-lipped school pictures or snapshots of me as a teenager with my hand hovering over my mouth, it's clear that I was embarrassed by my smile. I was ashamed of those chaotic teeth that betrayed my lower-class status as soon as I parted my lips. I yearned for the shiny metal rows of braces my classmates wore. Social interactions found me crippled with anxiety, afraid to open my mouth for fear of judgment of my lack of dental care. That fear followed me wherever I went and I played the shy card in school, up until I landed my first real job.

When I was 23, thanks to a full-time position with dental benefits, I was able to begin the process of getting the straight teeth I'd been made to believe were required to be considered beautiful and sophisticated. But my entry-level, $35,000-a-year job as an editorial assistant didn't cover most of the $6,000-plus Invisalign expenses. (In the U.S., the average cost of straightening treatments for adults can range from $5,200 to $7,500, according to the American Dental Association.) Even with dental insurance, I still couldn't really afford to buy the straight, white smile I was being sold in magazines and on TV — but I took on credit card debt to do it.

"Having a 'nice smile' is often unattainable unless you have money."

Correcting my crowding felt like the only choice I had in order to move up in the world, particularly in the beauty industry where I was working. In my mind, straightening my teeth meant that I'd finally have a smile that wouldn't make colleagues question how I landed a job in a field built on aesthetics. I went through three and a half years of orthodontist appointments, more than 40 sets of plastic retainers (switched out every two weeks), and at least 50 tubes of travel-size toothpaste for on-the-go cleanings between meals — all in an effort to feel accepted. Whether that acceptance came from myself or my peers is still up for debate.

What's not, though, is how I feel about myself — and my smile — now. My Instagram archives are a photographic timeline of my confidence growth: As my thumb flicks down, close-mouthed grins gradually turn into boisterous, wide smiles. And while I'm happy with my teeth now, I wish I could have been happy with the teeth I had. It just didn't feel like an option.

In the same way we talk about someone having what society has deemed "great skin" or "good hair," having a "nice smile" is often unattainable unless you have money. Gleamingly perfect, straight, white teeth are a sign of luxury and status (just ask any celebrity after their first "big break"), leaving those without them to feel less than.

But that status-symbol standard isn't necessarily connected to healthy teeth, teeth that prevent gum problems, cavities, and even heart disease. "Healthy teeth far outweigh the benefit of beautiful teeth. Always," says Marc Lowenberg, a New York City-based cosmetic dentist. And a smile's health cannot generally be measured by its whiteness and straightness. So at the same time that we question the pearly white veneer of "perfect teeth," we need to fight for the basic right of affordable health care and dental coverage. The average American might not be able to afford cosmetic dentistry or orthodontia, but no one should be denied the care necessary to have a healthy smile, whether it's gap-toothed, overcrowded, or has an underbite.

We have moved away from so many constricting, alienating beauty standards in recent years, slowly but surely shifting the definitions of what a "good" body or hair texture or skin tone looks like. Now let's say goodbye to "good teeth" and pave the way for healthy smiles of all kinds to shine — starting with the two glorious grins you see below. 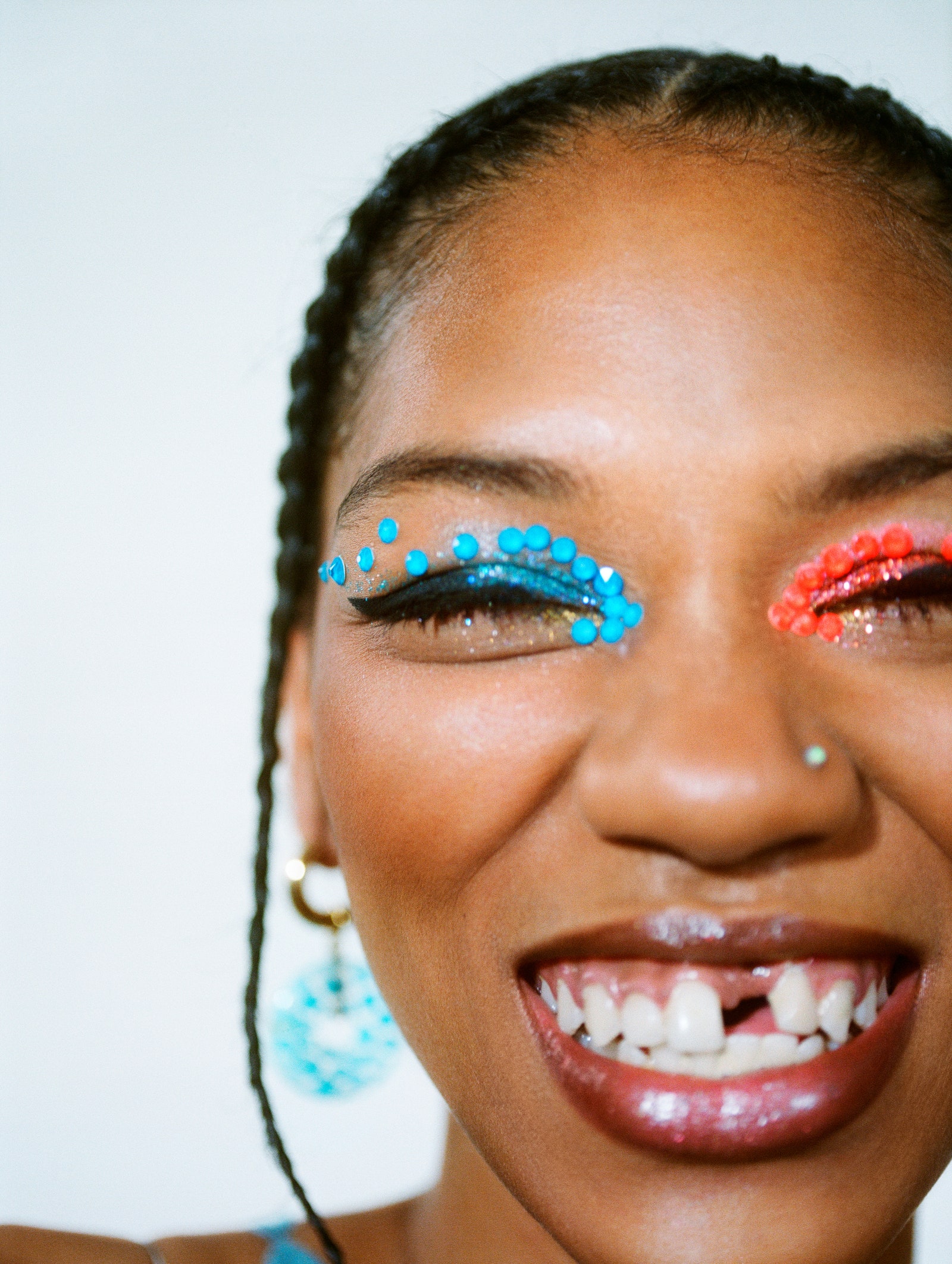 A few years ago, Symone Lu lost her left front tooth in an accident. It was then that her dentist discovered a hairline fracture in her jaw. In order to let the bone fully heal, surgery (and a replacement tooth) were put on pause.

"I remember being extremely insecure," she says. "I didn't smile for a couple [of] years. I was so upset." But then, after moving to New York City for college, something shifted. "I found people that understood where I was coming from and I started smiling all the time," says Lu, now 22. "I decided to say, screw what everybody else thinks." 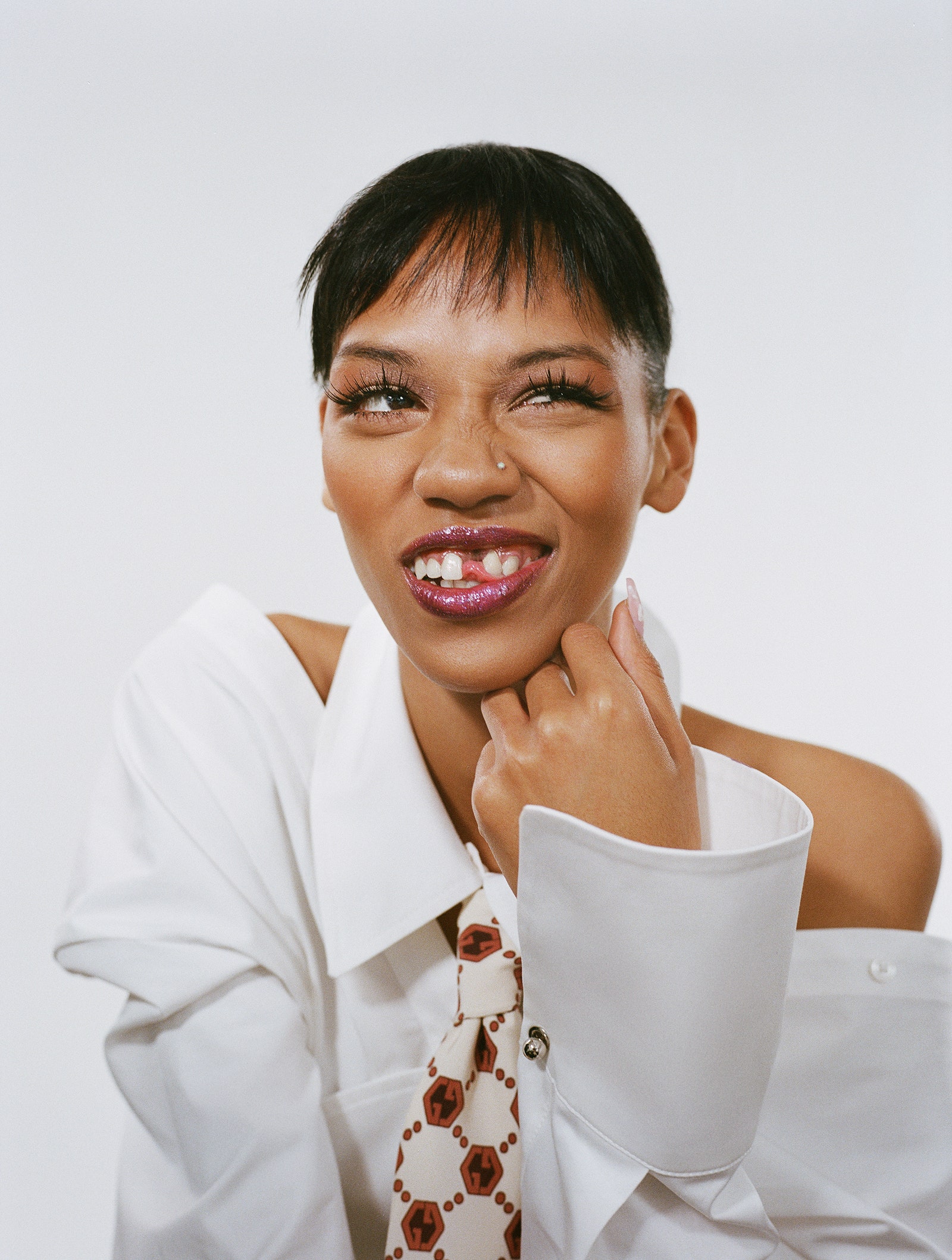 Since then, Lu has been booked in shows in New York and London Fashion Weeks and appeared in ad campaigns for MAC and Urban Decay. But her work is just getting started: "My image resonates with a lot of people, and I'm thankful I've inspired others to truly be happy [with themselves] no matter what they've gone through or are going through," she says. "The whole point of me doing what I'm doing is to remind people that we are all one and the same." 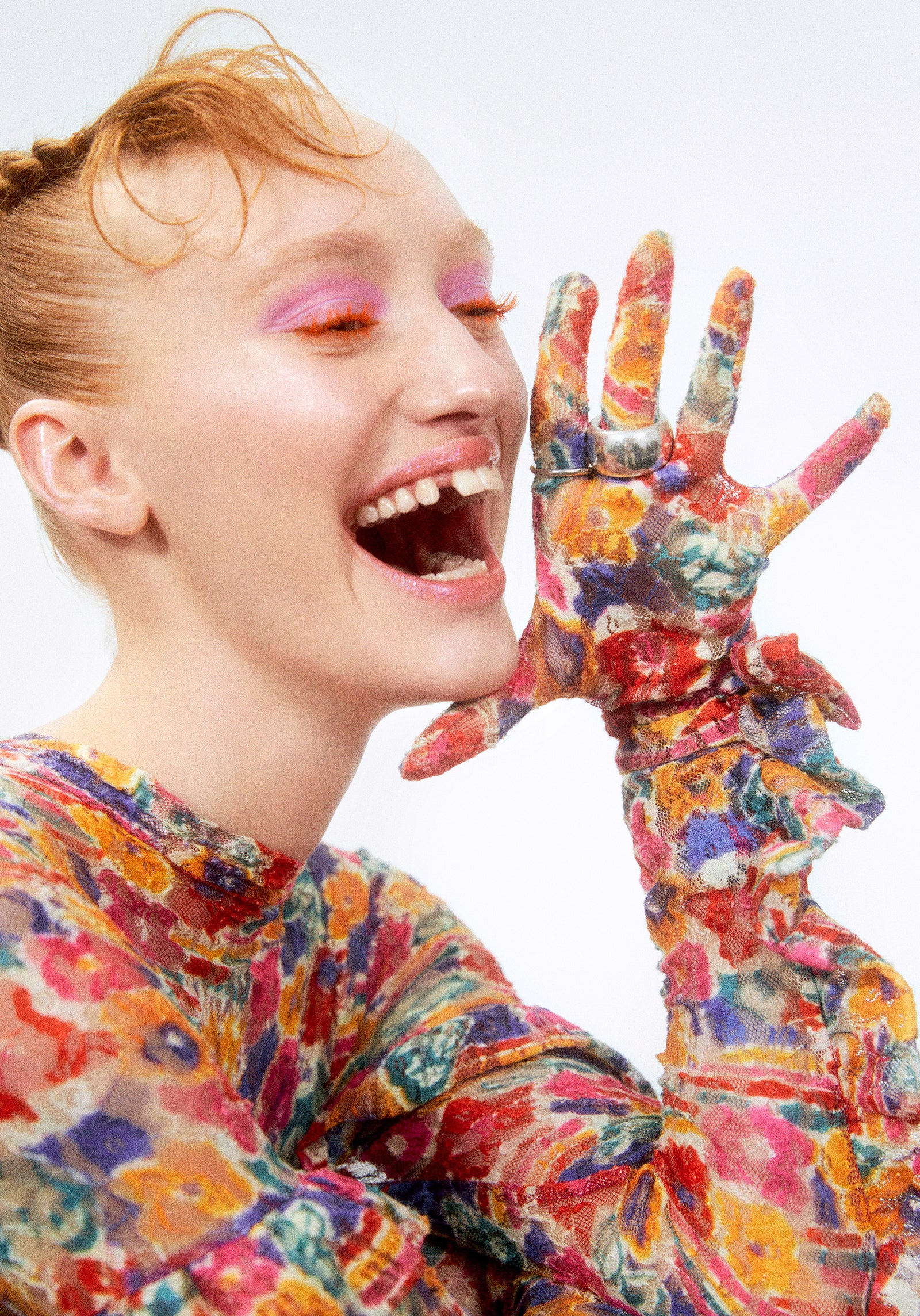 Faith Vaughn was 11 when she was diagnosed with hypodontia, a term used to describe a case in which some permanent teeth never grow in. For Faith, it was her two permanent canine teeth. Determined not to let middle school bullying get the best of her, after a long stint with braces she had a retainer made with the teeth she didn't have. But that wasn't her.

"I don't feel like myself when I have those two fake teeth in my mouth," says the now-19-year-old model. "When I don't wear [my retainer], I'm more outgoing. I'm more confident in myself." 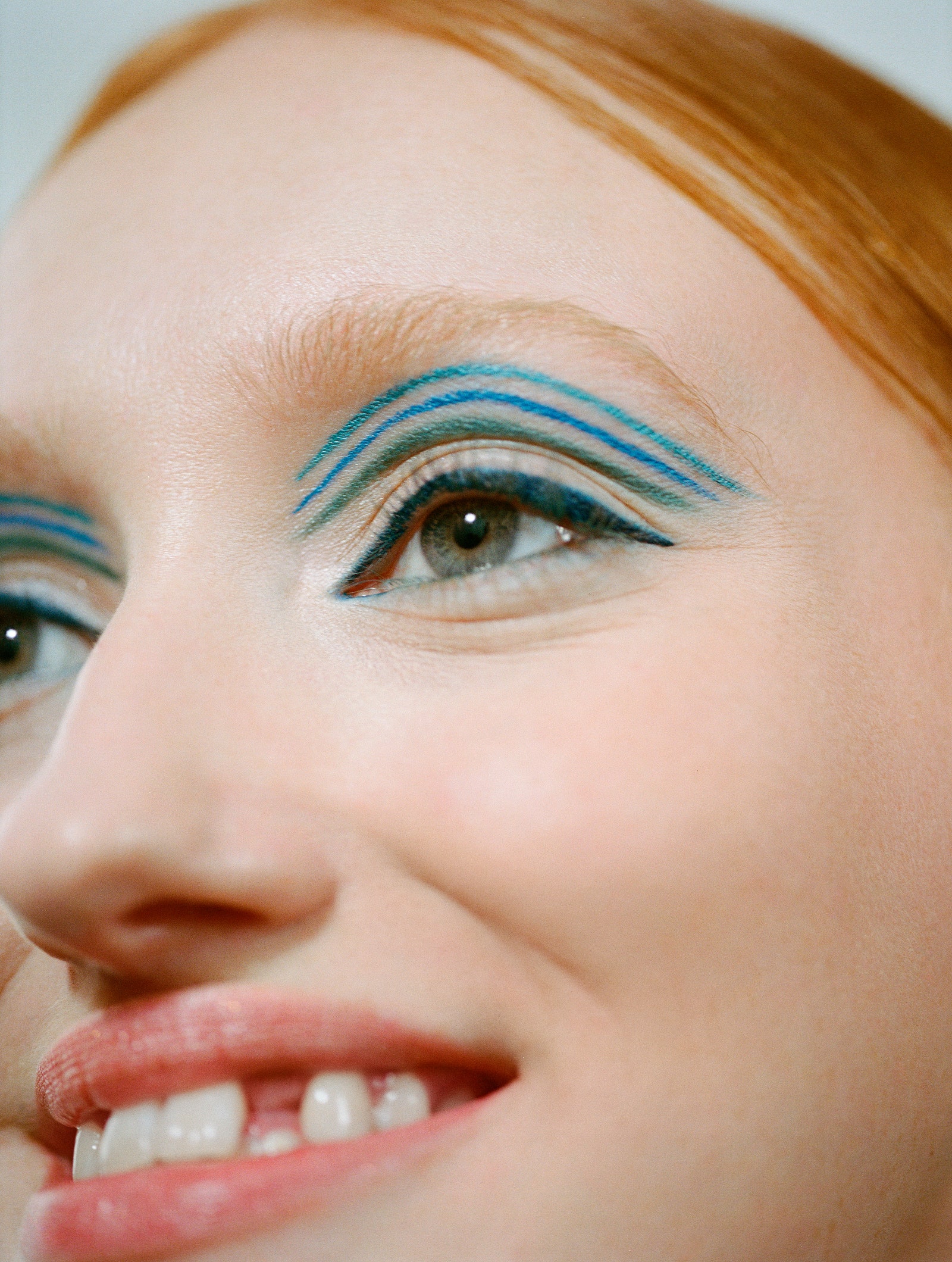 This is why, 99 percent of the time, you'll see Vaughn smiling big and bold, gaps on display, and encouraging others to do the same. "I just like to smile really big and make sure people see my teeth," she says. "This is unique. And I can help people feel inspired and confident in themselves."