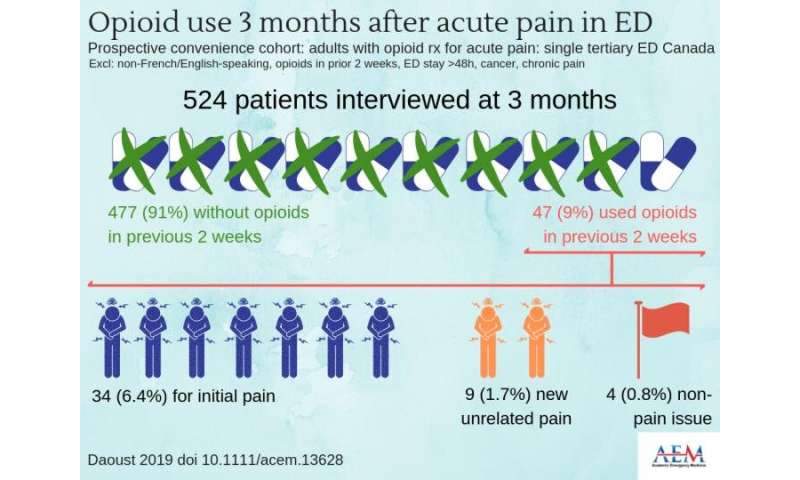 Opioid use at the three-month follow-up in emergency department patients discharged with an opioid prescription for acute pain is relatively low and not necessarily synonymous with opioid misuse. That is the conclusion of a study to be published in the August 2019 issue of Academic Emergency Medicine (AEM), a journal of the Society for Academic Emergency Medicine (SAEM).

The lead author of the study is Raoul Daoust MD, MSc, a clinical professor and researcher in the Department of Family Medicine and Emergency Medicine at the University of Montreal.

Daoust, et al., found that “…9% of patients discharged from the ED with an acute pain condition still consumed opioids 3 months later and 91% of them did so to manage pain (72% initial pain, 19% new pain). Furthermore, of the whole cohort, less than 1% consumed opioids for other reasons than pain, suggesting misuse.”

“The clear and present applied implication for research from Daoust et al is the need to test non-narcotic methods to treat acute pain. The more theoretical research implication is the need to better understand the neurobiology that drives the conversion of acute to chronic pain,” commented Jeffrey A. Kline, AEM Editor-in-Chief, in a summary about the paper sent to SAEM members.

“Emergency physicians should not be reassured by the authors’ findings. The lack of a denominator, poor response rate (56%), and applied definition of misuse are significant limitations. Shah et al (MMWR 2017) demonstrated the escalating probability of continued opioid use among opioid-naïve patients at one and three year if greater than three days were prescribed.”