Desperation led José Luis Hernández to ride atop a speeding train through northern Mexico with hopes of reaching the United States 13 years ago. But he didn’t make it. Slipping off a step above a train coupling, he slid under the steel wheels. In the aftermath, he lost his right arm and leg, and all but one finger on his left hand.

He had left his home village in Honduras for the U.S. “to help my family, because there were no jobs, no opportunities,” he said. Instead, he ended up undergoing a series of surgeries in Mexico before heading home “to the same miserable conditions in my country, but worse off.”

It would be years before he finally made it to the United States. Now, as a 35-year-old living in Los Angeles, Hernández has begun organizing fellow disabled immigrants to fight for the right to health care and other services.

No statistics are available on the number of undocumented disabled immigrants in the United States. But whether in detention, working without papers in the U.S. or awaiting asylum hearings on the Mexican side of the border, undocumented immigrants with disabling conditions are “left without any right to services,” said Monica Espinoza, the coordinator of Hernández’s group, Immigrants With Disabilities. 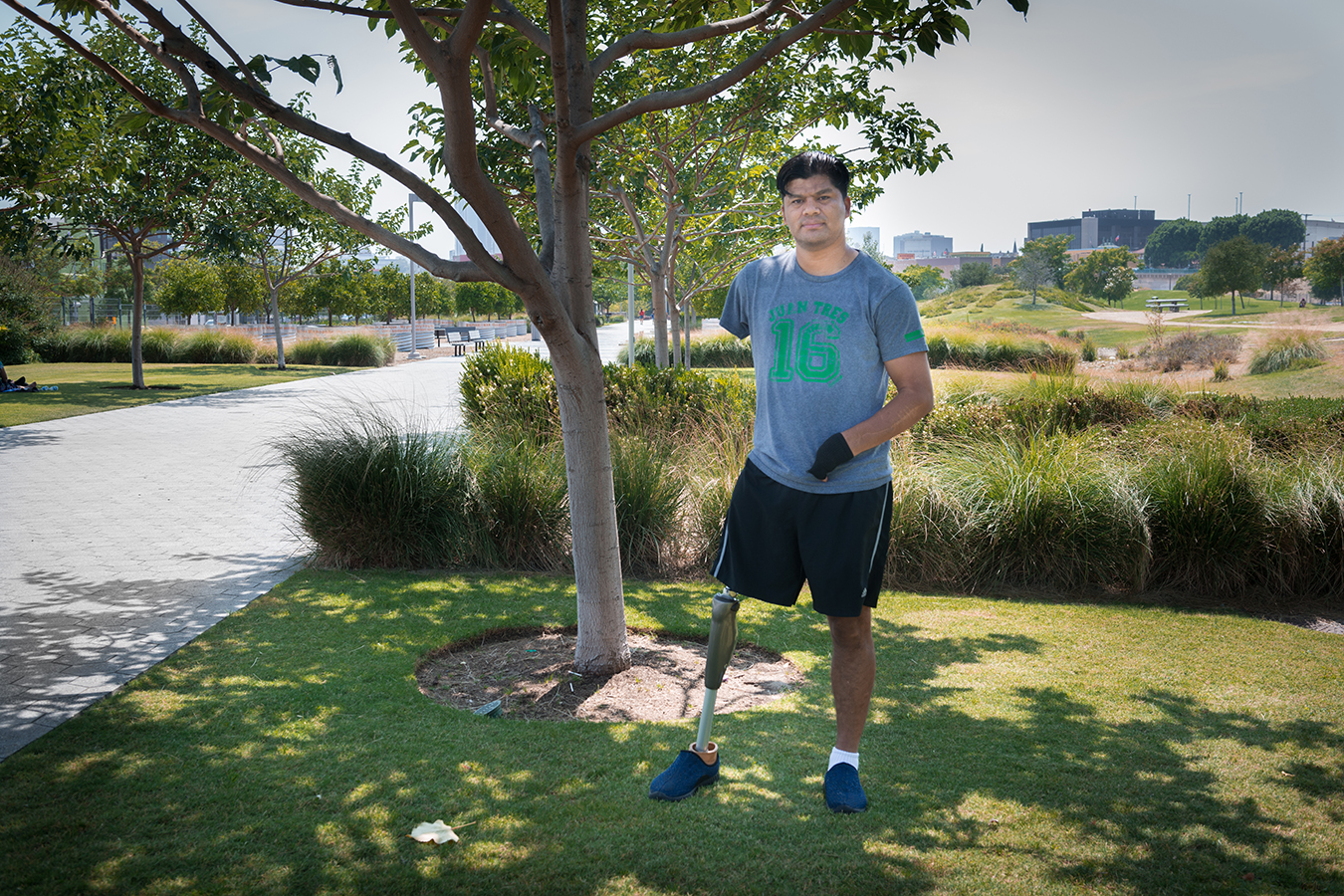 People granted political or other types of asylum can buy private health insurance through the Affordable Care Act or get public assistance if they qualify. In addition, Medi-Cal, California’s Medicaid program, provides services to people under 26, regardless of immigration status. Those benefits will expand next spring to include income-eligible undocumented people age 50 and up.

“That’s a small victory for us,” said Blanca Angulo, a 60-year-old undocumented immigrant from Mexico now living in Riverside, California. She was a professional dancer and sketch comedian in Mexico City before emigrating to the United States in 1993. At age 46, Angulo was diagnosed with retinitis pigmentosa, a rare genetic disorder that gradually left her blind.

“I was depressed for two years after my diagnosis,” she said — nearly sightless and unemployed, without documents, and struggling to pay for medical visits and expensive eye medication. 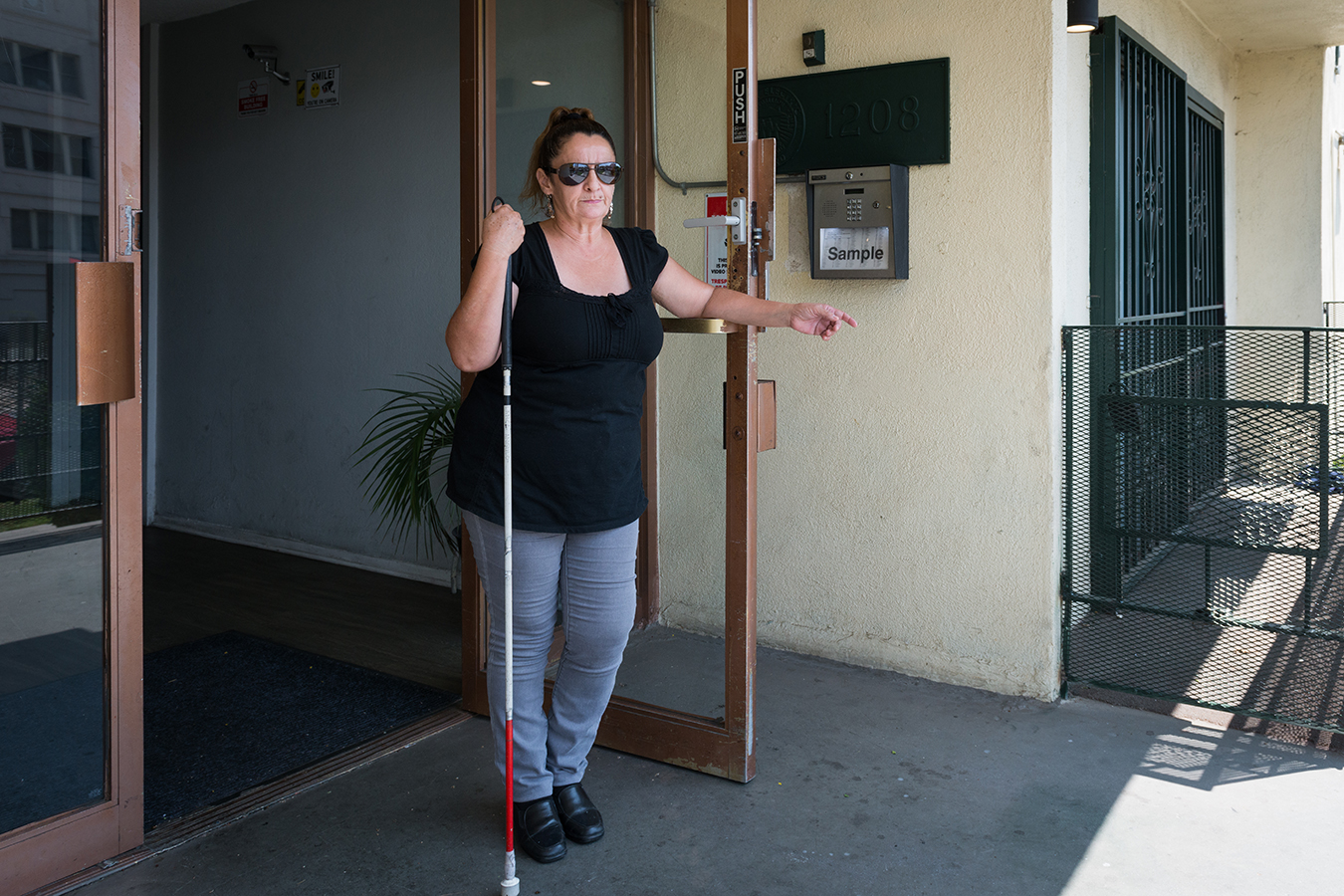 The situation is particularly grim for undocumented immigrants with disabilities held in detention centers, said Pilar Gonzalez Morales, a lawyer for the Civil Rights Education and Enforcement Center in Los Angeles.

“They always suffer more because of the lack of care and the lack of accommodations,” she said. Furthermore, “covid has made it harder to get the medical attention that they need.”

Gonzalez Morales is one of the attorneys working on a nationwide class action lawsuit filed by people with disabilities who have been held in U.S. immigration detention facilities. The complaint accuses U.S. Immigration and Customs Enforcement and the Department of Homeland Security of discriminating against the detainees by failing to provide them with adequate mental and physical health care. The 15 plaintiffs named in the lawsuit, which is set for trial in April, have conditions ranging from bipolar disorder to paralysis, as well as deafness or blindness. They are not seeking monetary damages but demand the U.S. government improve care for those in its custody, such as by providing wheelchairs or American Sign Language interpreters, and refraining from prolonged segregation of people with disabilities.

Most of the plaintiffs have been released or deported. José Baca Hernández, now living in Santa Ana, California, is one of them.

Brought to Orange County as a toddler, Baca has no memory of Cuernavaca, the Mexican city where he was born. But his lack of legal status in the U.S. has overshadowed his efforts to get the care he needs since being blinded by a gunshot six years ago. Baca declined to describe the circumstances of his injury but has filed for a special visa provided to crime victims.

ICE detained Baca shortly after his injury, and he spent five years in detention. An eye doctor saw Baca once during that time, he says; he relied on other detainees to read him information on his medical care and immigration case. Mostly, he was alone in a cell with little to do. 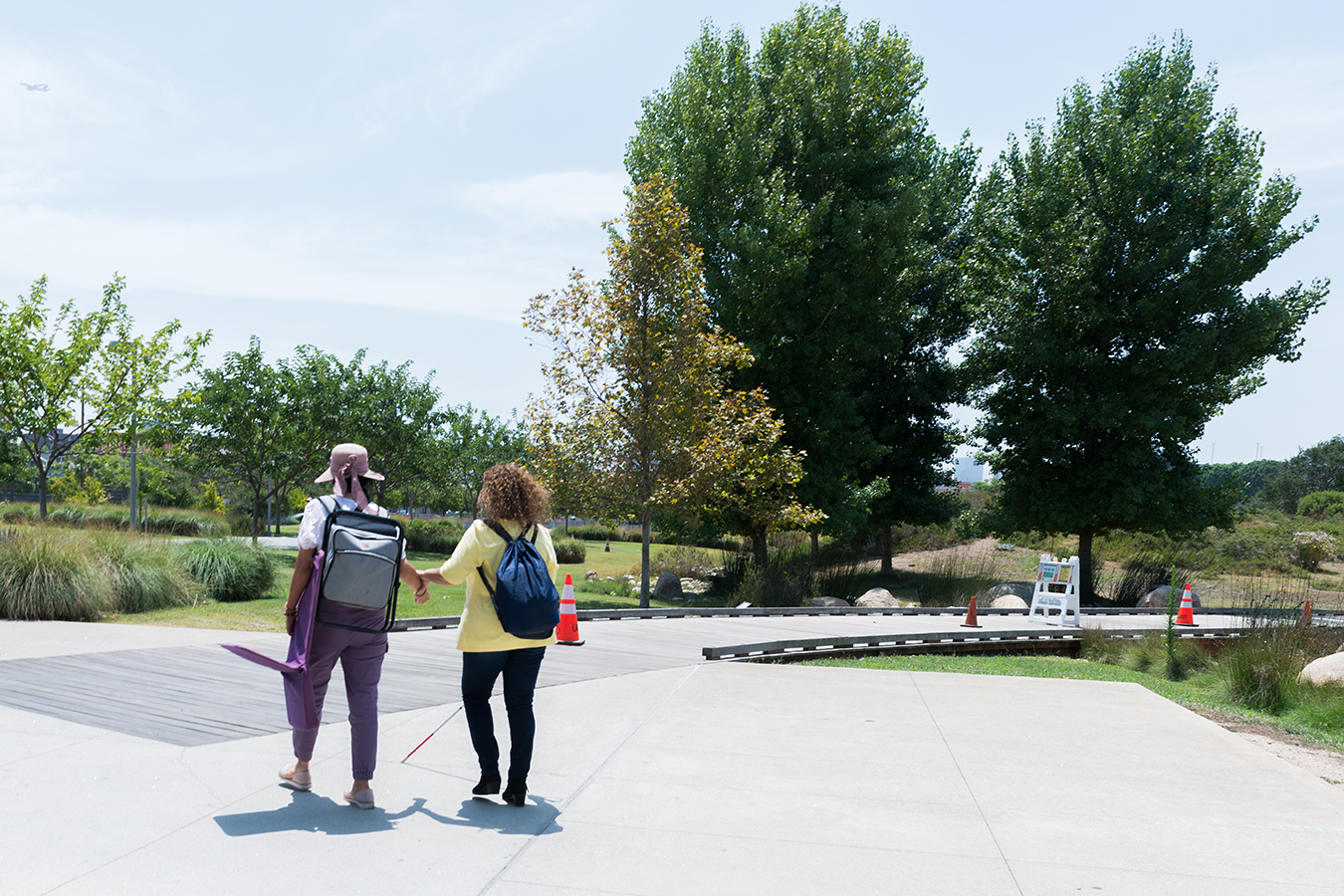 According to the lawsuit, treatment and care for disabilities are practically nil in government detention centers, said Rosa Lee Bichell, a fellow with Disability Rights Advocates, one of the groups that filed the case.

Her clients say that “unless you are writhing or fainted on the floor, it’s nearly impossible to get any kind of medical care related to disabilities,” she said.

“There is kind of a void in the immigration advocacy landscape that doesn’t directly focus on addressing the needs of people with disabilities,” said Munmeeth Soni, litigation and advocacy director at the Immigrant Defenders Law Center in Los Angeles. “It’s a population that I think has really gone overlooked.”

ICE and Homeland Security did not respond to requests for comment on the lawsuit.

Covid-19 poses a particular threat to people with disabilities who are detained by ICE. On Aug. 25, for example, 1,089 of the 25,000-plus people in ICE facilities were under isolation or observation for the virus.

In an interim ruling, the federal judge hearing Baca’s class action lawsuit this summer ordered ICE to offer vaccination to all detained immigrants who have chronic medical conditions or disabilities or are 55 or older. The Biden administration appealed the order on Aug. 23.

Hernández, who lost his limbs in the train accident, was among the hundreds of thousands of Central American immigrants who annually ride north through Mexico atop the trains, known collectively as “La Bestia,” or “the Beast,” according to the Migration Policy Institute. Injuries are common on La Bestia. And more than 500 deaths have been reported in Mexico since 2014 among people seeking to enter the U.S.

Hernández, who finally made it to the U.S. in 2015, was granted humanitarian asylum after spending two months in a detention center in Texas but quickly realized there was little support for people with his disadvantages.

In 2019, with the help of a local church, he formed the Immigrants With Disabilities group, which tries to hold regular gatherings for its 40-plus members, though the pandemic has made meetups difficult. Hernández is the only person in the group with legal papers and health benefits, he said.

Angulo has found solace in connecting with others in the group. “We encourage each other,” she said. “We feel less alone.” 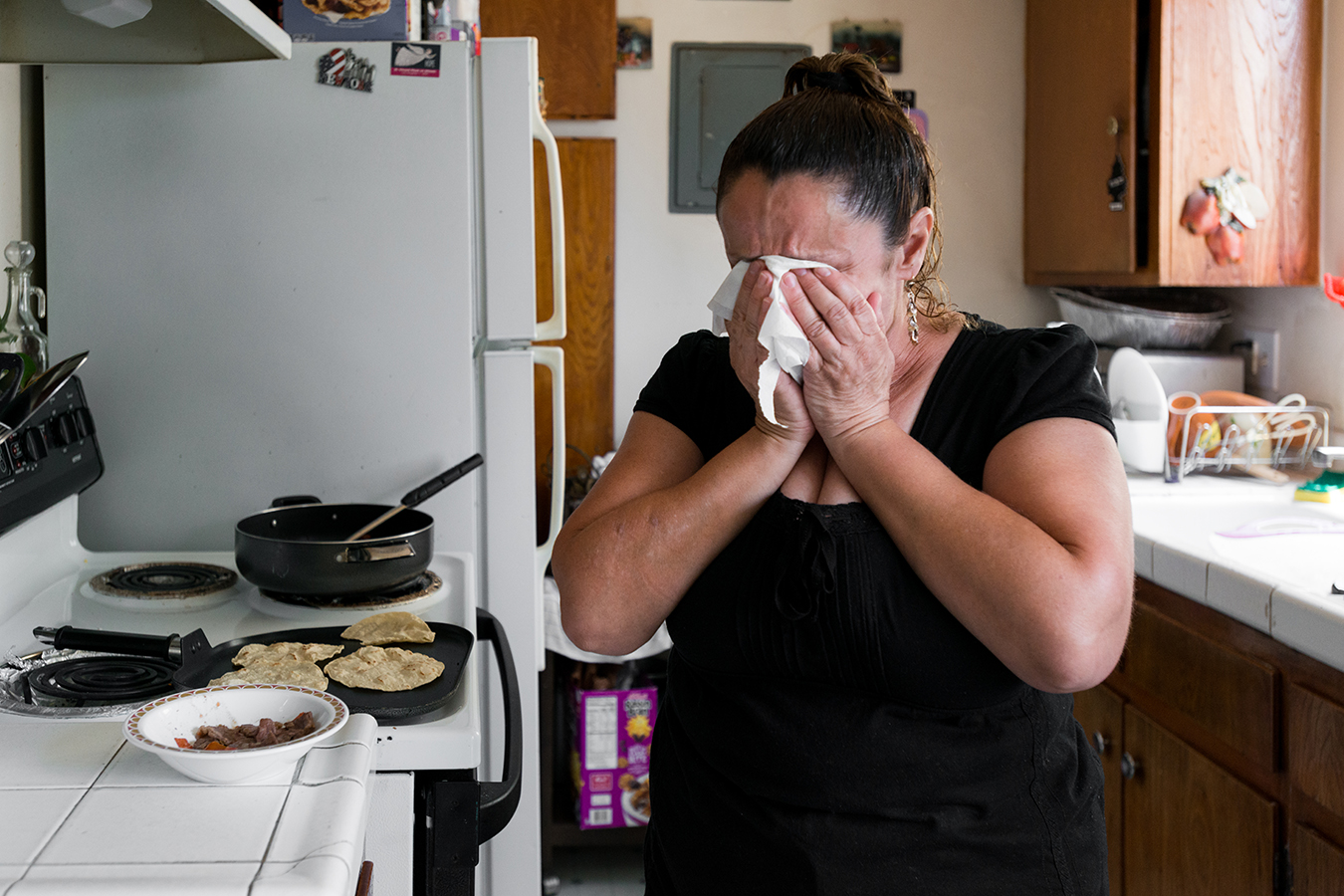 She volunteers as a guide for people recently diagnosed with blindness at the Braille Institute, teaching them how to cook, shower and groom themselves in pursuit of self-sufficiency. Angulo would like to have a job but said she lacks opportunities.

She’s also wary of any organization that offers medical or financial assistance to undocumented immigrants. “They ask for all my information and, in the end, they say I don’t qualify,” she said. “Being blind and without papers makes me feel especially vulnerable.”