Impact of opioid epidemic on children varies by state

A new report released by the Drug Enforcement Administration finds most overdose deaths are caused by prescription drugs, including opioids. While opioid abuse continues to plague certain states more than others, each state is unique in how it attempts to stem the crisis and its effect on families. These differences have resulted in significant variation across the country between opioid prescription rates and the number of children placed into foster care.

A new study published in Child Abuse and Neglect finds between 2010-2015, 60 opioids were prescribed for every 100 people in California and New York. While in West Virginia, Kentucky and Louisiana, it was more than 100 prescriptions per 100 people.

Lead author, Troy Quast, Ph.D., Associate Professor in the University of South Florida College of Public Health, found the county average annual number of children removed due to parental substance abuse also varied substantially. One out of every 2000 children were impacted in California and New York and it was five out of every 2000 in West Virginia. 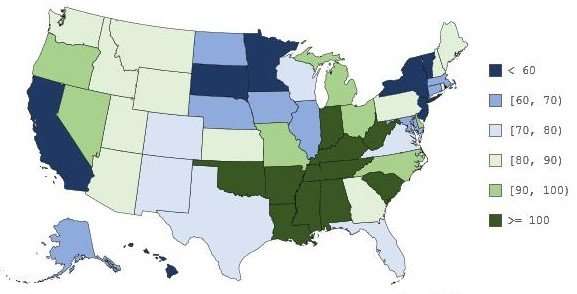 While Dr. Quast’s study does not definitively identify the reasons for such variation, he believes differences in state criteria for removing children from their homes plays a role.

“States also differ in their legal treatment of opioid prescriptions through prescription drug monitoring programs and legislation regarding pill mills,” said Quast. “The differences could also reflect varying stages of the opioid epidemic.”

Quast believes higher opioid prescription rates in some states may be associated lower levels of illicit opioid consumption. Given the especially potentially drastic effects of illicit opioids on families, prescribed opioids may be less likely to lead to a child removal.