The Weirdest Things Newborns Do — Including Fake Diarrhea

Bringing home a newborn baby is one of the most exciting things you’ll ever do. And, as you’ll quickly find out, it’s also one of the scariest things you’ll ever do, especially when you’re an inexperienced new mom. The truth is is that while newborns are adorable tiny humans who smell wonderful and sleep the majority of the time, they can also do some really strange things that you might not be expecting to encounter.

You might be ready for the middle-of-the-night feedings, the constant dirty diapers, and the never-ending spit-up, but there are plenty of other odd things newborns do that can leave you feeling flustered at best and panicked and scared at worst. It’s not unusual to feel the urge to call your pediatrician when experiencing some of these newborn quirks, but it’s also important to remember that many of the weird things babies do are actually completely normal and probably even harmless.

In other words: There may not be any reason to feel alarmed if you experience the below. Of course, you should always give your pediatrician a call if you think something is really wrong, but if your baby is doing any of the below things, rest assured knowing it’s par for the course.

They can stop breathing for up to 10 seconds at a time.

Ten seconds doesn’t seem like a lot of time until you’re anxiously waiting for your baby to take their next breath. If you notice small lapses in breathing like this, you aren’t alone. Miami-based pediatrician Dr. Gary Kramer says this is nothing to stress over, explaining, “Newborns may breathe erratically in the first months of life, alternating between slow and fast breathing and even having periods up to 10 seconds during which they do not breathe.”

You may also notice that they’re breathing this way at night, while they’re in a deep sleep. Fortunately, it won’t last long. Dr. Kramer says, “This is part of normal development referred to as ‘periodic breathing,’ and is entirely normal. They will eventually grow out of this.”

They sleep with their eyes open.

It can be alarming to glance over at your peacefully sleeping baby, only to realize their eyes are open. But don’t worry: this isn’t a sign of a sleep disorder or anything more serious. It’s just the way newborns sleep (as it turns out, the phrase “sleeping like a baby” doesn’t exactly mean a restful sleep). “Newborns cycle through sleep different than older infants do,” says Carrie Bruno, RN, IBCLC, and founder and CEO of The Mama Coach. “Because their brains are developing at a rapid pace, they spend 50% of their sleeping hours in something called ‘active sleep.’”

According to Bruno, active sleep means newborns will appear pretty restless, kicking and grunting without waking themselves up. That’s also the reason they can sleep with their eyes open. While it might be creepy, it’s also necessary. Bruno says, “Active sleep is frequent and important in newborn sleep as it stimulates regions in the brain that contribute to learning.”

They can spit up out of their nose and appear to be choking when they’re not.

Every parent’s worst nightmare is their baby choking. Sometimes, newborns can seem like they’re choking even if they’re perfectly fine, which just seems like a cruel trick of nature. If you notice them gagging with spit-up coming out of their nose, you don’t need to panic right away. Dr. Kramer says, “This is entirely normal, as the nasopharyngeal is one passageway. Infants do not have a way of regulating where the emesis will go. This does not mean that they are choking.”

It should also comfort you to know that it’s actually difficult for healthy newborns to choke. “Parents are worried that babies will aspirate, but the likelihood of that happening in a neurologically normal baby is rare due to the fact that the gag reflex will protect against that,” says Dr. Kramer. If your baby’s complexion is red or pink, that’s a good sign – you should worry if their complexion is white or blue.

They sneeze all the time.

If you notice your baby is sneezing quite often, don’t automatically assume that they picked up a cold in their first few weeks. It’s actually just something infants do. “They breathe through their noses and their nasal passages are so small, you will hear all sorts of snorting and congested sounds,” says Dr. Alison Mitzner, MD, board-certified pediatrician. So don’t worry: your sneezing and stuffy baby is almost definitely perfectly healthy. 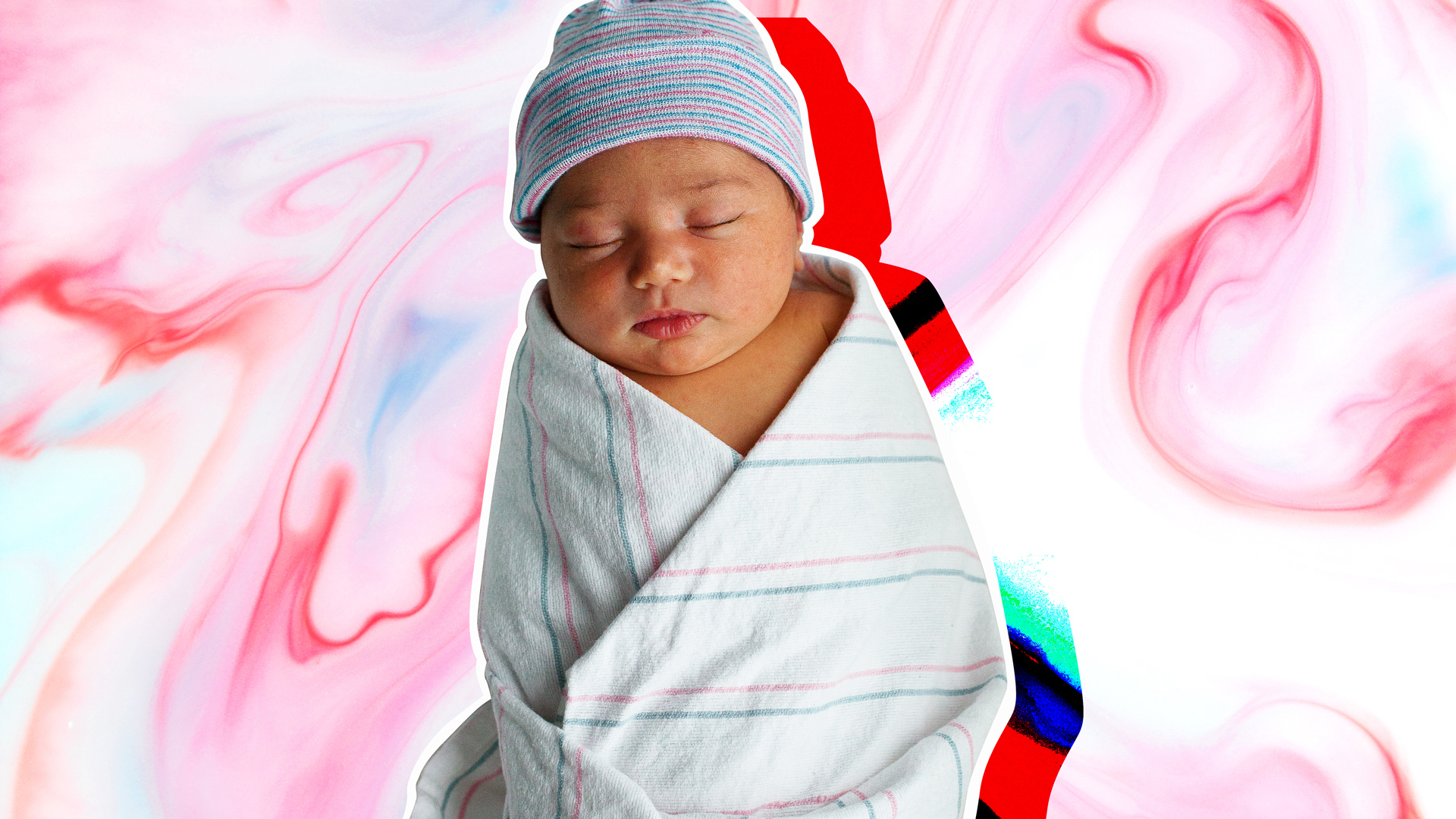 Spend a few minutes watching your little one sleep without a swaddle, and you’ll likely notice that they throw their arms out in a dramatic way, as if they’ve just been startled. This is called their Moro reflex, and is completely normal up to about three months old. Dr. Mitzner says, “It is used to assess the baby’s central nervous system at birth.”

Their Moro reflex can be elicited when they are startled, or it can happen when the baby feels a sense of falling. Dr. Mitzner says, “Your pediatrician will check this and ensure the Moro reflex is present and normal.” So, basically, you want them to do this.

They are very, very noisy sleepers.

At this point, it’s pretty clear that infant sleep is anything but peaceful. They can keep their eyes open, they might breathe erratically, they can startle easily, and they make tons of little noises. While some of those noises might seem worrisome, they’re probably just normal baby behavior. “In the first months of life, babies breathe through their noses, which are narrow,” says Dr. Kramer, adding that it can often cause them to whistle.

According to Dr. Kramer, another cause of the noises is something called “laryngomalacia,” which basically means that their upper airway is narrow and floppy. “While lying down, they experience some collapse of the airway, which creates a sensation of noisy breathing due to the turbulence of the airflow,” says Dr. Kramer. “They do, in fact, grow out of this by four to six months.”

They have swollen genitals.

Don’t be alarmed by the appearance of your baby’s not-so-tiny genitals, whether they’re male or female. This is just caused by the natural process of squeezing through a tight birth canal. Bruno says, “The swelling can be caused by maternal hormones or from a prolonged labor where mom receives more fluids. Usually this swelling resolves within two weeks as the hormones from pregnancy and birth disappear, and the extra fluids from birth reabsorb.”

They have what seems like diarrhea, but it’s normal.

How many bowel movements can a small infant possibly make? As it turns out, quite a lot, especially in those first few weeks. Dr. Mitzner says that their diapers will need to be changed often, and their stool might look like diarrhea. She explains, “Breast fed babies typically have a bowel movement after every feeding. It can be very loose, mustardy yellowish, soft, and watery, and parents may think it is diarrhea, but it is not.”

They spit up all day long.

You might think you’re ready for baby spit-up, but you probably aren’t prepared for just how much of it there is. Sometimes it feels like they’re spitting up so much that you wonder how they could possibly be digesting that much food. “Newborn babies spit up because their lower esophageal sphincter (the ring of muscle between their stomach and their espogahus) needs time to strengthen,” says Bruno. “It often isn’t strong enough and your baby’s belly full of milk can come right back up.”

You’ll notice spitting up even more often if your baby gulps in a lot of air while drinking, which can cause gas. Bruno notes that as long as your baby feeds well and is regularly gaining weight, there’s nothing to worry about. If your baby isn’t interested in feeding and isn’t gaining weight, then it’s something you should speak to a pediatrician about.

They can have a face full of acne.

In those first few weeks with your little one, you might start to wonder where the expression “baby soft skin” actually came from. It’s not abnormal for your baby’s face to resemble a teenager’s face, full of little bumps that look like pimples. And they kind of are. Bruno says, “Around 20% of newborns experience newborn acne and it usually occurs between two and six weeks. We aren’t really sure what causes newborn acne, but we think it occurs due to stimulation of newborn’s sweat glands from mom’s hormones, or the inflammatory reaction to yeast that can colonize on baby’s skin.”

Baby acne, as it’s often called, looks like little red, raised bumps, and can appear all over their tiny face and chest. In general, Bruno says it will clear up on its own. If you really want to do something, keep their skin moisturized with a non-scented, hypoallergenic baby lotion, and avoid picking at it at all costs.

Their skin can peel off.

Does it look like your baby is getting over a serious case of dry skin? That’s because they are. Dr. Mitzner says that sitting around in amniotic fluid for nine months can leave them with very dry, flaky skin when they’re brought into the world. “The peeling does resolve on its own and the skin beneath is soft and normal. There is no treatment necessary,” says Dr. Mitzner, adding that it should resolve in a few weeks.

There’s a spot on their head that pulses like it’s alive.

You might know that all babies have a soft spot on their head, but did you know that it actually moves? It might be slightly alarming to notice their head pulsing, but it’s also normal, and is a glimpse at their heartbeat. “Babies are born with open spots on their skulls called fontanelles, which fuse shut usually around the age nine to 18 months,” says Bruno. “They need those open spots to make space for their rapidly growing brains.” 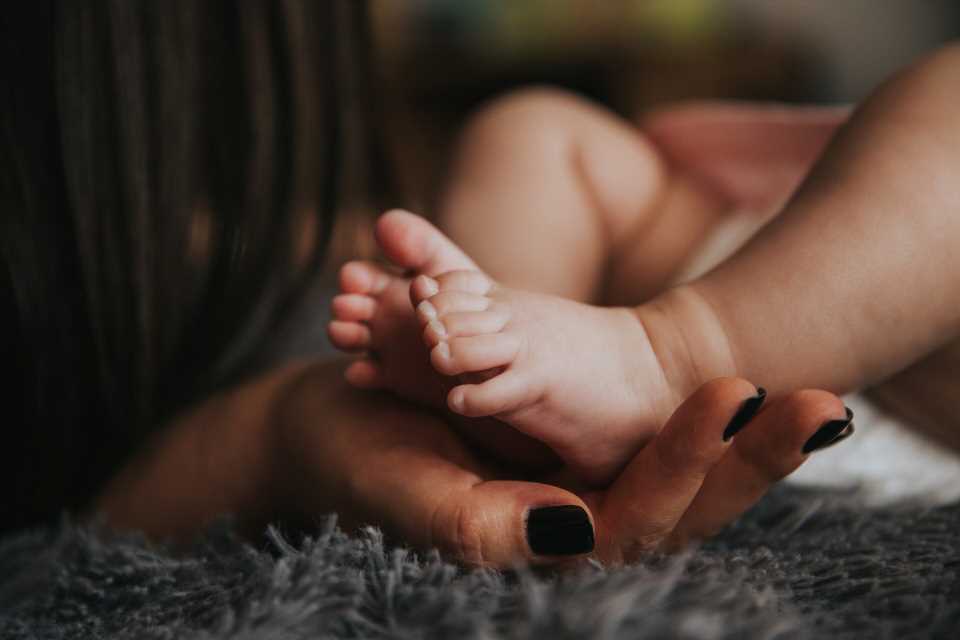