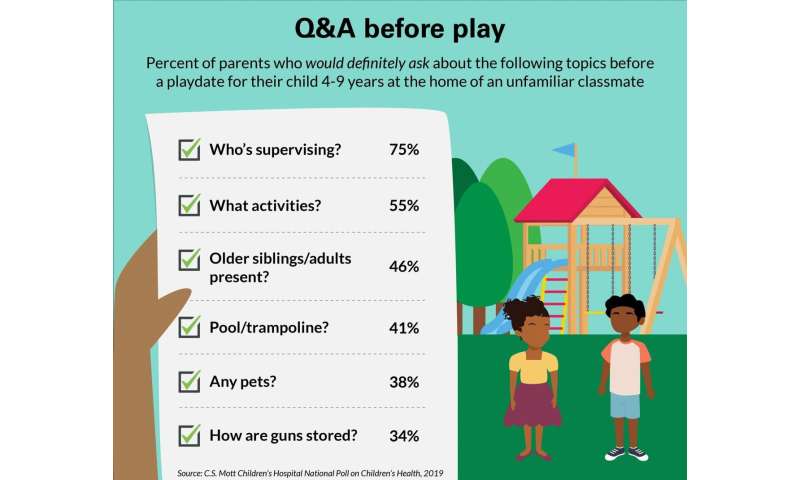 The new school year often leads to playdate invitations, sometimes between families who don’t know each other.

But parents don’t always agree to such invites, with nearly half in a new national poll saying they have declined a playdate because they didn’t feel comfortable leaving their child in the other parent’s care.

Parents’ top concerns about playdates include children being unsupervised, hearing inappropriate language, getting into medications and harmful substances, and getting injured, according to the C.S. Mott Children’s Hospital National Poll on Children’s Health at the University of Michigan.

Despite such concerns, just 1 in 4 parents have been asked about safety issues by another parent before a playdate, the poll suggests.

“Playdates allow children to develop independence, gain experience interacting with other children in an unstructured setting, and have fun with a friend,” says Mott Poll co-director Sarah Clark. “Before parents send their child on a playdate, they need to feel confident that their child will be safe and appropriately supervised.”

“Making sure children will be safe and well supervised during a playdate often means asking the host parents about key safety issues. However, our poll suggests that many parents are not proactive when it comes to having these conversations.”

Influences on parent decisions about playdates include the child being shy around strangers (17%), being afraid of certain pets (11%), having a food allergy/special diet (8%), or having a health condition (6%).

“Many parents seem to be cautious about sending their child on a playdate at a new friend’s home, especially if they aren’t familiar with the family hosting the playdate,” Clark says. “There are several steps they can take ahead of time, including meeting and talking to the family, that may help them decide how to respond to a play date invitation.”

But there are other aspects that parents should consider about playdates, such as supervision, risks related to activities such as trampolines and pools and whether the host family owns harmful medications or guns—and if so, whether they are locked and stored safely away from the children.

However, few parents seem to be asking these questions, Clark says, which may reflect their worry about the host family’s reaction. However, three quarters of parents in this poll said they wouldn’t be offended if another parent asked about playdate safety.

Clark suggest parents have a plan for a pre-playdate conversation to go over concerns.

“It may be helpful to develop a checklist to guide the conversation,” Clark says. “This could include asking questions about supervision, weapon and medication storage and the family’s rules about potentially hazardous activities like using a trampoline.