For Silicon Valley parents, ‘the devil lives in our phones’

A dark consensus about screens and kids begins to emerge in Silicon Valley, writes Nellie Bowles.

SAN FRANCISCO — The people who are closest to a thing are often the most wary of it. Technologists know how phones really work, and many have decided they don’t want their own children anywhere near them.

A wariness that has been slowly brewing is turning into a regionwide consensus: The benefits of screens as a learning tool are overblown, and the risks for addiction and stunting development seem high. The debate in Silicon Valley now is about how much exposure to phones is OK.

“Doing no screen time is almost easier than doing a little,” said Kristin Stecher, a former social computing researcher married to a Facebook engineer. “If my kids do get it at all, they just want it more.”

Stecher, 37, and her husband, Rushabh Doshi, researched screen time and came to a simple conclusion: they wanted almost none of it in their house. Their daughters, ages 5 and 3, have no screen time “budget,” no regular hours they are allowed to be on screens. The only time a screen can be used is during the travel portion of a long car ride (the four-hour drive to Tahoe counts) or during a plane trip.

Recently she has softened this approach. Every Friday evening the family watches one movie.

There is a looming issue Stecher sees in the future: Her husband, who is 39, loves video games and thinks they can be educational and entertaining. She does not.

“We’ll cross that when we come to it,” said Stecher, who is due soon with a boy.

Some of the people who built video programs are now horrified by how many places a child can now watch a video.

Asked about limiting screen time for children, Hunter Walk, a venture capitalist who for years directed product for YouTube at Google, sent a photo of a potty training toilet with an iPad attached and wrote: “Hashtag ‘products we didn’t buy.’”

Athena Chavarria, who worked as an executive assistant at Facebook and is now at Mark Zuckerberg’s philanthropic arm, the Chan Zuckerberg Initiative, said: “I am convinced the devil lives in our phones and is wreaking havoc on our children.”

Chavarria did not let her children have cellphones until high school, and even now bans phone use in the car and severely limits it at home.

She said she lives by the mantra that the last child in the class to get a phone wins. Her daughter did not get a phone until she started ninth grade.

“Other parents are like, ‘Aren’t you worried you don’t know where your kids are when you can’t find them?’” Chavarria said. “And I’m like, ‘No, I do not need to know where my kids are every second of the day.’”

For longtime tech leaders, watching how the tools they built affect their children has felt like a reckoning on their life and work.

Among those is Chris Anderson, the former editor of Wired and now the chief executive of a robotics and drone company. He is also the founder of GeekDad.com.

Technologists building these products and writers observing the tech revolution were naive, he said.

“We thought we could control it,” Anderson said. “And this is beyond our power to control. This is going straight to the pleasure centers of the developing brain. This is beyond our capacity as regular parents to understand.” 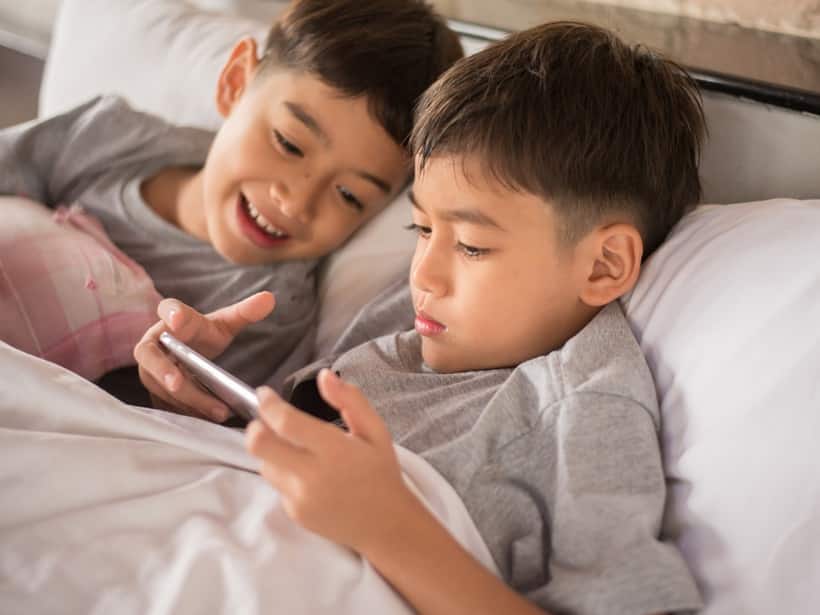 He has five children and 12 tech rules. They include: no phones until the summer before high school, no screens in bedrooms, network-level content blocking, no social media until age 13, no iPads at all and screen time schedules enforced by Google Wifi that he controls from his phone. Bad behavior? The child goes offline for 24 hours.

“I didn’t know what we were doing to their brains until I started to observe the symptoms and the consequences,” Anderson said.

“This is scar tissue talking. We’ve made every mistake in the book, and I think we got it wrong with some of my kids,” Anderson said. “We glimpsed into the chasm of addiction, and there were some lost years, which we feel bad about.”

His children attended private elementary school, where he saw the administration introduce iPads and smart whiteboards, only to “descend into chaos and then pull back from it all.”

This idea that Silicon Valley parents are wary about tech is not new. The godfathers of tech expressed these concerns years ago, and concern has been loudest from the top.

Tim Cook, CEO of Apple, said this year that he would not let his nephew join social networks. Bill Gates banned cellphones until his children were teenagers, and Melinda Gates wrote that she wished they had waited even longer. Steve Jobs would not let his young children near iPads.

But in the past year, a fleet of high-profile Silicon Valley defectors have been sounding alarms in increasingly dire terms about what these gadgets do to the human brain. Suddenly rank-and-file Silicon Valley workers are obsessed. No-tech homes are cropping up across the region. Nannies are being asked to sign no-phone contracts.

Those who have exposed their children to screens try to talk them out of addiction by explaining how the tech works.

John Lilly, a Silicon Valley-based venture capitalist with Greylock Partners and the former CEO of Mozilla, said he tries to help his 13-year-old son understand that he is being manipulated by those who built the technology.

“I try to tell him somebody wrote code to make you feel this way — I’m trying to help him understand how things are made, the values that are going into things and what people are doing to create that feeling,” Lilly said. “And he’s like, ‘I just want to spend my 20 bucks to get my Fortnite skins.’”

And there are those in tech who disagree that screens are dangerous. Jason Toff, 32, who ran the video platform Vine and now works for Google, lets his 3-year-old play on an iPad, which he believes is no better or worse than a book. This opinion is unpopular enough with his fellow tech workers that he feels there is now “a stigma.”

“One reaction I got just yesterday was, ‘Doesn’t it worry you that all the major tech execs are limiting screen time?’” Toff said. “And I was like, ‘Maybe it should, but I guess I’ve always been skeptical of norms.’ People are just scared of the unknown.”

“It’s contrarian,” Toff said. “But I feel like I’m speaking for a lot of parents that are afraid of speaking out loud for fear of judgment.”

He said he thinks back to his own childhood growing up watching a lot of TV. “I think I turned out OK,” Toff said.

Renee DiResta, a security researcher on the board of the Center for Humane Tech, won’t allow passive screen time, but will allow short amounts of time on challenging games.

She wants her 2- and 4-year-old children to learn how to code young, so she embraces their awareness of gadgets. But she distinguishes between these types of screen use. Playing a building game is allowed, but watching a YouTube video is not, unless it is as a family.

He had read studies on how learning a second language at a young age is good for the developing mind, so his daughter watches Italian-language movies and TV shows.

“For us, honestly, me and my wife were like, ‘Where would we like to visit?’” Barbieri said.