Pulpitis is a dental condition which results in an inflamed dental pulp. The dental pulp is the innermost and vital part of the tooth structure, which is supplied by the blood vessels, and which contains odontoblast cells, interstitial fluid, fibroblasts, and ground substances. Tooth injury due to dental caries is among the primary reasons for the onset of pulpitis. 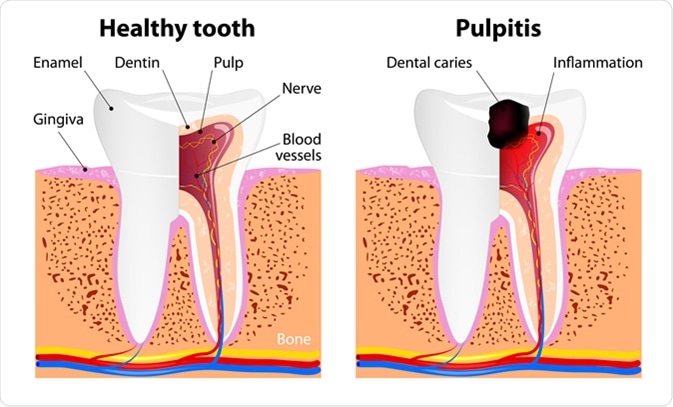 How does dental caries result in pulpitis?

The oral cavity naturally contains a host of bacteria. These bacterial counts flare up in the presence of foods containing high sugar and starch content. In the presence of high sugar, these bacteria produce acids which eat away the tooth coverings, resulting in tooth decay or caries. Once caries advances to the deepest layer of the tooth (pulp), it results in inflammation of the pulp which is referred to as pulpitis.

What are the various causes of pulpitis?

The causes of pulpitis are broadly classified into physical, chemical and bacterial causes.

Pulpitis due to thermal causes occurs in situations such as excessive liberation of heat during dental procedures like cavity preparation during the treatment of caries, or because of the heat produced during the polishing of a tooth filling.

Barodontalgia is the phenomenon in which tooth pain occurs at high altitudes due to the low atmospheric pressure. Chronic pulpitis may be symptomless at the lower levels; however, such teeth may become painful at higher altitudes above 5,000-10,000 feet.

What are the two forms of pulpitis?

There are two forms of pulpitis, namely, reversible and irreversible pulpitis. The latter is further classified into symptomatic and asymptomatic pulpitis.

Based on the clinical findings, if the pulp tissue fails to repair and is painful, the condition is referred to as symptomatic irreversible pulpitis. Some of the specific features of this disorder include excruciating pain on contact with hot stimuli, which persists for 30 seconds or more. The pain can also begin spontaneously, and may spread to other parts. It has also been observed that the pain may be aggravated by a change in body position. Usually, teeth affected by irreversible pulpitis are challenging to diagnose primarily because the infection has not reached the bottom portion of the tooth structure, referred to as the periapical region.

Asymptomatic irreversible pulpitis is also diagnosed on the basis of the clinical examination. Here there is no pain or discomfort at the time of testing, and the affected teeth are detected by thermal testing.

Reversible pulpitis is the condition in which the dental pulp is inflamed, but reverts to normal upon the removal of the offending factors. The inflammation of the pulp tissue in reversible pulpitis is generally mild to moderate. For instance, one may experience discomfort on the consumption of cold or sweet foods. However, the pain is relieved upon removal of the stimulus. In general, reversible pulpitis is quick to heal with the correction of the root cause, that is, once the underlying condition is treated. Nonetheless, periodic evaluation is necessary to ensure the complete healing of the condition.