Also referred to as chemical messengers, neurotransmitters are chemical agents made and released by neurons. They are stored in vesicles at the terminal end (presynaptic terminal) of a neuron. Their release stimulates nearby neurons, muscle cells or gland cells, thereby allowing electric nerve impulses to be passed from one cell to another. 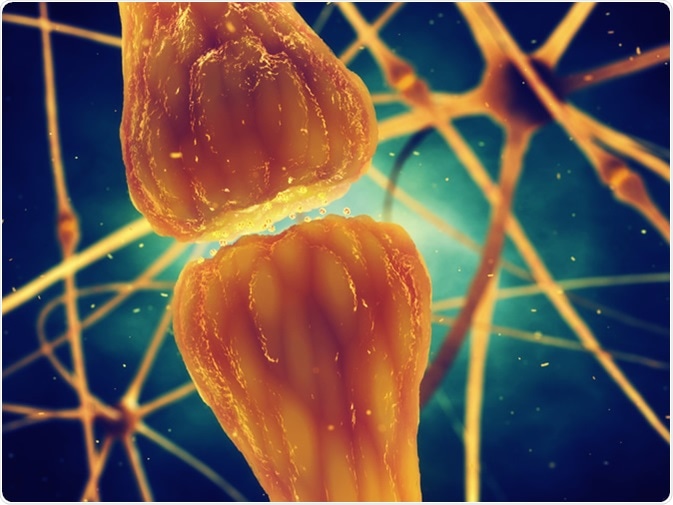 Synaptic transmission is the biological process by which neurotransmitters are released by a neuron and activate the receptors of another neuron. Image Credit: Nobeastsofierce / Shutterstock

How does neurotransmitter signaling occur?

When an electrical impulse reaches the presynaptic terminal of a nerve cell, the vesicles move through the cytoplasm and form a connection with the presynaptic terminal membrane and release neurotransmitters that move through the membrane into the synaptic cleft. They migrate across the synaptic cleft to the postsynaptic membrane of the neighboring nerve cell and bind to receptors on that membrane, which activates them to either open or close ion channels in the membrane.

The third type of neurotransmitter – neuromodulators – work differently; they are not confined to the synaptic cleft between just two nerve cells but can regulate many neurons simultaneously.

All neurotransmitters can bind to several different types of receptors and are therefore functionally versatile.

Examples of the different types of neurotransmitters include the amino acids glutamate and glycine; the monoamines dopamine and norepinephrine, the neuropeptides somatostatin and opioids, the purine adenosine triphosphate (ATP), the gas nitric oxide and the trace amine tryptamine.

The main excitatory transmitter in the central nervous system is the amino acid glutamate, which plays an important role in learning and memory. The main inhibitory transmitter is gamma-aminobutyric (GABA) – a derivative of glutamate. GABA regulates the inhibitory-excitatory balance that is needed to maintain normal brain function.

Another major inhibitory transmitter in the central nervous system is glycine. In many of the neurons in the spinal cord and brainstem, glycine co-exists with GABA. Glycine exerts the fast postsynaptic inhibition that is needed to regulate the excitability of neurons. It plays an essential role in controlling auditory processing, pain transmission, metabolism, and many other processes.

The monoamine dopamine is an important neuromodulator involved in many brain functions, with dopamine pathways regulating motor control, motivation, reward and activities such as walking and talking.

Also called norepinephrine, the monoamine noradrenaline is the main neurotransmitter throughout the sympathetic nervous system where it exerts its effects on various organs to regulate several functions. It increases the force of skeletal muscle contractions and increases both the rate and force of heart contractions. Norepinephrine activity is essential to the fight-or-flight response, where the body gets ready to respond to or avoid a threat.

The monoamine serotonin is a widely distributed inhibitory neurotransmitter in the central nervous system that is involved in regulating a variety of physiological functions including gastrointestinal function, motility, memory, sleep, mood, and reward processing. Serotonin is involved in a wide range of pathways, including body-weight regulation, aggression, suicidality, anxiety, depression, alcoholism, and obsessive-compulsive disorder.

The monoamine histamine is an excitatory neurotransmitter in the central nervous system involved in the regulation of metabolism, temperature,  hormones and the sleep-wake cycle.

Sally has a Bachelor's Degree in Biomedical Sciences (B.Sc.). She is a specialist in reviewing and summarising the latest findings across all areas of medicine covered in major, high-impact, world-leading international medical journals, international press conferences and bulletins from governmental agencies and regulatory bodies. At News-Medical, Sally generates daily news features, life science articles and interview coverage.