What is the deadliest animal on earth? It’s a question that brings to mind fearsome lions, tigers, sharks and crocodiles. But the answer is an animal that is no more than 1 centimeter long.

A few mosquito species, out of the thousands that populate different environments, are the deadliest animals on earth. Anopheles mosquitoes alone, transmit malaria through their bite and annually infect more than 200 million people, and are responsible for 400,000 deaths per year, of which 70 percent are children under the age of five.

We are geneticists at Imperial College in London who focus on the mosquito and its role as a vector of disease. For more than 20 years, we’ve been focusing on the development of genetically manipulated mosquitoes. That is because decades of malaria control has taught us that the most effective strategy to prevent malaria is to control the mosquito itself. Years of research has led to the development of the ultimate and sophisticated genetic tool called “gene drive.” When correctly engineered, it can eliminate mosquito populations housed in cages in the lab.

We fight mosquito-borne diseases every day

Only female mosquitoes bite humans. They drink human blood to gather nutrients to produce their eggs. If the female mosquito is infected with a virus or a parasite, it will pass the infection onto the bitten person. Later, if an uninfected mosquito bites the newly infected human, it will pick up the microorganism and it too will be able to spread the disease to other individuals.

For a disease like malaria, which is a threat to nearly half of the world’s population, public health initiatives have used a variety of methods to target the malaria parasite itself, like vaccines and drugs. Other methods – including pesticides, fumigation, bed nets and removal of mosquitoes’ habitats – strive to reduce either the contact with, or the number of, mosquitoes. But we believe that targeting the mosquito is the most effective way to reduce malaria cases worldwide.

Now in Africa, where the malaria burden is highest, spraying insecticide indoors and sleeping under insecticide-laced bed nets, are the most effective ways to rapidly reduce malaria transmission. These control measures and interventions have helped reduce the malaria burden dramatically in many places. Since 2010 the mortality rates caused by malaria have fallen by 35 percent among children under the age of 5.

These methods, though, are not sustainable and they need to be implemented on a large scale to reach their full potential. This became obvious between 2014 and 2016, which marked the first time since 2010 in which malaria cases have increased, breaking the declining trend observed during the years before. Mosquitoes are developing resistance to antimalarial drugs and insecticides, and we are running out of options and time.

To achieve malaria eradication, public health researchers must upgrade our arsenal. To move toward this goal we, the Crisanti lab here at Imperial College, have been working on a plan to do just that.

Recently, a technology called CRISPR has been developed that allows scientists to edit DNA with great efficiency. Researchers across the world are using CRISPR to modify mosquito DNA with the goal of eliminating mosquito-borne diseases, such as malaria. In our lab, we have developed what is perhaps the most advanced use of the technology ever proposed. It is called “gene drive.” This type of genetic modification has the ability to spread a trait in a wild population, overriding the classic laws of heredity. 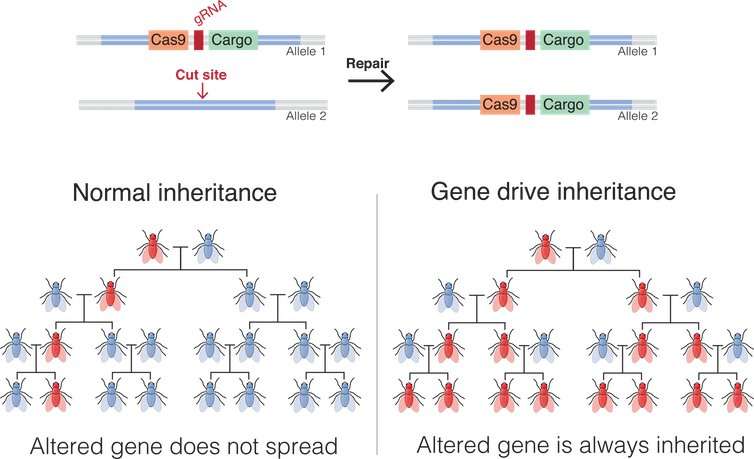 DNA that is transmitted from one parent, from one generation to the next via the classic laws of heredity, is inherited by only half of the progeny of each generation. This keeps the frequency of that genetic modification or trait in the population of mosquitoes the same.

Gene drives are inherited by more than 50 percent of the progeny. This gives them the ability to progressively increase the frequency of a trait over subsequent generations, which is an advantage over the potential use of other GM mosquitoes.

We have designed a gene drive that targets fertility genes that are essential for the development of the female mosquito. When these genes are disrupted, the female insect is unable to bite or produce offspring.

The advantage of gene drives is that we can target only the Anopheles gambiae species – one of the primary vectors that carry the disease in sub-Saharan Africa – without affecting those that do not.

When we tested our technology in the lab, we were able to spread this trait to 100 percent of the mosquito population in the cages. The consequence of producing normal male mosquitoes and sterile females was that we brought the population down to zero within six months.

This is the first time that a population has been suppressed using a gene drive, albeit in the lab.

Gene drive is a fast-moving and powerful genetic technology. The ability to transform natural populations without constant human intervention, make them ideal to supplement the current tools and methods used to fight infectious diseases, and reduce their economic and ecological burden.

Even though the suppression of caged mosquito populations in the lab is a landmark achievement, an actual field release of a gene drive is at least a decade far in the future.

Because they can spread on their own, and over potentially large geographical areas, the technology raises potential ethical concerns over their use. For example, who decides when a gene drive is released if full consensus from the communities affected by it is not achieved? These issues are widely debated by scientists, ethicists, regulators and those who may be affected by the use of gene drive technology.