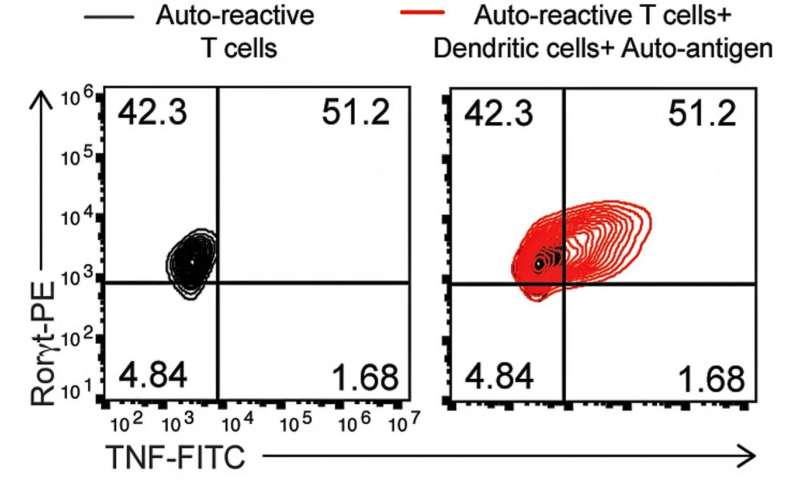 “This study opens new avenues for developing more effective autoimmune therapies. To this end, we now are testing the molecular process we identified in different kinds of human cells, including building collaborations with other researchers to collect donated cell samples from people who have multiple sclerosis, arthritis and other autoimmune diseases,” said lead investigator Chandrashekhar Pasare, DVM, Ph.D., a member of the Division of Immunobiology at Cincinnati Children’s and co-director of the Center for Inflammation and Tolerance.

For the past decade or so, scientists and physicians have linked the immune system protein IL-1b (cytokine interleukin-1 beta) with several autoimmune diseases. Drugs and antibodies that block or inhibit IL-1b are currently used to manage symptoms in people with different types of autoimmune disease, according to researchers.

But until the current study, it wasn’t known how IL-1b is made in the body, especially during autoimmunity. This limits the ability to develop effective therapeutics for autoimmune diseases, according to researchers.

Previously it was thought that IL-1b production required activation of a group of immune system protein molecules that make up structures called inflammasomes. It turns out the inflammasomes, which act as system sensors that activate inflammation, can cause what are called auto-inflammatory diseases. These are distinct from auto-immune diseases.

Pasare and his colleagues found out that instead of inflammasomes, a different molecular pathway cranks up inflammation during autoimmunity while working completely independently from inflammasomes. That molecular process was triggered by interactions between myeloid cells and CD4-positive T cells, which become primed to attack harmful bacteria, viruses and other microorganisms. Unfortunately, in the case of autoimmunity, the immune system attacks and eventually destroys healthy tissues erroneously targeted as harmful.

When it’s not fulfilling its role in driving autoimmunity, IL-1b usually works as a stimulator of anti-microbial immunity. But during autoimmune processes, the authors report they discovered in their mouse models that autoreactive T cells, macrophage and dendritic cells in the immune system work through two other molecules—TNF (tumor necrosis factor) and FasL (fas ligand)—to produce overabundant amounts of IL-1b.

“This means our findings have two previously unknown implications,” Pasare explained. “We show for the first time that IL-1b can be made in the absence of infection and that T cells are major drivers of IL-1b in an autoimmune setting.”

The study also underscores that therapies targeting IL-1b production by inflammasomes are going to be limited in their effectiveness in treating autoimmune disease. This is because the Pasare team’s findings show that auto-reactive T cells have their own mechanisms to drive inflammation and work independently of inflammasomes.

Pasare said that targeting the TNF and FasL pathway of IL-1b production is more likely to be an effective way of treating auto-immune diseases in humans.