When patients with dependence on alcohol, cocaine or nicotine are shown drug cues, or images related to the substance, an area of their brain known as the medial prefrontal cortex (mPFC) shows increased activity, report investigators at the Medical University of South Carolina (MUSC) in an article published online September 7, 2018 in Translational Psychiatry.

“We asked the question: ‘Which brain area is more engaged when these patients see a drug cue versus a neutral cue?'” explains Colleen A. Hanlon, Ph.D., associate professor in the Department of Psychiatry and Behavioral Sciences at MUSC and senior author on the study.

To answer this question, Hanlon and her team imaged areas of increased brain activity, or ‘hot spots,’ in response to drug cues. They recruited three categories of substance users: chronic cocaine users, heavy alcohol users and cigarette smokers. They imaged brain activity using functional magnetic resonance imaging (fMRI). During fMRI sessions, the participants were shown images of cocaine-, alcohol- or cigarette-related cues alternated with matched neutral images. For example, a cue for cigarette smokers was an image of a person holding a cigarette, while the matched neutral image showed a person holding a pencil. The physiological reaction to drug cues, or cue-reactivity, is indicative of substance use disorder and often leads to drug use.

Participants in all three cohorts of substance use (cocaine, nicotine, and alcohol) exhibited ‘hot spots’ in the mPFC when cues were presented. 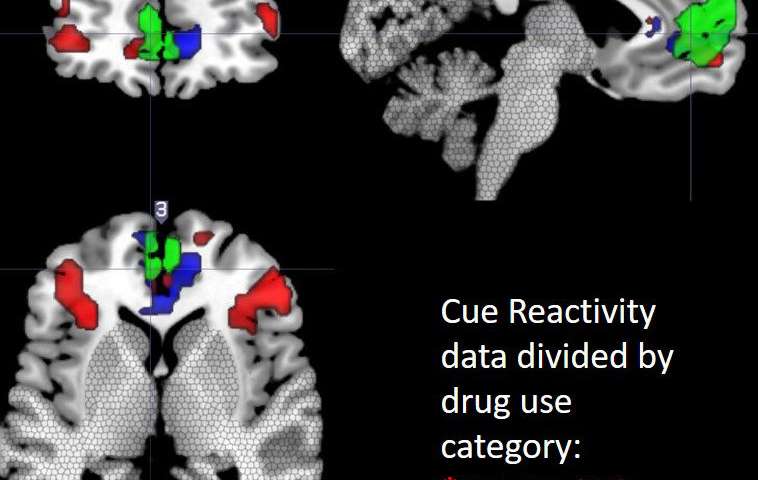 Hanlon and her team are dedicated to mapping neuronal circuits using neuroimaging techniques to better understand addiction. Specifically, they aim to find a region of the brain that can be targeted by transcranial magnetic stimulation (TMS) therapy. TMS is a noninvasive procedure used to modulate neural networks. It works by applying a magnetic field to a specific area of the brain to either stimulate or attenuate electrical activity. Because many of the ‘hot spots’ identified by the study were located at a depth of five centimeters or less, they can be reached by TMS therapy, showing the feasibility of using TMS for substance use disorder.

TMS has few side effects and is currently used as a treatment for depression. The most common side effects are headaches that can occur post-procedure. A few people may also be susceptible to seizure and are advised to abstain from TMS therapy.

The mPFC is in the frontal lobe of the brain. Its functions includes memory retrieval and decision-making, but it also plays a role in the limbic reward circuit, or the pleasure-seeking pathway that is activated by addictive drugs. Hanlon’s neuroimaging study has led to clinical trials targeting the mPFC with low-frequency TMS to reduce excitability.

“As we move forward into clinical trials, these findings suggest that, by modulating the mPFC, we might be able to help multiple forms of substance-dependent populations, rather than having to reinvent the wheel for every particular disease,” says Hanlon.

Phase 2 clinical trials in patients seeking treatment for cocaine or alcohol use are under way at MUSC and the Ralph H. Johnson VA Medical Center. Patients undergo fMRI scans during the first week of the study and are then randomized to receive 10 days of TMS or sham therapy. Patients are scanned again at the end of their inpatient treatment with follow-up scans one and two months post-treatment. The desired outcome is for patients receiving TMS therapy to show reduced cue-reactivity in their follow-up scans, along with increased sobriety time after treatment.

Hanlon is also currently involved with another clinical trial at MUSC focused on using TMS therapy for nicotine dependence. This trial, called QuitFast, provides participants with multiple sessions of TMS per day to support them through their first week of quitting smoking in hopes of increasing their chances of staying quit. Other trials at MUSC are assessing the use of TMS for chronic pain and opiate use.

The Denver Post asks: How did postponing medical care affect you?