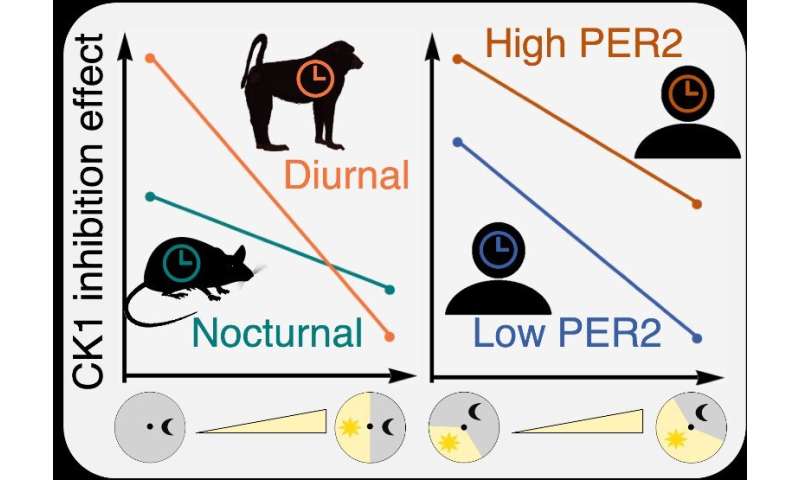 A new mathematical modeling approach has identified major sources of interspecies and inter-individual variations in the clinical efficacy of a clock-modulating drug: photosensitivity and PER2 level. This has enabled precision medicine for circadian disruption.

A KAIST mathematics research team led by Professor Jae Kyoung Kim, in collaboration with Pfizer, applied a combination of mathematical modeling and simulation tools for circadian rhythms sleep disorders (CRSDs) to analyze animal data generated by Pfizer. This study was reported in Molecular Systems Biology as the cover article on July 8.

Pharmaceutical companies have conducted extensive studies on animals to determine the candidacy of this new medication. However, the results of animal testing do not always translate to the same effects in human trials. Furthermore, even between humans, efficacy differs across individuals depending on an individual’s genetic and environmental factors, which require different treatment strategies.

To overcome these obstacles, KAIST mathematicians and their collaborators developed adaptive chronotherapeutics to identify precise dosing regimens that could restore normal circadian phase under different conditions.

A circadian rhythm is a 24-hour cycle in the physiological processes of living creatures, including humans. A biological clock in the hypothalamic suprachiasmatic nucleus in the human brain sets the time for various human behaviors such as sleep.

A disruption of the endogenous timekeeping system caused by changes in one’s life pattern leads to advanced or delayed sleep-wake cycle phase and a desynchronization between sleep-wake rhythms, resulting in CRSDs. To restore the normal timing of sleep, timing of the circadian clock could be adjusted pharmacologically.

Pfizer identified the substance PF-670462, which can adjust the timing of circadian clock by inhibiting the core clock kinase of the circadian clock (CK1d/e). However, the efficacy of PF-670462 significantly differs between nocturnal mice and diurnal monkeys, whose sleeping times are opposite.

The research team discovered the source of such interspecies variations in drug response by performing thousands of virtual experiments using a mathematical model, which describes biochemical interactions among clock molecules and PF-670462. The result suggests that the effect of PF-670462 is reduced by light exposure in diurnal primates more than in nocturnal mice. This indicates that the strong counteracting effect of light must be considered in order to effectively regulate the circadian clock of diurnal humans using PF-670462.

Furthermore, the team also found the source of inter-patients variations in drug efficacy using virtual patients whose circadian clocks were disrupted due to various mutations. The degree of perturbation in the endogenous level of the core clock molecule PER2 affects the efficacy.

This explains why the clinical outcomes of clock-modulating drugs are highly variable and certain subtypes are unresponsive to treatment. This points out the limitations of current treatment strategies tailored to only the patient’s sleep and wake time but not to the molecular cause of sleep disorders.

Ph.D. candidate Dae Wook Kim, who is the first author, said that this motivates the team to develop an adaptive chronotherapy, which identifies a personalized optimal dosing time of day by tracking the sleep-wake up time of patients via a wearable device and allows for a precision medicine approach for CRSDs.