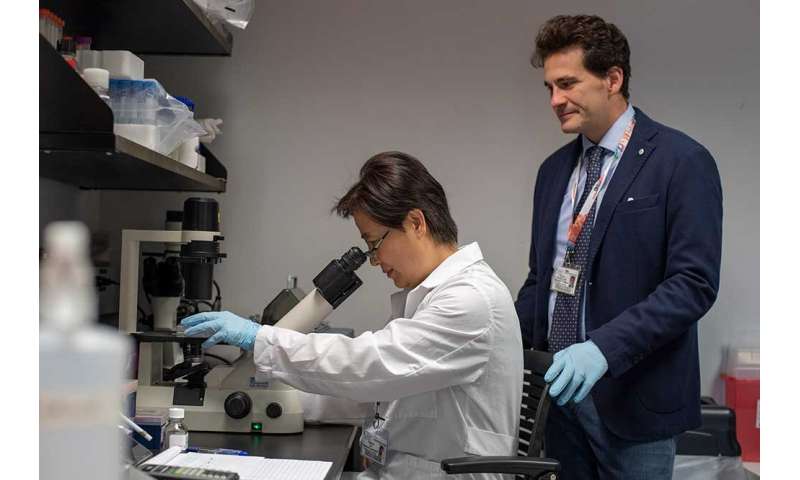 Tumor volume in a preclinical model of triple negative breast cancer (TNBC) was reduced four times more when an experimental polo-like kinase 1 (PLK1) inhibitor was combined with a standard-of-care chemotherapeutic agent than when the agent was used alone. Hollings Cancer Center scientists at the Medical University of South Carolina reported these findings in PLOS ONE.

TNBC disproportionately affects African American and Hispanic women under the age of 50. It is an aggressive form of breast cancer that lacks the three receptors—estrogen, progesterone and human epidermal growth factor receptor 2—that many existing breast cancer treatments target. For that reason, patients with TNBC do not respond well to these therapies.

Standard-of-care treatment for these patients has traditionally included surgery, chemotherapy and radiation, individually or in combination. Recently, immunotherapy has been shown to improve survival in eligible patients with breast cancer. However, only about 40% of patients with stage 4 TNBC qualify for immunotherapy.

In hopes of one day helping the remaining 60%, Hollings cancer researcher Antonio Giordano, M.D., Ph.D., and his team studied whether a combination of a PLK1 inhibitor and a standard-of-care chemotherapeutic drug would be more effective against TNBC than the drug alone. The team included Yueying Liu, who carried out most of the laboratory experiments, and Stephen P. Ethier, Ph.D., director of the Center for Genomic Medicine at MUSC, who conceptualized and supervised this work. Their work was funded by the National Institutes of Health.

They thought the PLK1 inhibitors would interfere with cancer cells’ ability to divide without check, enabling a chemotherapeutic drug to kill them.

“The PLK1 inhibitors are like traffic light signals that stop the uncontrolled growth of the breast cancer cells, allowing the taxanes to actually catch up with the cancer cells and kill them,” explained Giordano. “That’s why we thought that combining a drug that blocks PLK1 with a standard chemotherapy drug like a taxane would work well together to kill the cancer cells that have lost total control of division.”

The MUSC team studied how PLK1 inhibitors and taxanes, alone and in combination, affected TNBC cell lines known to be resistant to chemotherapy. They found that the combination of a PLK1 inhibitor and a taxane makes the TNBC cells more vulnerable to chemotherapy. It also reduces the number of cancer stem cells, which are associated with metastasis.

“With promising results from the cell line experiments, we decided to try only the combination of the PLK1 inhibitor onvansertib and paclitaxel on animals,” explained Giordano. “Onvansertib is already in clinical trial for other diseases as a single agent and has shown a good toxicity profile. Paclitaxel, given weekly, has a much better toxicity profile than docetaxel, with fewer side effects.”

In mice, the combination of onvansertib and paclitaxel reduced TNBC tumor volume more than four times as much as paclitaxel alone after 21 days of treatment. And it achieved the impressive reduction despite using much less of each individual drug than when it was given alone. Lower doses reduce the likelihood of toxic side effects, making the combination regimen more attractive as a potential therapy for patients with TNBC.

These promising results have prompted the researchers to plan a phase 1 clinical trial. They hope to begin recruiting patients for the trial sometime in 2020.