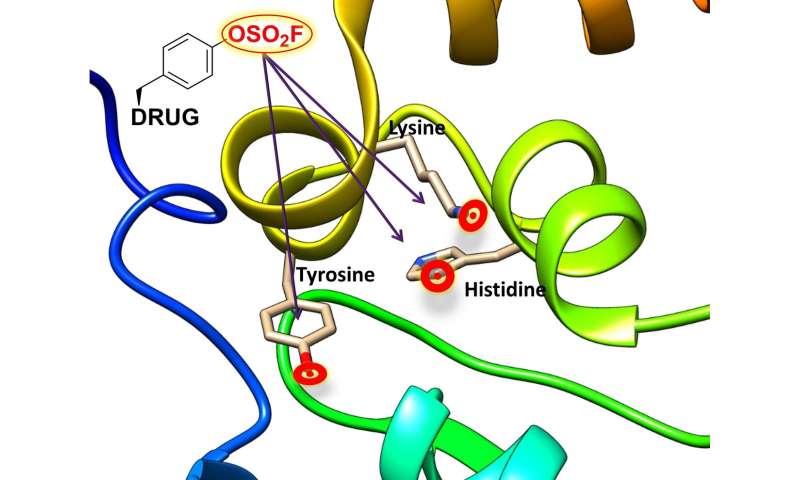 A University of California, Riverside, research team has come up with a new approach to targeting cancer cells that circumvents a challenge faced by currently available cancer drugs.

A cancer target is often a rogue protein that signals cancer cells to proliferate uncontrollably and invade organs. Modern cancer drugs have emerged that work by striking a tight bond between the drug and a particular amino acid called cysteine, one of the 20 natural amino acids that constitute our proteins. Cysteine is unique in that it can react with specific organic functional groups to form a strong molecular bond.

Only a few new cancer drugs that target cysteine have been recently approved by the Food and Drug Administration, or FDA.  A challenge cancer researchers face is that cysteine is rarely found within binding sites of cancer targets, limiting the application of this approach to only a few drug targets.

The UC Riverside research team has now met this challenge by exploring the development of drugs that target other potentially reactive amino acids, such as lysine, tyrosine, or histidine, which occur more often within the binding site of the target.

The researchers also addressed another challenge: The target they used for proof of concept was a protein-protein interaction, or PPI, target. PPIs represent a large class of possible therapeutic targets for which designing effective drugs is particularly difficult. This is because PPIs lack a well-defined and deep-binding pocket onto which drugs can de designed to bind tightly.

“To date, there is only one drug approved by the FDA that was designed to antagonize—or block—a PPI target,” said Maurizio Pellecchia, a professor of biomedical sciences in the School of Medicine, who led the research. “Only a few others have entered clinical trials. Our approach provides novel and effective avenues to derive potent and selective PPI antagonists by designing drugs that can react with lysine, tyrosine, or histidine residues that are ubiquitously present at binding interfaces of PPIs.”

Study results appear in the Journal of Medicinal Chemistry.

Pellecchia, who holds the Daniel Hays Chair in Cancer Research at UCR, explained that academic researchers, the biotechnology industry, and pharmaceutical companies are heavily pursuing the design of “covalent drugs” that bind irreversibly with their targets. Those that target cancer cells most often target cysteine because it is more reactive than all other amino acids in a protein target. Oncology drugs such as Osimertinib, Ibrutinib, Neratinib, and Afatinib have all been approved in very recent years by the FDA, he said, and all target a cysteine that is present on the binding site of their respective targets.