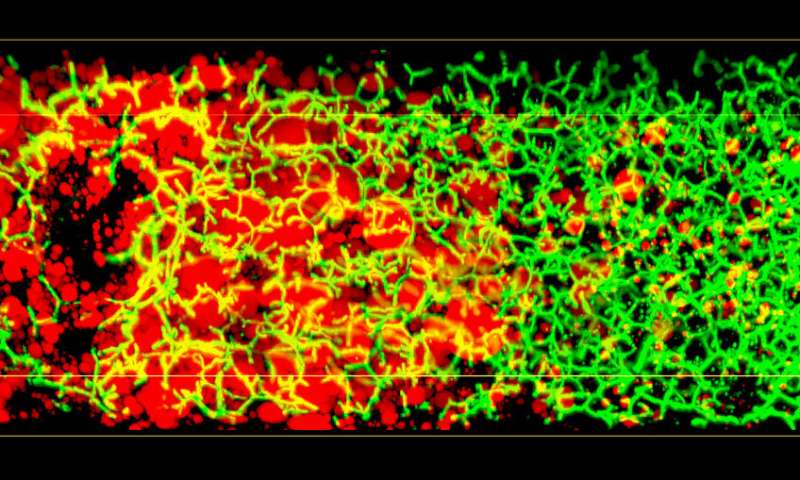 Non-alcoholic fatty liver disease is becoming the most common chronic liver disorder in developed countries. Histological analysis of liver tissue is the only widely accepted test for diagnosing and distinguishing different stages of the disease. However, this technique provides only two-dimensional images of the liver tissue in low resolution and overlooks potentially important 3-D structural changes. Researchers at the Max Planck Institute of Molecular Cell Biology and Genetics in Dresdenand the University Hospital Carl Gustav Carus Dresden together with colleagues from the Technische Universität Dresden now generated 3-D geometrical and functional models of human liver tissue for different disease stages. They reveal new critical tissue alterations, providing new insights into pathophysiology and contributing to high definition medical diagnosis.

Non-alcoholic fatty liver disease is characterized by the accumulation of fat in the liver with an insulin resistance due to causes other than alcohol intake. It includes a spectrum of liver diseases from simple steatosis (“non-progressive” and reversible) to non-alcoholic steatohepatitis, which can progress into cirrhosis, liver cancer, or liver failure, requiring eventually transplantation. In 2017, an estimated 24 percent of the worldwide population was affected by the disease, which makes it the leading cause of chronic liver disease.

Conventional histological analysis of liver tissue is the gold standard for diagnosing disease progression, but it has several disadvantages: The low resolution 2-D images of liver tissue only allow a semi-quantitative evaluation and it can be subjective, since it depends on the pathologist’s skills. Most importantly, it fails to provide 3-D information on tissue structure and function, as the liver has a complex 3-D tissue organization: It consists of functional units, the liver lobuli, containing two intertwined networks, the sinusoids for blood flow and the bile canaliculi for bile secretion and flux. Such an architecture makes it difficult to grasp the 3-D organization and overall tissue structure from 2-D histological images.

In order to overcome those limitations in diagnosis, the research team of Max Planck director Marino Zerial together with colleagues from the University hospitals in Dresden, Rostock and Kiel, and from the Center for Information Services and High Performance Computing at the Technical University Dresden developed 3-D spatially resolved geometrical and functional models of human liver tissue at different stages of non-alcoholic fatty liver disease.

In 2017, the research group of Marino Zerial developed a model of the bile canalicular network and bile flow in the mouse liver using multi-resolution 3-D analysis of its geometry. Now, the team examined the 3-D organization of human liver tissue. Although several defects can already be seen in 2-D images, the alterations of bile canaliculi and sinusoidal networks can only be recognized upon a 3-D reconstruction. Fabián Segovia-Miranda, the first author of the study reports: “Recent advances in making tissue transparent and multi-photon microscopy allow for the imaging of thicker tissue sections, so that 3-D information can be captured.” The 3-D digital reconstruction of those tissues was then used to computationally simulate bile fluid dynamics through a model created by the Center for Information Services and High Performance Computing.

Lutz Brusch from the Center for Information Services and High Performance Computing explains: “While the fluid dynamics of blood flow through the comparatively large capillaries has been addressed by simulations, this was so far impossible for bile due to the lack of accurate geometrical data of human tissue across all relevant scales.” With microscopy, digital image reconstruction and computational modeling combined, the researchers identified a set of cellular and tissue parameters connected with disease progression. Fabián adds: “We discovered that the structure of the 3-D bile canaliculi network is profoundly different in affected tissue. Such structural changes have also critical functional consequences. Using personalized biliary fluid dynamic simulations, we learned that the flow of bile in some small areas of the tissue is compromised, which is called micro-cholestasis.”