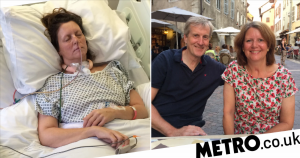 Trudi Kemp was enjoying a chat with a colleague at a work Christmas party, a glass of wine in one hand and a plate of nibbles in the other.

But within a few minutes, she had collapsed on the floor and was fighting for her life.

At the time, Trudi, from Wimbledon, south west London, was working as executive director at Kings College Hospital and she had been enjoying a colleague’s leaving party right at the start of the festive season on 3 December 2015.

Until that moment she had been feeling fine but a vessel in her brain burst causing a sudden aneurysm – and it was only thanks to her quick thinking medical colleagues who were at the party with her that she survived.

Trudi, now 56, explains: ‘I can remember being at the party. I was chatting to lots of clinical and managerial people.

‘I am told (but I do not remember) that I gave my glass of wine to someone else.

‘This is the point at which anyone who knew me well would have known that something was wrong. I am told I wobbled over to the host, said I felt unwell and collapsed at his feet and then had a seizure.

‘An astute neurosurgeon remarked that he thought there was something “going on” inside my head and that I ought to be taken to the CT scanner in the emergency department about 50m away.

‘Luckily, I was on the hospital premises when it happened, surrounded by clinical people who knew exactly what to do.’

The scan showed Trudi had a large subarachnoid haemorrhage, caused by a bleed on the brain. During her recovery, doctors told her they believed it was caused by high blood pressure – something she didn’t know she had.

Completely unconscious, Trudi was moved to intensive care and the colleagues who had saved her called her husband Sam, who was driving home from work. He rushed to Kings with their 17-year-old son so they could be by her side.

The following morning, her aneurysm was coiled, meaning a thin tube was inserted through the groin and pushed through the body until it reaches the head. Tiny coils are then passed through the tube into the aneurysm until it is full of coils and blood cannot enter it.

Trudi adds: ‘I had the operation my husband and eldest son waited in my office at King’s. I was still unconscious and went back to the intensive care unit ventilated.’

She had a PEG tube inserted into her stomach and a tracheostomy fitted to allow her to eat and breathe.

She says: ‘I have no memory at all of my time in intensive care. Lots of people visited and talked, read, sang and played music, but I stubbornly stayed unconscious.

‘In February 2016, I was transferred to St George’s as it was much much closer to home.

‘At St George’s a VP shunt was inserted to drain fluid from my brain into my abdomen, which is there today. About three days after the shunt was put in I started to wake up.’

Although she was now awake, Trudi was still very unwell because of the brain injury she had suffered and she was transferred to the Royal Hospital for Neuro-disability in Putney for rehabilitation in March 2016.

She adds: ‘My first memory since my haemorrhage was in the ambulance being transferred from St George’s to the RHN.

‘I can remember arriving there and being assessed and then transferred to a ward.  On arrival there I was still in reduced consciousness but I didn’t know that.

‘I then had to learn how to do absolutely everything again: walking, talking, dressing, washing, eating.

‘During the week there was rehab at the RHN every day, and there was physiotherapy, occupational therapy, speech therapy, psychology, music therapy and art therapy. I was kept very busy indeed.

‘Visits by family and friends were vital and kept me sane.

‘I am very clear that my family had a much worse time of all this than I did – they spent a lot of time not knowing if I would ever wake up and if I did what kind of a mess I would be in.’

During her time in rehab, in July 2016, her husband, sons Sam and Theo, and a group of friends did the RideLondon 100 bike ride. They raised £22,000 for the RHN between them. Trudi was taken by a couple of good friends from the hospital to Green Park to see them all at the end of the ride.

Six months after arriving in a state of reduced consciousness, Trudi managed to walk out.

She explains: ‘Given where I had been, that was, and is, amazing!’

‘I had to retire from my job at King’s. I now receive an ill-health pension from the NHS. Having worked full time for 30 years, I found not working very hard indeed.’

Trudi started volunteering at RNH, the rehab hospital that had helped her and when a job for a part-time receptionist came up, she decided to go for it and she started the position in August 2018.

She now works on the front desk and still volunteers one afternoon a week at the hospital.

She adds: ‘To all intents and purposes I lead a normal life. I don’t move as well as I used to. I swim a lot, walk a lot and have picked up my clarinet after 40 years under a bed.

‘I have no substantial disability, but if you were a neurologist and looking for it, you would find very mild weakness and less coordination on my left side, but it is not anything that interferes with daily life.

‘I am no longer driving and not cycling (which I did a lot) and don’t think skiing would work any more. Given where I could have been, that’s a manageable set of disabilities.’

Do you have a powerful story to share? Get in touch and tell us all about it at [email protected]