The woman who is slowly ‘turning to STONE’: Wheelchair-bound 23-year-old’s condition causes muscle and tissue to gradually change into bone

A woman suffers from a rare condition dubbed ‘Stone Man Syndrome’ that causes muscle and tissue to change into bone.

Carli Henrotay, 23, from Saint Louis, Missouri, is one of 800 people known to have fibrodysplasia ossificans progressiva (FOP).

The crippling condition, which is currently incurable, gets progressively worse over time and patients have a life expectancy of around 40.

Miss Henrotay’s mobility is severely restricted – she can’t raise her arms above her head, bend at the waist or stand on two legs due to her joints being locked.

Her back is ‘a sheet of bone’, she has to use a wheelchair to get around while her jaw only opens a few millimetres.

She is also extremely fragile, as patients with FOP live in fear knowing minor injuries can trigger the acceleration of bone growth.

At the age of five, doctors diagnosed the condition by chance when they noticed she had big toes shorter than her other toes – a tell-tale sign. 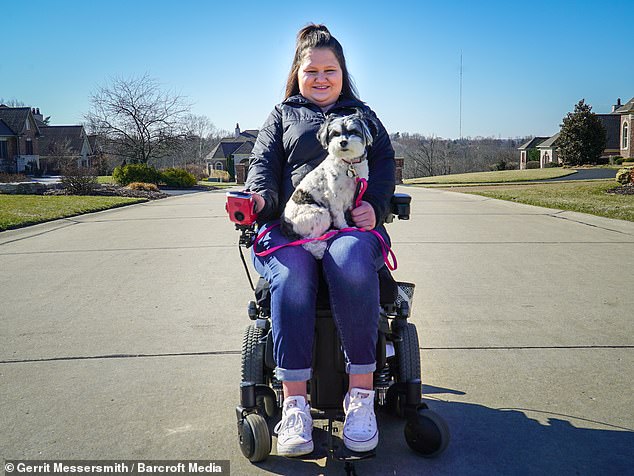 Carli Henrotay, 23, is one of 800 known people to have Fibrodysplasia Ossificans Progressiva (FOP), also known as ‘Stone Man Syndrome’. With her mobility severely affected, she needs to use a wheelchair to get around. Pictured with her dog in March 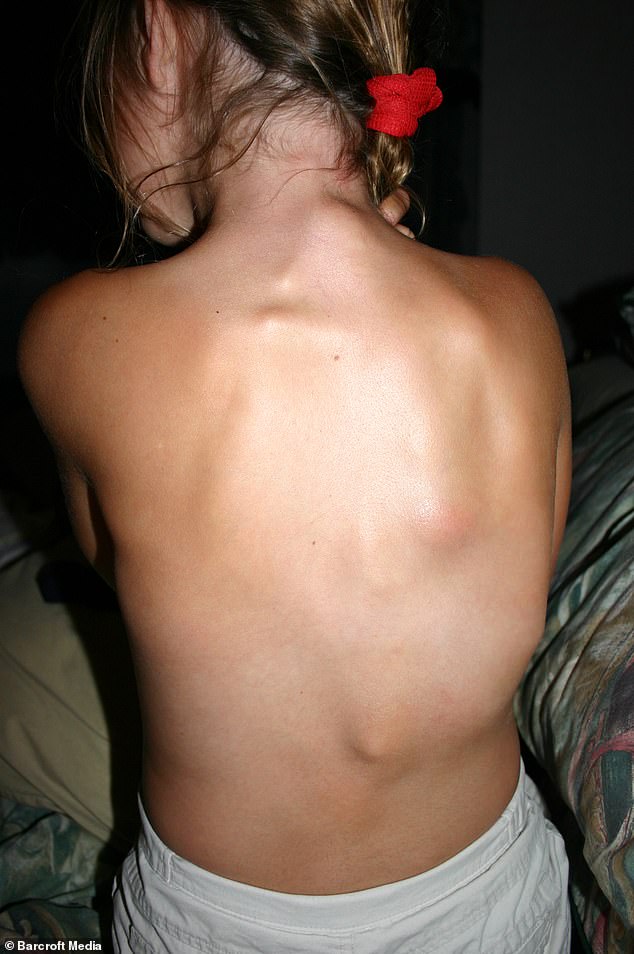 The condition causes muscle and connective tissue to slowly change into bone, in effect growing a second skeleton. Pictured, a close-up of Carli Henrotay’s back in 2005 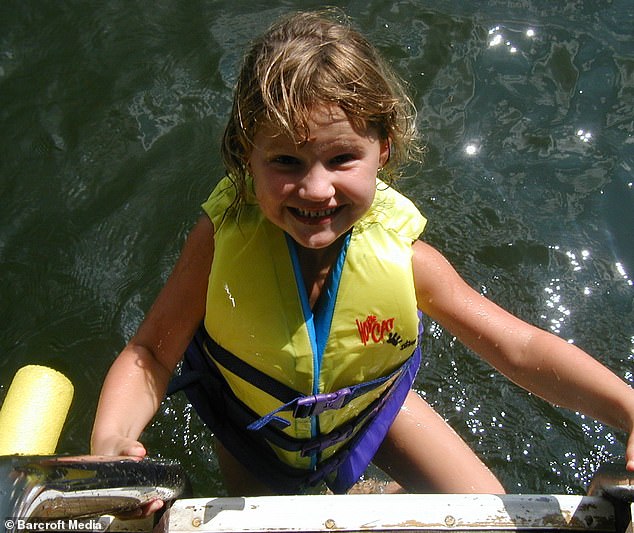 At the age of five (pictured), doctors diagnosed the condition by chance when they noticed she had big toes shorter than her other toes – a tell-tale sign

Miss Henrotay said: ‘FOP is a one-in-two million disease, although there is evidence that it looks a little more than that.

‘FOP mostly affects me in a couple of different places; my jaw is locked and I have less than 2mm of opening so it makes it harder for me to eat or talk and project my voice.

It causes bone to form in muscles, tendons, ligaments and other connective tissues.

Ridges of extra bone develop across joints, progressively restricting movement and forming a second skeleton that imprisons the body in bone.

It was only in 2006 that researchers discovered FOP is caused by a mutation in the ACVR1 gene, which controls the body’s growth and development of bones and muscles.

Naturally, cartilage is replaced by bone from birth to adolescence. But scientists say that the mutation may leave gene receptors constantly ‘on’, which causes bones to overgrow and joints to fuse together.

Those with the disorder usually experience their first ‘flare-up’ by age 10. Children with FOP start growing extra bones in their neck and shoulders, proceeding through the body down to the feet.

According to the National Center for Advancing Transnational Sciences, the disorder occurs in roughly one in 1.6 million newborns.

There are only about 800 people in the world known to have the condition.

Currently, there is no cure and treatment consists of medications that reduce inflammation and relax the muscles.

Most FOP sufferers are bedridden by the age of 20 and die around age 40.

FOP can eventually result in death when the cartilage holding the ribs together also solidifies, making it impossible to breathe.

Patients may eventually suffocate or suffer a cardiac arrest as their bodies attempt to get enough oxygen.

‘My shoulders and neck are also locked, which hinder me from doing my hair or driving. And my hip is also locked which is why I walk with a limp or use other mobility aids just because I can’t walk that long a distance.’

Miss Henrotay added: ‘The first thing to go was my back. Over time it has turned into a sheet of bone.

‘FOP causes a lot of pain. I never know how to answer the question “on a scale of one to ten what is your pain?” because I live every day and every moment in pain. I am lucky that I have such a high pain tolerance.’

FOP is a rare, genetic disorder in which damaged muscles and soft tissues – such as ligaments and tendons – regrow as bone.

Before her diagnosis, Miss Henrotay was an active child. She loved to swim, run outside and play soccer.

All of that changed when doctors told Miss Henrotay’s parents their daughter had a rare and progressive disease.

Miss Henrotay, who is an A-grade student, was five and a half when she was diagnosed – but only by chance.

The disease can be made worse when the person injures themselves as it triggers a flare up of swelling and faster bone development.

It’s the reason operations to remove pieces of bone are not possible, because it would only cause more bone formation.

According to Miss Henrotay, anything as small as a papercut can cause progression of the disease.

Miss Henrotay said: ‘We went to the doctor and he didn’t really know what the swelling was so he ordered a biopsy.’

But before the biopsy results, Miss Henrotay’s mother Lori took her to their regular physician Dr Martin Schmidt. 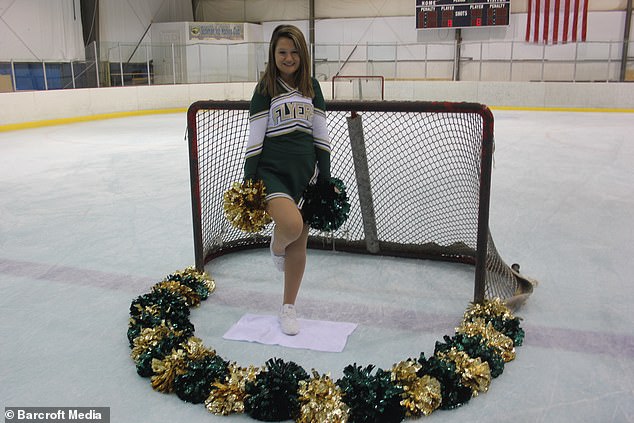 Before her diagnosis, Miss Henrotay was an active child which she tried to keep up throughout school. Pictured, cheerleading in 2013. She adopted a flamingo-esque pose to help with balance as her locked hip leaves her slightly bent forward when two feet are on the floor 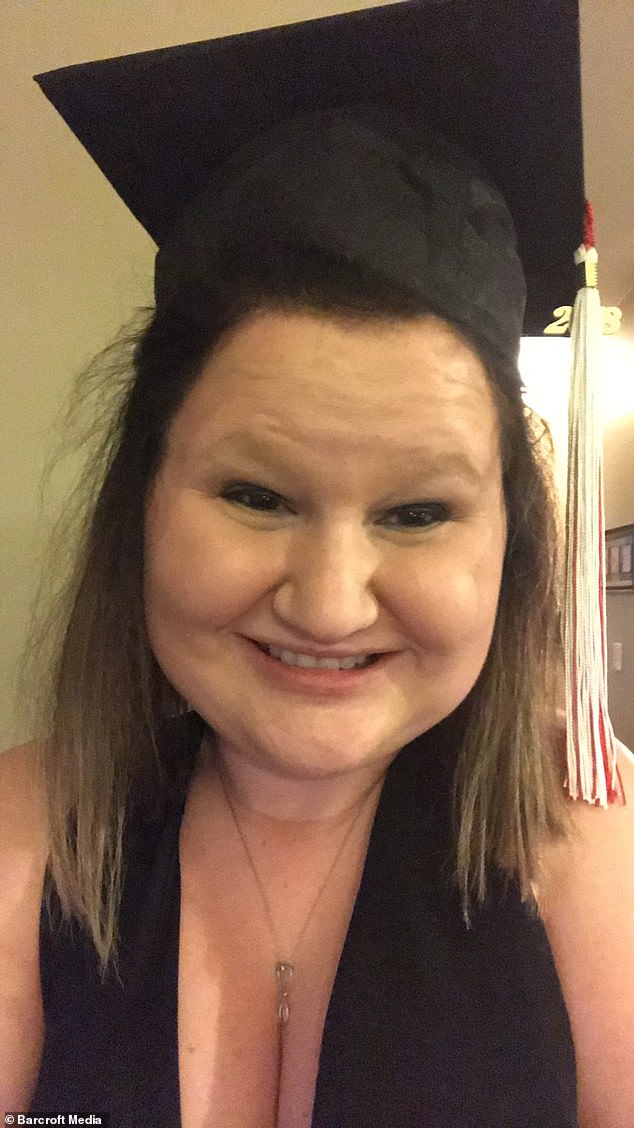 Although Miss Henrotay needs help to do most things but she is determined to be as independent as possible. She graduated college in 2018 (pictured) 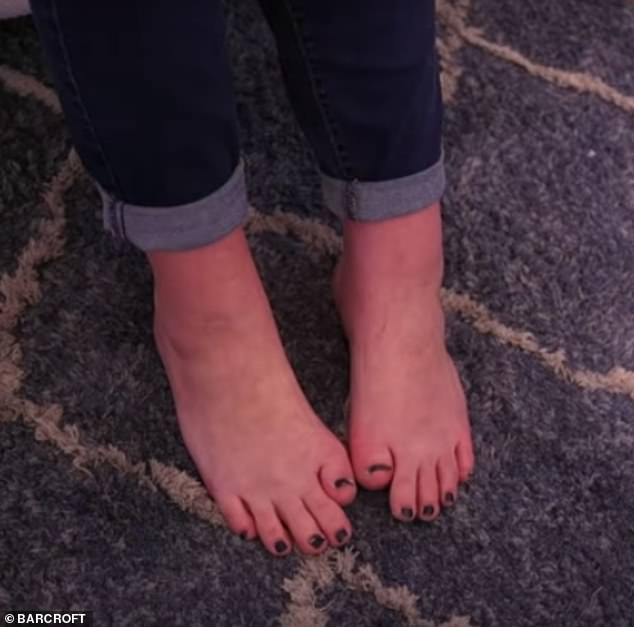 Miss Henrotay’s big toes are shorter than her other toes (pictured), a hallmark symptom of FOP caused by a missing bone which led to her diagnosis

He had come across another patient with FOP two years previously and recognised the symptoms.

Miss Henrotay said: ‘He looked at the swelling and immediately knew that he had to take my socks of and look at my big toes.’

Miss Henrotay’s big toes are shorter than her other toes, a hallmark symptom of FOP caused by a missing bone.

She said: ‘I was diagnosed with FOP at five-and-a-half so I was lucky enough that I got that normal childhood.

‘But at the same time I don’t remember life without FOP so I have all the memories of the normal childhood but without remembering what it was like to function like that.

‘Had I been diagnosed probably even two years later I would have had more memory living without FOP but I feel very fortunate that I still got that normal childhood, but I am also not resentful of the fact of not living without it.’

Although Miss Henrotay needs help to do everything from brush her hair to put her shoes on, she is determined to be as independent as possible.

She had surgery to remove her back teeth so that she is still able to eat by forking food to the back of her mouth. 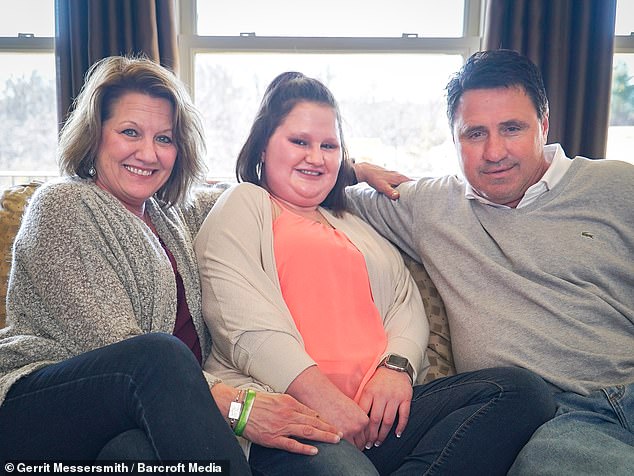 Miss Henrotay’s mother Lori, who is married to Paul, pictured, took Miss Henrotay to their regular physician Dr Martin Schmidt who had by chance diagnosed FOP two weeks before 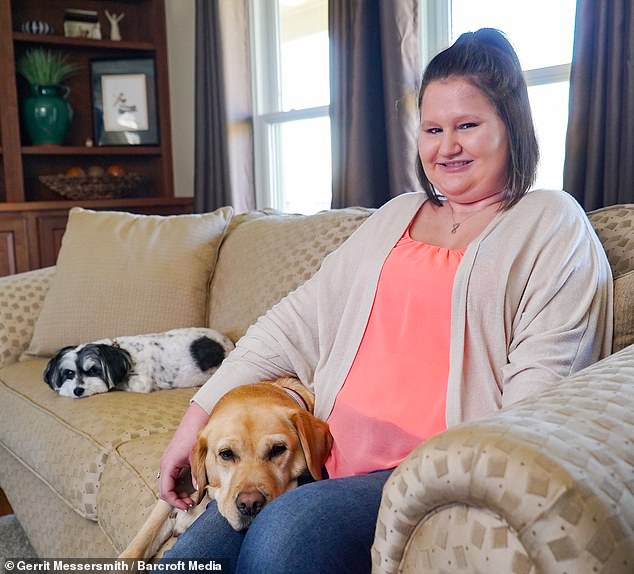 Miss Henrotay, pictured at home with her dogs, said: ‘My shoulders and neck are also locked, which hinder me from doing my hair or driving. And my hip is also locked which is why I walk with a limp or use other mobility aids just because I can’t walk that long a distance’ 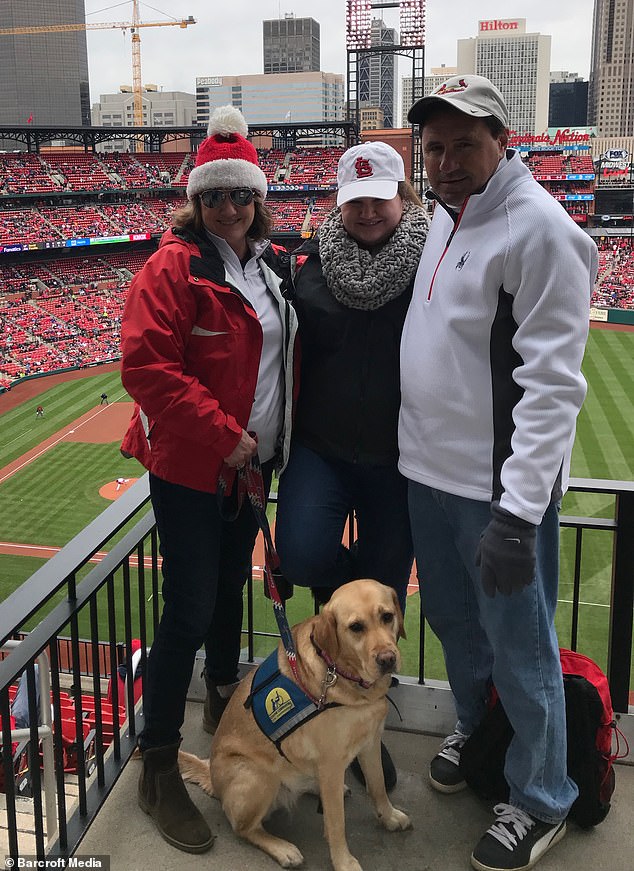 The condition is so painful that Miss Henrotay said she is unable to rate it out of ten. Pictured with her family at a baseball match in 2018 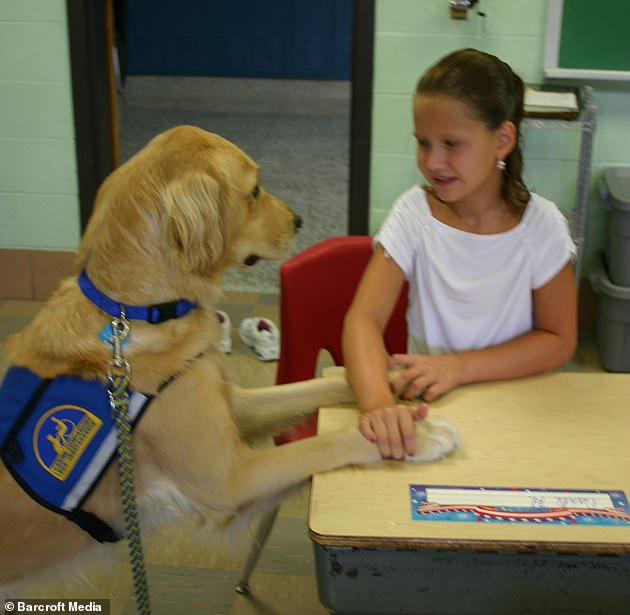 Miss Henrotay, pictured with her dog at school, said she had a normal childhood but can’t remember life before she had FOP. It is not clear how her dogs assist her

She also adopted a flamingo-esque pose when standing because her posture is straighter than when both feet are on the group because her locked hips cause her to slight bend forward.

The pose allows her to speak with people without craning her neck and she said she feels more balanced.

After the diagnosis, rather than wrap Miss Henrotay up in bubble wrap, Lori and husband Pete encouraged their daughter to live as active a life as possible.

Miss Henrotay said: ‘Instead of playing soccer with a league maybe I could kick the ball to the side gently. We always were very good about educating my class and my friends.

‘Even though I was different I was just like them so I was always treated special, so like in gym class if they were running the mile, I would get to pull a friend aside and we would jump rope together.’

Miss Henrotay tried to see herself as special rather than incapable, which has allowed her to maintain a positive attitude.

The college graduate said: ‘When I was seven my jaw locked, which was scariest for my parents. 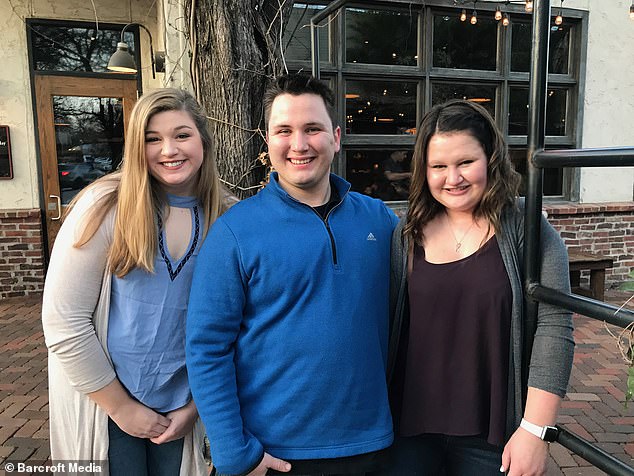 Miss Henrotay remains positive and said: ‘I definitely get sad at what FOP has taken from my life but it is not something that I try to dwell on’. Pictured with her boyfriend, Billy Schmitt Jr, and friend Lynn Fei 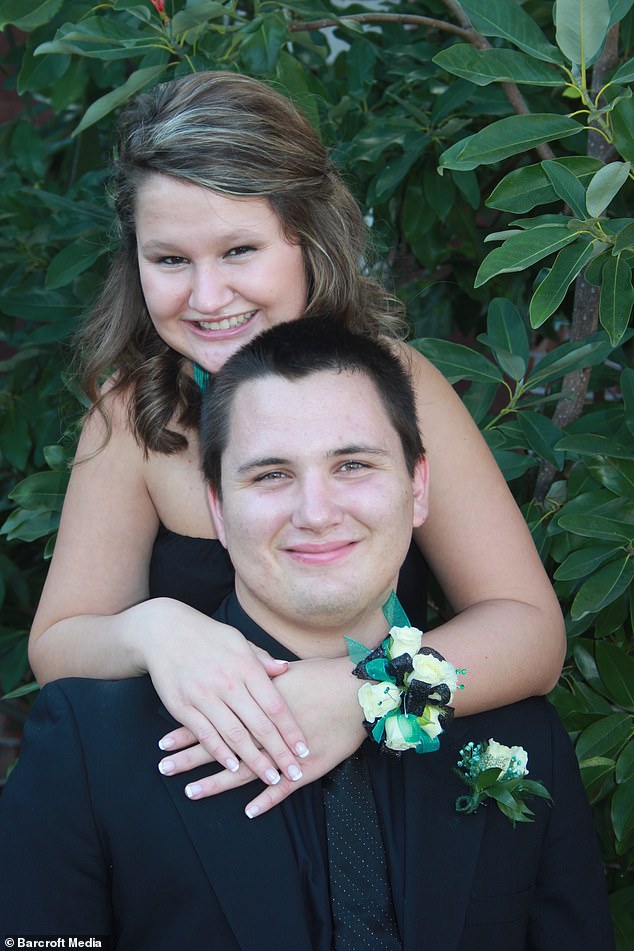 Recently Miss Henrotay moved in with her boyfriend of six years, Billy Schmitt Jr, who she met in middle school. She tries to live independently but needs help with basic things such as brushing her hair or putting her shoes on

‘I immediately adapted and didn’t really think of it otherwise but I know my parents had freaked out because that isn’t something that normally goes so young.

‘It is definitely disappointing that I can’t play sports or drive a car or do this, that or the other thing but I always try to look on the positive side and remember what I still have and I am thankful for that.’

And recently Miss Henrotay moved in with her boyfriend of six years, Billy Schmitt Jr, who she met in middle school.

She said: ‘I am excited to get in my new home and see where my independence can take me but it also is a double-edged sword because I know it will hinder me as well.

‘I want people to understand that disability isn’t the whole part of me even though you can see it. You need to see more than the wheel chair and just see me as a person before you judge me for the disability.’