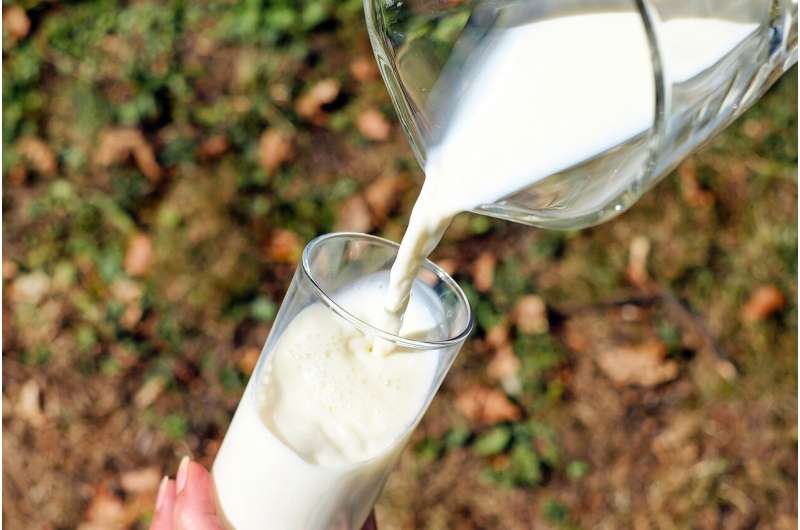 Around one-third of the food produced globally every year never gets eaten. This waste often occurs along the supply chain before the food even reaches us. But consumers who throw away food because it’s gone bad, or because they think it may have gone bad, are also responsible for a large proportion of food waste.

All food production results in greenhouse gas emissions. So wasting food is not only bad for your pocket—it’s also bad for the environment.

Recently, Morrisons supermarket announced that it will move from putting “use by” to “best before” dates on milk. It says this could save seven million pints of its own-brand milk from being wasted each year.

According to British charity WRAP, milk is the third most wasted food item in the home (after potatoes and bread) with more than 490 million pints thrown away in the UK annually. So changing the advice to encourage people to keep their milk for longer is likely to be good for the planet. But is this move safe for consumers? The short answer is yes.

First, let’s look at the terms “use by” and “best before”, which have long confused consumers.

“Use by” is the date until which the manufacturers know the product will remain safe. This is based on scientific analysis which has determined how long a product can be stored before there’s a risk that any dangerous microbes could reach levels that will cause harm. You’ll see use-by dates on foods that can pose a danger if they’re stored too long, such as cooked meats and dairy products.

“Best before” relates to the quality of the product. This date tells you how long you can keep something before the product starts to taste less fresh, or decline in quality (for example, how long you can store bread before it gets a bit stale). But this doesn’t mean the product isn’t safe to eat after this date. You’re likely to see best-before dates on preserved products, such as tinned or frozen foods, which you can safely keep for a long time.

You might think milk should sit firmly in the “use by” category—it is a dairy product after all. But actually, shifting to a best-before date is safe for consumers, thanks to a process called pasteurization. During pasteurization, the milk is heated for a short time to a high temperature. This kills bacteria which can be present in raw milk and cause infections in humans (often called “pathogens”).

Although the pathogens are killed in this process, some non-harmful microbes remain in pasteurized milk. So milk is stored at a low temperature (in the fridge) to slow the growth of these remaining microbes. Nonetheless, they will still grow, and it’s the growth of these non-harmful bacteria that cause the milk to spoil. As the microbes grow they produce enzymes to help them break down the milk, which causes the milk to curdle and produces the “off” smell we associate with spoiled milk.

Notably, for pasteurized milk (and we need to be very clear that this ONLY applies to pasteurized milk) even when the milk starts to go off, there’s no evidence the microbes growing in the milk will cause you any serious harm. If you drink a significant amount of spoiled milk, you might find yourself with an upset stomach but there’s nothing to suggest spoiled milk causes infections or severe illness.

The best-before date is the manufacturers’ best estimate of how long the milk should last in the fridge before you can detect any spoilage, either by smell, taste or both. Every batch of pasteurized milk is different and will have more or less of these non-harmful bacteria remaining in it, so in reality the best-before date is an estimate of when the milk with the most bacteria left in it will spoil. But many batches of milk will be fine for much longer than this—hence Morrisons’ change in advice.

If you’ve lost your sense of smell, or don’t fancy sniffing the milk, simply pour some into a cup of boiling water as if you were making a cup of tea. If it curdles then it’s started to turn; if it mixes in normally it’s fine to use.

Should you throw milk away if its started to spoil? If you’re just using it for drinking, it’s probably not going to taste too good. But milk that’s starting to turn can be safely used as a substitute for buttermilk, yogurt or sour cream in recipes like rice pudding, pancakes and scones, or can be used to make cheese sauces.

Clearly if the milk has really spoiled (if it’s fully separated, cheesy and slimy), it should be thrown away.

Once again, this advice applies only to pasteurized milk. Raw milk can still contain pathogens and should never be consumed beyond the use-by date.

Also, because different foods naturally contain different types of microbes, this advice cannot be generalized. In other kinds of foods pathogens can reach dangerous levels without any real detectable evidence of spoilage. So generally, the advice is to stick to the use-by date.