Why there’s an uptick in vaping-related lung illnesses

The news about vaping is reaching a fever pitch.

Last week police in Wisconsin announced arrests in connection with a drug operation that was filling 3,000 to 5,000 illegal THC vaping cartridges a day for nearly two years at concentrations 157 times the labeled THC potency. It’s still unknown if these cartridges have been linked to any illness.

From the Oval Office, President Trump told reporters his administration will take action after a sixth person recently died from a vaping-related lung illness.

“It’s very dangerous, children have died and people have died,” said Trump. “We’re going to have some very strong rules and regulations.” 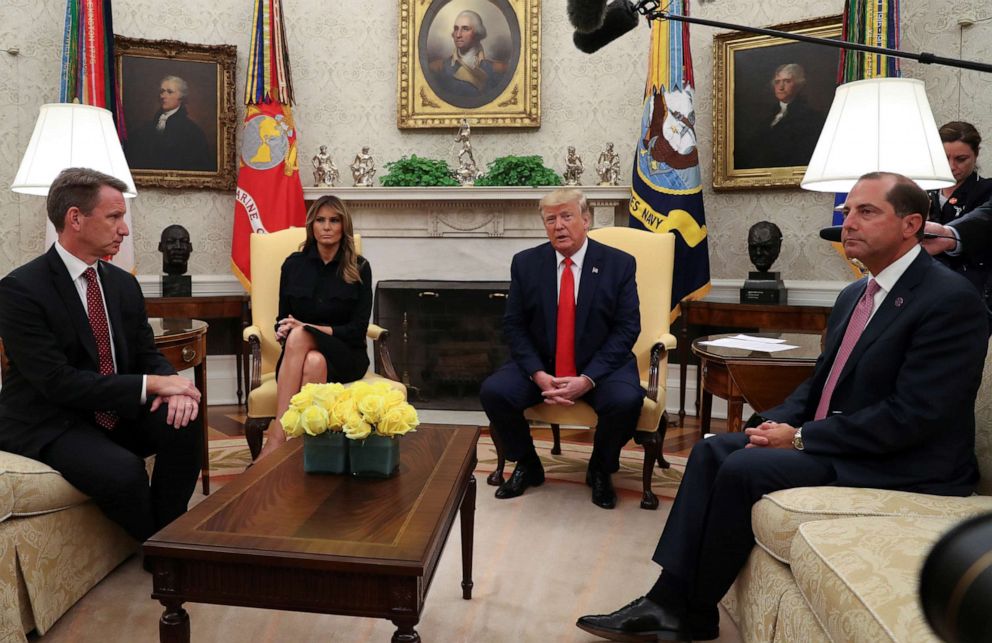 Moments later, Alex Azar, the secretary of Health and Human Services, outlined a plan to ban all flavored e-cigarettes until a formal review could be conducted by the FDA in May 2020. There is currently no long-term data on the health effects of e-cigarettes.

The Centers for Disease Control and Prevention said there are 380 confirmed and probable cases in 36 states of lung illness linked to vaping in just the last couple of months.

All of this attention could lead one to think that lung illness linked to vaping is a brand new problem, but scientists have been researching the possible link for years.

There have been isolated documented cases as far back as 2014, but the largest case series to date of vaping-related lung illnesses published suggests there’s a significant uptick in the number of people getting sick since June.

Surveillance data in the study shows the average monthly rate of severe lung illness seen in young people being admitted to Illinois emergency rooms has doubled compared to last year.

“They clearly showed increased cases in June leading up to the CDC announcement and we have seen an increase in New York too,” said Dr. Daniel Croft, a pulmonologist at the University of Rochester. “We have a concern that there may be some new ingredient or change in composition of the THC oil leading to this problem.”

The FDA has not identified a single source that is causing the illnesses, but there are some leads, including the suspicious chemical vitamin E acetate found in THC-containing samples from New York.

While none of the New York samples were purchased from legal cannabis dispensaries, one vape-associated death in Oregon was connected to a legally-purchased product from a dispensary. The majority of the cases have involved vaping THC, while a smaller minority reported use of nicotine alone.

One compelling hypothesis supported by the available research is that vaping nicotine, flavorings and solvents –while perhaps not the immediate cause for the severe illnesses we are seeing — may prime the lungs for exaggerated lung injury, explained Croft.

“Vaping may increase the susceptibility to worsened inflammation from this THC-containing oil akin to pouring gasoline on a smoldering fire,” he said. Alternatively, the THC oil by itself may be able to cause severe pulmonary inflammation.

“Something about vaporizing THC concentrates seems to be more inflammatory than smoking them,” Dr. Laura Crotty Alexander, an intensive care physician and researcher at the University of California San Diego, told ABC News.

But how might THC oil be causing the damage? What have we learned about the effects of vaporized nicotine and solvents over the years?

ABC News spoke to the doctors who have been on the frontlines of treating patients and researching the potential association to better understand what these lung illnesses are and what may be causing them. 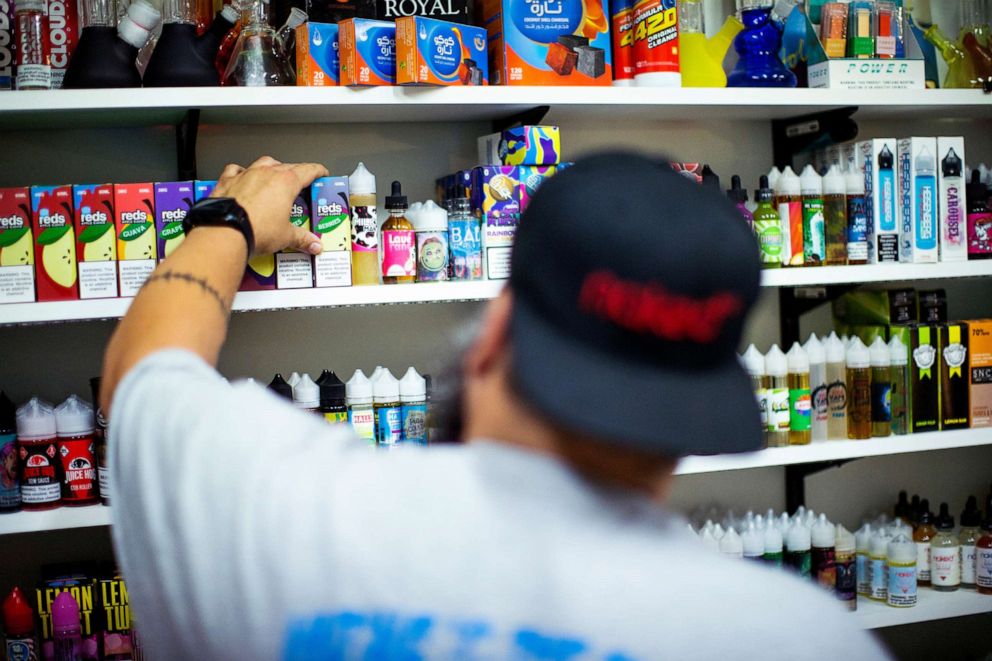 “Lungs don’t like oily liquids,” said Dr. John Parker, a pulmonologist at West Virginia University. Parker saw one of the earliest cases linked to vaping back in 2015 when a 31-year-old woman using e-cigarettes came to the hospital with difficulty breathing. She had what looked like pneumonia, but the tests were negative for infection.

When they sampled the cells in her lungs, they found many immune cells filled with an oily material called “lipid laden macrophages.” That’s when they connected her case to the oily chemicals she was vaping.

When vape liquids with solvents like glycerol and other oily additives heat up and cool down, those droplets can be inhaled and disrupt normal lung function. The lungs respond to the droplets and other aerosolized chemicals like foreign invaders, attacking them with the immune system and causing inflammation.

Her diagnosis — called lipoid pneumonia — is a condition seen most commonly in elderly people who accidentally inhale oils into their lungs. It is not a disease that has ever been linked to smoking cigarettes.

“This young woman had no good reason for getting lipoid pneumonia,” said Parker, “except other than the fact that she was using e-cigarettes leading up to her illness.”

“Lungs can become irritated when exposed to anything besides good old clean air,” said Alexander. A number of chemicals, including nicotine, can set off the inflammation.

When the lungs are irritated, the body’s infection fighting cells start to build up. Normally, they help us fight viruses and bacteria, but when there is no infection to fight, they instead set off inflammatory pathways that injure the healthy lung tissue.

Doctors diagnose these conditions when they find a buildup of certain kinds of immune cells in the lungs, including cells called eosinophils and neutrophils.

Patients need washings of their lungs for definitive diagnosis, which means a camera has to be inserted into the lungs. However, in most of these vaping cases, patients are too sick to withstand the procedure.

Rather than a separate disease, acute respiratory distress syndrome (ARDS) is a term that expresses how bad the lung problem is, or how low a person’s oxygen levels are. Severe inflammation causes fluid to leak into the lungs, damaging their ability to transfer oxygen. In the case series, nearly one-third of patients needed breathing tubes.

The most severe cases required an invasive procedure called “ECMO,” which removes blood low in oxygen and passes it through a device that super-oxygenates the blood before returning it to the body.

Recovery has been an uphill climb for one young man who survived to tell his story after ECMO.

“I just don’t have the stamina that I used to,” the patient, Alexander Mitchell of Utah, said.

Another severe complication on the spectrum of lung injury is bleeding into the lungs. “This happens when the inflammation passes beyond the lung tissue into the lung’s blood vessels,” said Parker.

People with this condition can cough up blood, making it even harder to breath. A case of this disease seen with vaping was published in 2016.

Treatment in these cases is supportive and involves the use of steroids to reduce inflammation. If it persists over longer periods, the inflammation can lead to the development of scars in the lungs, resulting in long-term breathing problems.

“The severity of these lung illnesses does not bode well for what we might see in the future,” said Alexander.

In her laboratory, she has conducted research that shows the solvents used almost universally in vape liquids –propylene glycol and glycerol — may cause damage to other organs like the heart, kidneys and liver when inhaled.

“Everyone is focused on the lungs right now but we might discover later that these chemicals cause disease throughout the body,” she said.

For those still vaping, be on the alert for symptoms like cough, shortness of breath and subjective fever and seek medical care right away if these symptoms develop.

If you’re smoking cigarettes and attempting to quit, ask your doctor about other proven cessation treatments, like nicotine gum, patches and other medications.