Early this month, a respected medical journal published a research paper on its website that analyzed the effects of a business trend roiling the field of dermatology: the rapid entrance of private equity firms into the specialty by buying and running practices around the country.

Eight days later, after an outcry from private equity executives and dermatologists associated with private equity firms, the editor of the publication removed the paper from the site. No reason was given.

Furor over the publication and subsequent removal of the article has deepened a rift in the field over what some see as the “corporatization” of dermatology and other areas of medicine.

[The once sleepy field of dermatology is booming these days. Read our story.]

The paper was published on the website of the Journal of the American Academy of Dermatology on Oct. 5, posted along with numerous other articles labeled “In Press Accepted Manuscript.” Most articles with this designation eventually appear in a print edition of the journal; some remain online.

Dr. Dirk Elston, the journal’s editor, said in an email that he replaced the article with a notice of “temporary removal” after receiving multiple calls and emails “expressing concerns about the accuracy of a few parts” of the article.

On Wednesday, nearly two weeks after removing the article, Dr. Elston told the authors they had a choice: They could correct “factual errors” or retract the paper.

The authors maintain that the article does not contain any factual errors and that several of the corrections requested had to do with protecting the reputation of the specialty and the leaders of the American Academy of Dermatology, the association that publishes the journal. Later on Wednesday, they submitted some revisions.

The article had gone through the standard editorial process of academic journals, undergoing multiple revisions based on feedback from peer-reviewers selected by the journal, before being accepted for publication. It presents data to support a conclusion that private equity firms acquire “outlier” practices — that is, practices that perform an unusually high number of well-reimbursed procedures and bill high amounts to Medicare.

“It was interesting when we ran the numbers and we were counting how many practices with billing outliers were being acquired by private equity,” said Dr. Joseph Francis, a dermatologist in Florida who is a co-author on the paper. “With every revision of the paper, that number kept increasing. So it didn’t seem like an anomaly.”

He added, “It wasn’t clear whether these investors realized that the high billing might point to anything irregular. They might have just seen that this was a practice with booming business.”

The paper also notes that many practices backed by private equity firms have opened or acquired labs to process pathology specimens, potentially another source of profit.

Among those who objected to the article was Dr. George Hruza, the incoming president of the American Academy of Dermatology. Dr. Hruza, whose one-year term as president begins in March, is a dermatologist in Chesterfield, Mo. In 2016 he sold his own dermatology practice to United Skin Specialists, a firm that manages dermatology practices and is backed by private equity. He currently serves on the board of directors of United Skin Specialists, which he said is an unpaid position.

Dr. Hruza is not named in the journal article, but he said he is easily identified by the authors’ reference to his pending presidency of the academy, and to United Skin Specialists.

In an interview, Dr. Hruza said he did not ask that the paper be taken down. He did, however, confirm that he expressed his concerns to Dr. Elston, the editor, after it was posted. Two days later, Dr. Elston removed the paper. A flurry of intense conversations ensued among Dr. Elston; Dr. Hruza; the current academy president, Dr. Suzanne Olbricht; a lawyer for the dermatology academy; and the paper’s authors. 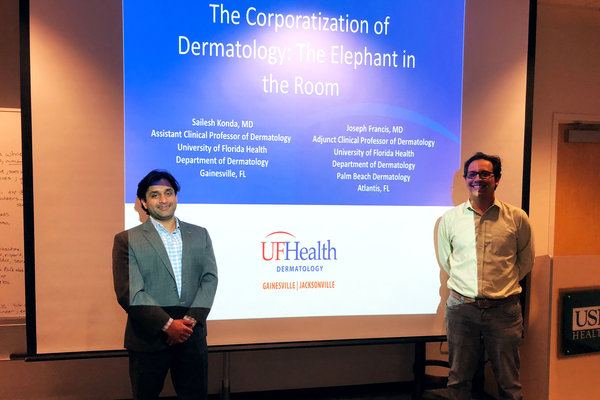 Specifically, Dr. Hruza said, he objected to one of the paper’s conclusions: Influential dermatology leaders are being recruited to work for and promote dermatology practices backed by private-equity firms.

“Implying motivation is a stretch,” he said. Dr. Hruza has asked for specific wording changes to that section of the paper.

Among the changes the editor of the journal asked the authors to make was the removal of identifiable references to influential dermatologists, including Dr. Hruza.

“The process of science requires that people be allowed to publish their data as long as it has been reviewed by peers who find it accurate in that moment,” said Dr. Mitchell Katz, president and chief executive of NYC Health & Hospitals and Deputy Editor of the journal JAMA Internal Medicine.

As for corrections, Dr. Katz added, “usually you would post a correct copy rather than removing a paper for days on end.”

Dr. Elston said others who objected to the article included Dr. Darrell Rigel, a prominent dermatologist in New York who is a former president of the academy and whose practice is now owned by Schweiger Dermatology, a private equity-backed practice. Dr. Rigel did not respond to requests for comment.

Dermatologists account for one percent of physicians in the United States, but 15 percent of recent private equity acquisitions of medical practices have involved dermatology practices. Other specialties that have attracted private equity investment include orthopedics, radiology, cardiology, urgent care, anesthesiology and ophthalmology.

One of the paper’s five supplemental tables lists 32 dermatology practices in the United States that have been formed or acquired by private equity firms. Many are large practices with dozens of physicians.

Shortly after the article disappeared from the journal’s website, a copy was posted to a Facebook group composed of some 3,500 dermatologists. Several participants in the Facebook group praised the article for shining a light on the effects of private equity on their specialty, and were outraged that the article had been withdrawn.

“If this were an article on psoriasis no one would be questioning it, but this was going to ruffle some feathers,” said Dr. Curtis Asbury, a dermatologist in Selbyville, Del., and an active participant in the Facebook group.

The lead author of the paper was Dr. Sailesh Konda, an assistant clinical professor of dermatology at the University of Florida College of Medicine. Dr. Konda, 34, said he first grew interested in the topic when several of his trainees went to work for private equity-backed practices and told him of clinical environments that emphasized profits at the expense of patient care. He said that over the past year he had given 16 talks around the country to medical residents and dermatology societies about private equity. Dr. Francis has joined him for some of the sessions.

Dr. Konda said he and his co-authors spent a year working on the paper. After the paper went out for review, he said, “we received constructive feedback.” Most of the comments, he said, were about maintaining a neutral tone.

“We strived to not use any polemic words, which could be interpreted as bias,” he said. “We decided to just deal with the facts, which would speak for themselves.”

This week a lawyer for Advanced Dermatology and Cosmetic Surgery, which is backed by private equity and is the largest dermatology practice in the United States, called the general counsel at the University of Florida, where two of the authors are employed, demanding specific changes to the paper. The general counsel for the university declined to comment. Dr. Matt Leavitt, the chief executive of Advanced Dermatology, did not respond to requests for a comment.

Dr. Konda says he plans to continue his research into private equity. “I am passionate about this topic,” he said. “I realize we live in a capitalist society and money is a driving force behind many decisions regardless of the industry. However, I believe there has to be a balance between profit and patient care.”

An earlier version of this article gave the wrong location for an office of Dr. Curtis Asbury. He has a dermatology practice in Selbyville, Del., not in Maryland. The article also misstated where Dr. Asbury practices medicine. He is licensed in Delaware and Maryland, not only in Delaware.