Why Are Scientists So Upset About the First Crispr Babies?

A Chinese scientist recently claimed he had produced the world’s first gene-edited babies, setting off a global firestorm. If true — the scientist has not yet published data that would confirm it — his actions would be a sensational breach of international scientific conventions. Although gene editing holds promise to potentially correct dangerous disease-causing mutations and treat some medical conditions, there are many safety and ethical concerns about editing human embryos.

Here are answers to some of the numerous questions swirling around this development.

The scientist, He Jiankui, said he used Crispr, a gene-editing technique, to alter a gene in human embryos — and then implanted the embryos in the womb of a woman, who gave birth to twin girls in November.

That is illegal in many countries, including the United States. China has halted Dr. He’s research and is investigating whether he broke any laws there. Among the concerns are whether the couples involved in Dr. He’s research were adequately informed about the embryo editing and the potential risks involved.

Dr. He says he has submitted his research to a scientific journal. But nothing has been published yet, and he announced the births of the twins before his research could be peer-reviewed by fellow scientists. He also appears to have taken other secretive steps that defy scientific standards.

Which gene did he edit and why?

The gene is called CCR₅. It creates a protein that makes it possible for H.I.V., the virus that causes AIDS, to infect people’s cells. Dr. He said that with the help of an H.I.V./AIDS advocacy organization in China, he recruited couples in which the man had H.I.V. and the woman did not. He used the Crispr-Cas9 editing technique to try to disable the CCR₅ gene in their embryos, with a goal, he said, of creating babies who would be resistant to H.I.V. infection. 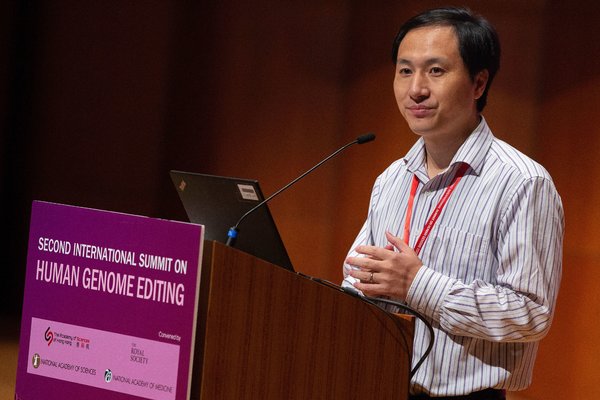 What is Dr. He’s background?

Dr. He, 34, first worked with the Crispr gene-editing technology while obtaining a doctorate in biophysics from Rice University in Houston. He did postdoctoral research at Stanford and returned to his native China in 2012 under a program designed to draw Western-trained Chinese researchers back home. There, he founded two genetic-testing companies, and became affiliated with the Southern University of Science and Technology in Shenzhen.

He presented early phases of his Crispr research to American scientists at conferences in the United States, but disclosed to very few people that he was planning to actually create pregnancies by implanting edited embryos in women.

Why are scientists up in arms?

Changing the genes in an embryo means changing genes in every cell. If the method succeeds, the baby will have alterations that will be inherited by all of the child’s progeny. And that, scientists agree, is a serious undertaking that must be done with great deliberation and only to treat a serious disease for which there are no other options — if it is to be done at all.

Instead, Dr. He went ahead and disabled a perfectly normal gene, CCR₅. While people who are born with both copies of CCR₅ disabled are resistant to H.I.V., they are more susceptible to West Nile virus and Japanese encephalitis. And there are simpler and safer ways to prevent H.I.V. infection.

More worrying, Crispr often inadvertently alters genes other than the one being targeted, and there are also circumstances, called mosaicism, where some cells contain the edited gene and others do not. Dr. He claimed in a video that Crispr did not affect other genes in the twins and that the babies were “born normally and healthy,” but there is no way to know if that is true.

In fact, some of the data Dr. He presented at a conference in Hong Kong, after he announced the birth of the twins, is concerning, several scientists said. For one thing, it indicates that he was able to disable both copies of the CCR₅ gene in only one of the twins, whom Dr. He identified as “Nana.” In the other twin, “Lulu,” only one copy of CCR₅ was disabled, providing limited, if any, protection against H.I.V., but Dr. He implanted the embryo anyway. He said he informed the parents and they wanted both embryos implanted.

Most importantly, said Dr. Kiran Musunuru, a geneticist at the University of Pennsylvania who reviewed the data, “there’s clear evidence of mosaicism” in the edited embryos of both twins. “I was so furious,” Dr. Musunuru said. “This would have been disturbing anyway — gene-edited babies. It made it a hundred times worse knowing that he had totally mosaic embryos. It’s as if you took the embryos and dipped them in acid and said ‘You know what, I’m just going to go ahead with the implantation anyway.’ It’s not that much different.”

While it is unclear if the babies themselves ended up with a mosaic patchwork of cells, Dr. Musunuru said the data shows that Lulu’s placenta was mosaic, which is not a good sign.

Finally, it is not known if his study subjects knew what they were agreeing to. The consent they signed was for an AIDS vaccine development project, and it did not mention all the risks of disabling CCR₅. It said that if Crispr altered other genes, “the project team is not responsible for the risk.”

What are the potential implications?

Many scientists are concerned that Dr. He’s experiment could have a chilling effect on support for legitimate and valuable gene-editing research.

“Should such epic scientific misadventures proceed, a technology with enormous promise for prevention and treatment of disease will be overshadowed by justifiable public outrage, fear, and disgust,” said Dr. Francis Collins, director of the National Institutes of Health.

What are the safeguards against this?

What are the ethical concerns?

Some worry that this is the first step toward using gene editing to create people with extreme intelligence, beauty or athletic ability. But that, for now, is not possible. Such traits are thought to be affected by possibly hundreds of genes acting in concert, and affected in turn by the environment.

The biggest ethical concerns for now are with rogue scientists enticing couples who do not realize the risks to babies that might result from the experiments. And when those children grow up, the altered genes will be passed on to their children, and to their children’s children, for generations to come.

What do we still not know?

Until Dr. He publishes the results of his work in a peer-reviewed medical journal, we will not know the detailed results of the embryo editing, or even whether the twins were actually born.

Dr. He has not submitted his data, nor has he identified the children or parents, other than to provide first names for the twin girls, Lulu and Nana; these may be pseudonyms. We won’t know for many years if Crispr affected genes other than CCR₅. Nor can we gauge the health of the babies now or in the future.

And, of course, we do not know if other scientists will be emboldened to try their own experiments editing the genes of human embryos.

Gina Kolata writes about science and medicine. She has twice been a Pulitzer Prize finalist and is the author of six books, including “Mercies in Disguise: A Story of Hope, a Family’s Genetic Destiny, and The Science That Saved Them.” @ginakolata • Facebook

Pam Belluck is a health and science writer. She was one of seven Times staffers awarded the 2015 Pulitzer Prize for International Reporting for coverage of the Ebola epidemic. She is the author of “Island Practice,” about a colorful and contrarian doctor on Nantucket. @PamBelluck