Which Americans can get a vaccine now? Here’s a look at the new guidance.

The U.S. government, faced with an unrelenting surge in coronavirus cases, issued recommendations this week regarding which people in the country should be vaccinated first. Here are answers to some common questions.

Who is now eligible to be vaccinated, according to federal guidance?

On Tuesday, Alex M. Azar II, the health secretary, urged all states to open up eligibility to everyone 65 and older and to adults of any age with medical conditions that put them at high risk of becoming seriously ill or dying from Covid-19.

In all, that is more than 150 million people — almost half the population. They now join millions of health care workers and residents of long-term care facilities who previously qualified.

Mr. Azar did not specify which conditions would make someone eligible for vaccination now; presumably it will be up to governors to decide, as will the question of what documentation to require. But the federal Centers for Disease Control and Prevention has published a list of particularly high-risk conditions, including cancer, diabetes and obesity.

How does eligibility vary by state, and why?

Although the C.D.C. issued recommendations last month for which groups states should vaccinate initially while the vaccine supply is still relatively low, the priorities are not binding and each state has come up with its own groupings.

The federal government cannot require states to change the prioritization plans they have already announced, although the new pressure from Mr. Azar, along with growing public impatience as deaths from the virus continue to hit new peaks, may sway many to do so.

In coming up with priority groups, state officials considered criteria like who is most likely to die if they contract Covid-19 — including people of color, older people and people with underlying medical conditions — and which professions are critical to helping the economy fully reopen. Each state’s demographics also played a role.

This depends on what state or even what county you live in.

Some local public health departments have set up portals in which people can make appointments. Others are holding mass vaccination events and inoculating people on a first-come, first-served basis.

Generally, doctor’s offices and pharmacies have asked that patients and customers not call them seeking vaccine appointments just yet, and instead wait to be contacted.

Most pharmacies are not yet offering the vaccine, but CVS, Walgreens and a number of other chain pharmacies, including some in grocery and big-box stores, will soon start doing so through a partnership with the federal government.

With the federal government saying that older people and those with underlying medical conditions should be vaccinated next, what happens to essential workers whose jobs require them to come face to face with other people? Are they eligible now, too?

In some states, yes.

Health care workers in every state were the first to be offered the vaccine. And before Mr. Azar’s directive this week, several states had already opened vaccination to certain categories of “frontline” essential workers, such as police officers, firefighters, teachers, child-care workers and public transit employees.

But other states that had planned to start offering the vaccine to some essential workers in the coming weeks may reprioritize now based on Mr. Azar’s new guidance.

There is nothing stopping states from opening vaccination to a new priority group before they have reached everyone in an earlier group, but supply is an important consideration.

How many vaccine doses does the United States have access to?

Pfizer and Moderna, the two companies whose vaccines have been approved for emergency use in the United States, together have pledged to provide 400 million doses over the next seven months.

Both vaccines require two doses, so that will be enough for 200 million people, out of roughly 260 million who are currently eligible to be vaccinated. Children younger than 16 are not yet eligible for Pfizer’s vaccine, and those younger than 18 cannot yet take Moderna’s.

How many people have been vaccinated so far?

The publicly available data lags by at least a few days, so it is hard to know for sure. But the C.D.C. reported on Wednesday that about 10.3 million people had received an initial dose, out of 29.4 million doses distributed around the country so far.

That includes nearly 1.1 million doses that have been given to residents and staff members in nursing homes and other long-term care facilities. 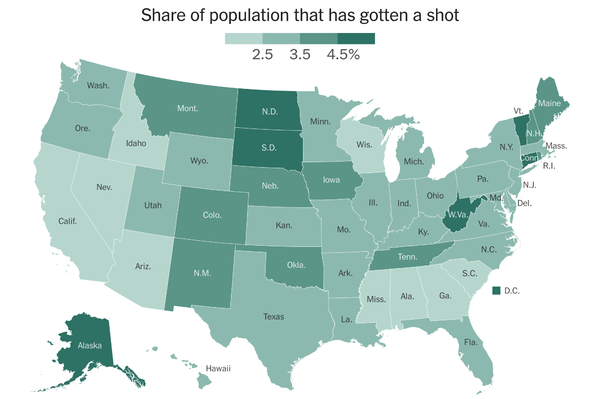 See How the Vaccine Rollout Is Going in Your State

The government says it has distributed about 29.4 million doses of Covid-19 vaccines to states and other jurisdictions. See where the shots have gone.