When it comes to feeling pain, touch or an itch, location matters 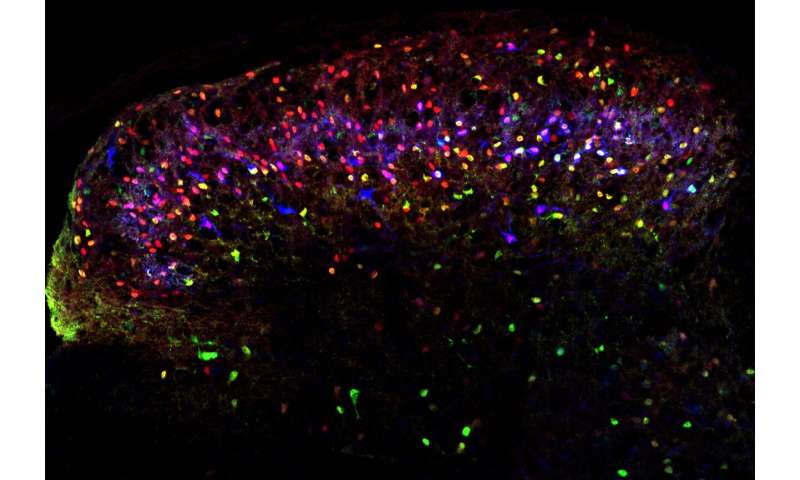 When you touch a hot stove, your hand reflexively pulls away; if you miss a rung on a ladder, you instinctively catch yourself. Both motions take a fraction of a second and require no forethought. Now, researchers at the Salk Institute have mapped the physical organization of cells in the spinal cord that help mediate these and similar critical “sensorimotor reflexes.”

The new blueprint of this aspect of the sensorimotor system, described online in Neuron on November 11, 2020, could lead to a better understanding of how it develops and can go awry in conditions such as chronic itch or pain.

“There’s been a lot of research done at the periphery of this system, looking at how cells in the skin and muscles generate signals, but we didn’t know how that sensory information is trafficked and interpreted once it reaches the spinal cord,” says Martyn Goulding, a professor in Salk’s Molecular Neurobiology Laboratory and holder of the Frederick W. and Joanna J. Mitchell Chair. “This new work gives us a fundamental understanding of the architecture of our sensorimotor system.”

Reflexive behaviors—seen even in newborn babies—are considered some of the simplest building blocks for movement. But reflexes must quickly translate information from sensory neurons that detect touch, heat and painful stimuli to motor neurons, which cause the muscles to take action. For most reflexes, the connections between the sensory neurons and motor neurons are mediated by interneurons in the spinal cord, which serve as sort of “middlemen,” thereby saving time by bypassing the brain. How these middlemen are organized to encode reflexive actions is poorly understood.

Goulding and his colleagues turned to a set of molecular engineering tools they’ve developed over the past decade to examine the organization of these spinal reflexes in mice. First, they mapped which interneurons were active when mice responded reflexively to sensations, like itch, pain or touch. They then probed the function of interneurons by turning them on and off individually and observing how the resulting reflex behaviors were affected.

“What we found is that each sensorimotor reflex was defined by neurons in the same physical space,” says postdoctoral researcher Graziana Gatto, the first author of the new paper. “Different neurons in the same place, even if they had very different molecular signatures, had the same function, while more similar neurons located in different areas of the spinal cord were responsible for different reflexes.”

Interneurons in the outermost layer of the spinal cord were responsible for shuttling reflexive messages related to itch between sensory and motor cells. Deeper interneurons relayed messages of pain—causing a mouse to move a foot touched by a pin, for instance. And the deepest set of interneurons helped mice reflexively keep their balance, stabilizing their body to prevent falling. But within each spatial area, neurons had varying molecular properties and identities.

“These reflexive behaviors have to be very robust for survival,” says Goulding. “So, having different classes of interneurons in each area that contribute to a particular reflex builds redundancy into the system.”

By demonstrating that the location of each interneuron type within the spinal cord matters more than the cell’s developmental origin or genetic identity, the team tested and confirmed an existing theory about how these reflex systems are organized.