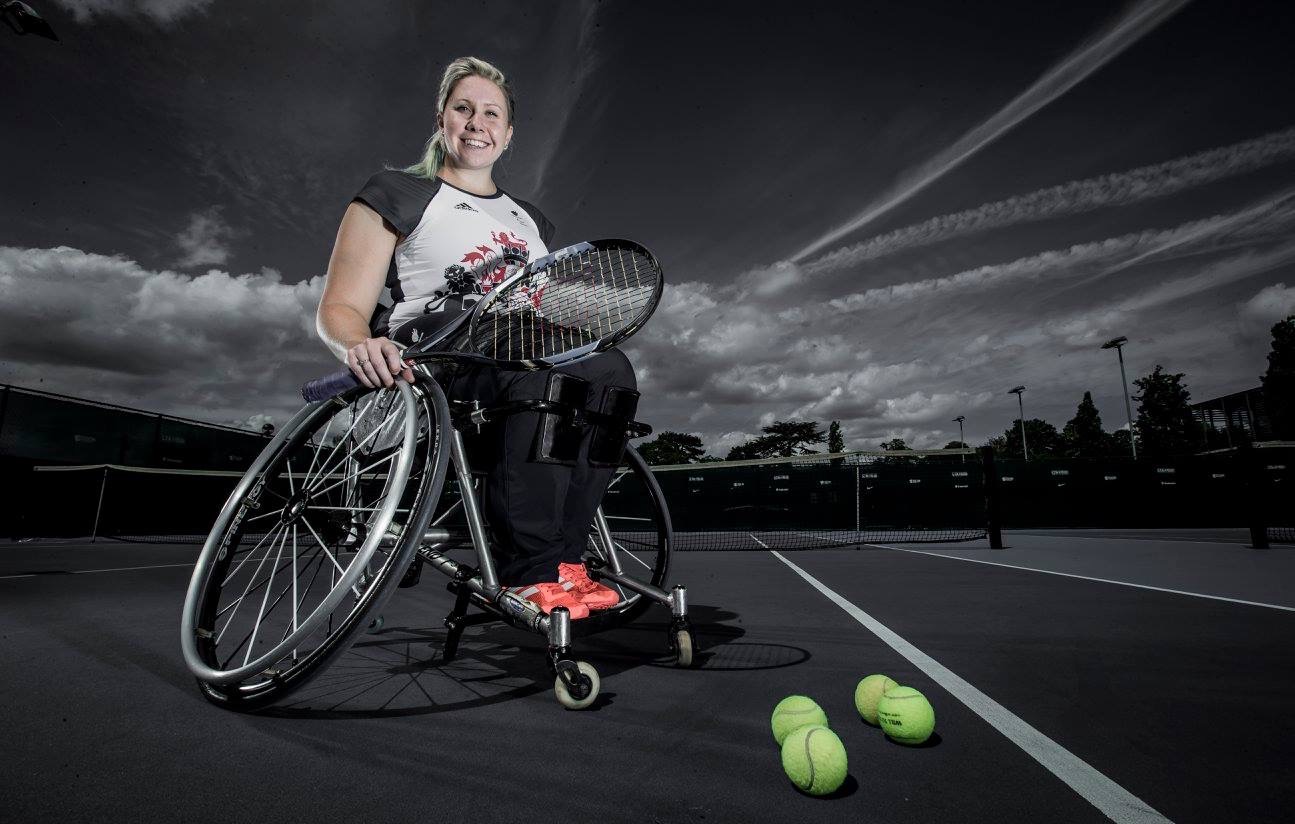 Louise Hunt is one of Britain’s best wheelchair tennis players, competing in the Paralympic Games in London and the Rio 2016 Paralympic Games, qualifying at her highest ever ranking to date of 10th in the World.

Having recently retired and making her name in commentating, motivational speaking and mentoring, sport has taken a different role in Louise’s life and keeping fit has become more of a challenge – and has a totally different motivation.

She still manages to hit a ball once a week, go swimming and use her handbike, but says people with disabilities all too often have barriers when it comes to staying in shape.

How do you keep fit?

It’s a massive shift from being an athlete, I now have to find ways to keep fit. As an athlete the whole day was working on body and mind and retiring has been a shock to the system.

I have a dog now, which helps and I walk the dog twice a day and that’s the biggest help for my baseline fitness. I also try at least once a week to have a hitting session, although sometimes it’s tough to fit it in.

I have an indoor handbike, and a road one, too, but it is a challenge with the weather and I don’t always feel that safe when going out on my own.

Do you face many fitness challenges?

It’s really frustrating. I’m lucky because I’ve grown up in the sporting world and have the mentality to find alternatives and be creative with exercise – I’ve had to train my brain to think like that. But for people with disabilities there are so many barriers.

There are expectations put on people that they don’t need to exercise with a disability for some reason. Then there is access that is a barrier. Sporting places are not always accessible. It’s not just steps, is there info in braille, hearing loops, things like that. Then a lot of equipment is not adapted. I would hate going on my own to the gym because I couldn’t reach anything.

Does this mean that people with disabilities can struggle with their general fitness?

I have met a lot of people with disabilities who don’t get out there and get their bodies moving. When people have medical issues and struggle with pain it can also be really daunting to do exercise. Doing the appropriate exercise can help, though.

How do you stay motivated to stay fit away from professional sport?

I feel quite motivated so set my own targets – but my motivation has changed. When I first stopped playing tennis nothing happened for a few weeks. Then I felt my body change and that was what motivated me to get moving again.

So the motivation has gone from winning and being the best in the world, rankings and money, and now I just want to feel well. Rewards can feel diluted, but feeling good is probably a much better motivation than the ones before.

How did you get through lockdown – did you pick up any fitness fads?

During lockdown loads of cool things came out on social media to help people with disabilities. I joined a seated Zoomba class in Holland. I would go on there every Monday.

I think I became more aware of what was out there because I looked but I think there was more happening for people with disabilities than before – one thing that came from the awareness is that it highlighted people who are vulnerable. It also showed the world is adaptable if we just put a bit of effort in.

When you are mentoring, what is the most important thing that you say to people to motivate them?

I’m really passionate about getting people to try something new – you never know until you give it a try. If you hate it just try something else. So I try to encourage people to enjoy that journey of exploring things. And if someone is not motivated, remind yourself of why you are doing this.

There is a benefit to exercise – you might feel better, have a clearer mind, or even eat something tasty for dinner – remind yourself of that if you don’t feel like doing it.

Do you have a guilty pleasure when it comes to food or drink?

I don’t see the need to cut anything out completely – you need to keep the treats and rewards there. If you cut everything out then you just get fed up. There is no point in torturing yourself. Generally I eat healthily. I love fruit and veg. I’m obsessed with the five-a-day.

What makes you happy?

It’s not fitness but I have been going to a rock choir since retirement. When I sing I feel so much better. It helps me disconnect from the day to day. Exercise is great for physical wellbeing but singing helps me just escape. I’m just focusing on one thing – it’s the best stress-buster in the world.

What would you like to achieve in your career?

For me, it was my ambition to become self-employed and I did that this year. At the moment I do some many things I enjoy I just want to keep going. I want to commit more time to animals, go to other countries and have a family, so my goal is to have more money so I can have time to do all the things I want to do.