What To Do When A Condom Gets Stuck Inside Of You

Having sex means mentally preparing yourself for all manner of potentially messy situations. One possibility? A condom getting stuck or lodged inside you after intercourse.

While your first instinct may be to panic, staying calm and knowing what steps to take is a better response. HuffPost asked experts to share what you should do if you ever find yourself dealing with a stubborn condom.

It’s probably difficult, but the first thing you should attempt to do is relax, said Alyssa Dweck, a New York-based gynecologist and author.

“If you tense up your vaginal muscles, it’s going to be uncomfortable to insert your finger and try to get it out,” she said.

Dweck added that you may even want to get into a warm shower or bath to help relax your body. Then, after checking that your hands are clean and your fingernails aren’t too long, use an index finger to feel around and sweep the back wall of the vagina. When you find the condom, try to hook your finger into it and pull it out, Dweck said.

Whatever you do, don’t use any tools like tweezers to reach it. With tweezers, as well as long, sharp fingernails, you could knick yourself. Since the vagina and vulva are very vascular, Dweck said, cuts in that area will bleed more. Your partner can absolutely assist with this, so long as they follow the same hand maintenance rules.

Once again, don’t panic. Dweck said it’s possible that the condom is bunched up closer to your cervix and out of reach of fingers, or it’s lodged in one of your vaginal fornices, which are pocket-like structures near your cervix.

This is a fairly common occurrence, and Dweck said she finds herself “fishing for condoms frequently” at her practice. During daytime hours, you could call your gynecologist to see if they can squeeze you in, but an urgent care center would be equipped to handle a condom retrieval as well.

The procedure would be somewhat like a pap smear, Dweck noted. A doctor would use a speculum to open your vagina and remove the condom with a small instrument.

If a condom is stuck in your anus …

If you can reach it, the same rules apply as above, according to Joseph Frankhouse, a Portland, Oregon-based fellow of the American Society of Colon and Rectal Surgeons and leader of the Colon and Rectal surgery program for Legacy Health.

“Your first goal would be to see if using some fingers, you can find the edge and pull it out,” he said.

If that doesn’t work, your body has a pretty good backup plan. In all likelihood, you’ll pass it with your next bowel movement, and if not that one, probably the one after that, Frankhouse said.

And if it’s still in your anus …

Since the condom itself doesn’t present serious health risks, Frankhouse said, you can give it another try with a gentle, over-the-counter laxative like Miralax.

And if it’s really, really not coming loose, your next step would be to see a colorectal surgeon or a gastroenterologist. “We can put a speculum in your bottom and we could see if it’s visible. It might very well be easily grasped and retrieved in that fashion,” Frankhouse said, “or one could use an endoscope or colonoscope to look in there and make sure everything’s OK and remove it.” 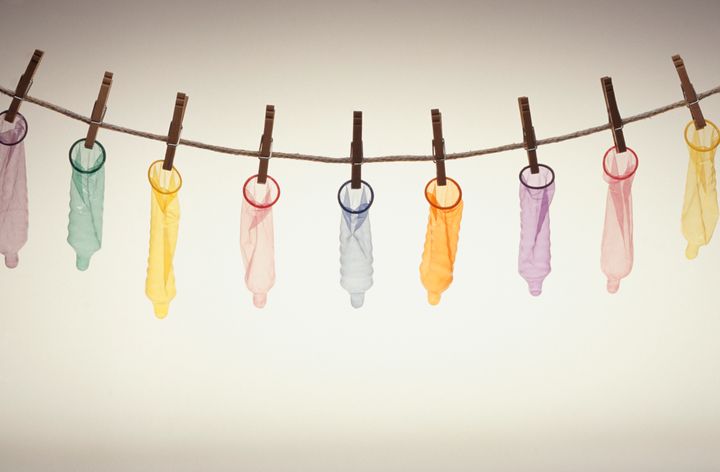 What you should do once it’s out.

You may need some tests or medication because of the risk of pregnancy or sexually transmitted infections. It’s possible some semen seeped out of the condom while it was inside you, Dweck said.

If you were having vaginal intercourse and didn’t use any form of birth control beyond the condom ― like the pill or an IUD ― you can take Plan B to prevent pregnancy, provided it’s within the 72-hour window.

While this is not especially likely to happen, a condom left in a vagina for a longer period of time can also lead to infections like bacterial vaginosis or yeast infection.

If you’re uncertain about your partner’s STI status, it’s never a bad idea to get tested. Dweck also recommended following a standard course of treatment: For potential gonorrhea, your doctor can give you a one-time shot of Rocephin. For chlamydia, a one-time dose of Zithromax can be administered.

“If someone is not immunized against Hepatitis B, then a shot or a vaccine might be helpful,” she added. If you believe you may have been exposed to HIV, then you may also need the antiretroviral PEP to prevent infection. Don’t delay ― it’s best to begin PEP within 36 hours and definitely no later than 72 hours after a possible exposure.

While this is not especially likely to happen, a condom left in a vagina for a longer period of time can eventually lead to infections like bacterial vaginosis or yeast infection, so being aware is key, Dweck said.

How you can prevent this from happening in the future.

Making sure the condom is the correct size is the first step, Dweck said, because a condom that’s too big is more likely to fall off.

Secondly, make sure your post-intercourse routine is on point. If you’re wearing a condom, you should grip the base of the penis firmly as you withdraw to keep the condom on you and not in your partner. If you’re not the one wearing the condom, don’t take it for granted that your partner has followed the best procedure ― it never hurts to do a quick visual and verbal check that the condom was removed intact. That way, you’ll be able to address any issues more quickly.

And finally, while there’s no immediate rush to pull out after sex, Frankhouse said that “an erect penis is going to fill the condom a lot better,” and as you lose your erection post-ejaculation, the risk of the condom slipping off increases.

Ultimately, keeping a level head and being aware of the risks and resources for help is the best way to get out of a sticky spot.

Sex Ed for Grown-Ups is a series tackling everything you didn’t learn about sex in school — beyond the birds and the bees. Keep checking back for more expert-based articles and personal stories.