What is Scanning Probe Microscopy?

Scanning probe microscopy is used to create images of nanoscale surfaces and structures or manipulate atoms to move them in specific patterns. It involves a physical probe that scans over the surface of a specimen gathering data that is used to generate the image or manipulate the atoms.

Scanning probe microscopes work differently than optical microscopes because the operator does not have a direct view of the surface but an image that represents the structure of the surface. They are very powerful and can have a very high resolution, up to a nanometer. 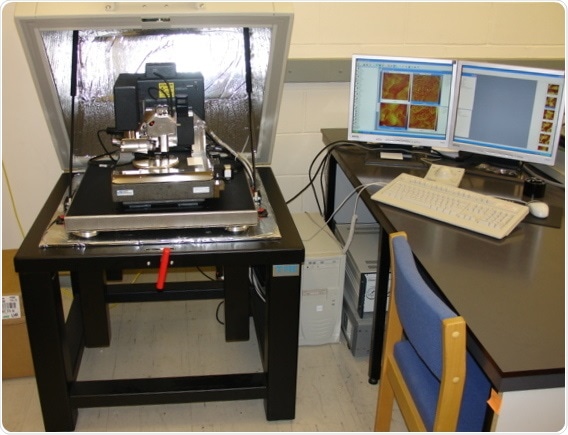 Optical microscopes were the first type of microscopes that were developed and used in scientific research, but it was soon discovered that there was a limit to their capabilities. When viewing specimens smaller than the wavelength of the light, the image became blurry or distorted.

The electron microscope was developed to overcome this limitation in 1921, which uses beams of electrons to create an image of the sample. This allowed for a significant increase in resolution of the microscopic images created.

Scanning probe microscopy was developed late in the twentieth century to allow the investigation of surfaces with atomic resolution, which is beyond the capability of an electron microscope. Dr. Gerd Binnig and Dr. Heinrich Rohrer invented the first scanning tunneling microscope in 1981. This was a significant breakthrough in the field of nanotechnology because it allowed scientists to view a representation of the surface of samples at an atomic level.

It is now possible for scientists to view individual atoms, study their properties, and manipulate them to create new structures.

There are several different types of scanning probe microscopes including:

How does it work?

A scanning probe microscope has a sharp probe tip on the end of a cantilever, which can scan the surface of the specimen. The tip moves back and forth in a very controlled manner and it is possible to move the probe atom by atom.

A force deflects the cantilever when the tip gets close to the surface of the sample, which can be measured by a laser reflected from the cantilever into photodiodes. There are many different forces that may cause the deflections, such as mechanical, electrostatic, magnetic, chemical bonds, van der Waals and capillary forces.

The data from the laser reflections detected by the photodiodes is combined to generate an image by a computer. The image has no color because it is a representation of properties rather than light, although they are often given color by the computer program to assist in differentiating the different properties of the specimen.

There are various techniques used in scanning probe microscopy, depending on the purpose of the study.

For example, the microscope may be set to “contact mode,” which involves a constant force between the cantilever tip and the surface of the specimen. This mode allows an image of the surface to be produced rapidly.

Alternatively, the microscope may be set to “tapping mode,” which involves oscillation of the cantilever so that the tip touches the surface of the specimen intermittently. This is most useful when the study sample has a soft surface.

Yolanda graduated with a Bachelor of Pharmacy at the University of South Australia and has experience working in both Australia and Italy. She is passionate about how medicine, diet and lifestyle affect our health and enjoys helping people understand this. In her spare time she loves to explore the world and learn about new cultures and languages.