What drives people to go to work when they're sick? Experts explain 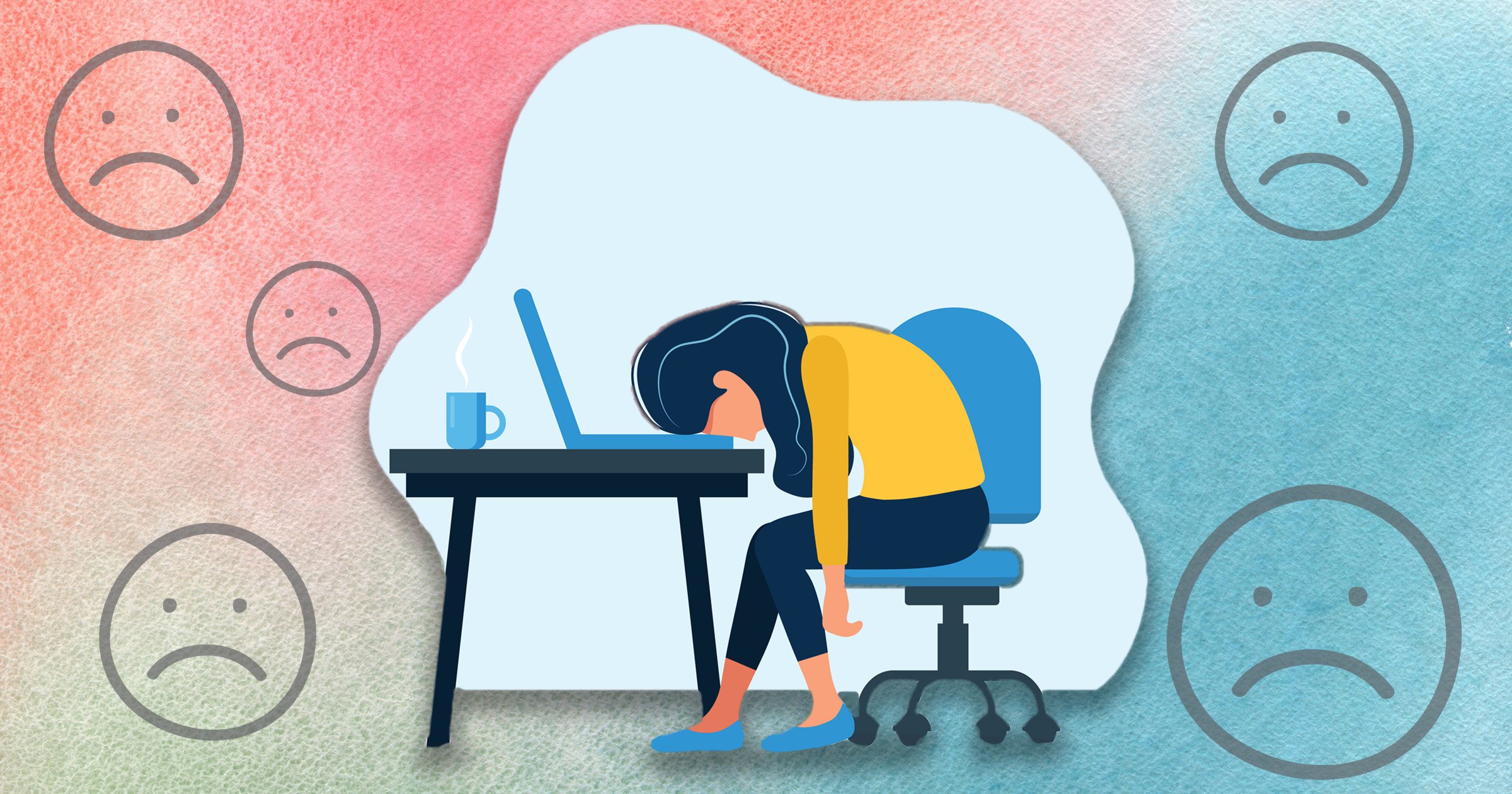 We’ve all been there. You wake up to the sound of your alarm going off for work and can’t believe it’s time to get up, because you feel so awful.

Maybe it feels like your head has been squeezed into a vice, your throat feels like sandpaper or your stomach is doing flips.

Whatever is going on with you, you know what you need: plenty of fluids, medicine and, above all, a day spent resting in bed.

The last thing you need is a day at work. But you sigh, roll over and get up anyway, pushing the thought of taking a day off from your mind.

This is the reality for around three-quarters of workers, according to a Patient Claim Line survey of 2,000 Britons.

The survey found that 76% of workers have forced themselves to go to work despite being ill, and one in three admit to doing this repeatedly.

Women were less likely than men to take time off while poorly, with 79% admitting to working when they don’t feel well enough to.

This is mirrored by the results of a survey from alldayPA, which found that 70% of full-time, part-time and self-employed workers have continued working if they’re unwell, while others haven’t taken any holiday days.

This isn’t a case of people being workaholics and not knowing how to take time off.

For many, taking the day off work just isn’t a possibility. Around 3.7million people (12%) in the UK are in low paid and insecure work.

Being in insecure work means you are freelance, self-employed or working on a zero-hours contract. In these types of jobs you don’t tend to get sick pay, so taking the day off means you lose that day’s wages.

When you are on a low income, or providing for people dependent on you, taking the day off isn’t something you can afford to do.

Prioritising money over health has become more of a reality for many now that the cost of living is going up, including the skyrocketing energy bills, while wages stay the same.

People are forcing themselves to work longer hours to keep themselves afloat, rather than taking time off.

Beyond the pressing financial necessity, why else might people force themselves into work when they are sick?

Jessica Brewer, a HR Strategist and Leadership Development Coach, says employees feel the ‘weight of responsibility’ acutely, especially when they are in a small business.

She adds that there is a fear that ‘if they stop the work will just pile up and they will have to work twice as hard when they return.’

Reasons that employees may force themselves to work

Employees are being hit with a crushing combination of external and internal pressures, explains Dr Paul O’Connell.

There’s also some interesting psychology going on here. The culture of presenteeism, feeling like you need to be at work even when you are unwell, has been drilled into many of us.

Ruth Kudzi, founder of the Optimus Coach Academy, says that at school we are praised for full attendance. This filters into working environments, where colleagues are praised for never taking a day off.

She continues: ‘If people see managers and senior leaders powering through they believe that they also have to, equally if they are close to their peers they may go into work to ensure they don’t have to “pick up the slack”.’

Beyond these pressures, the decision not to work is driven by fear – fear that you won’t be believed, or that you could lose your job.

In the Patient Claim Line survey, one in three participants voiced concerns that other members of staff would think they were lying if they did take a sick day.

Young people (18-34 year-olds) who responded to the survey were also the most fearful about taking time off.

Worryingly, nearly two-thirds of participants in the Patient Claim Line survey admitted to being mostly unaware of their legal rights when it comes to taking time off for a medical appointment, and nearly one-third of Brits aren’t aware of their rights as an employee at all.

A quarter of participants also confessed that they worry that they may get fired if they take too many days off for a long-term illness.

Should workers actually be worried about this? It’s complicated.

Patient Claim Line’s HR Director, Tim Scott, says: ‘As a worker, you have the right to call in sick if you are too unwell to work, and forcing yourself to do the contrary could worsen your health.

‘There is no general statutory right to time off, paid or unpaid, to attend medical or dental appointments. That may change if the situation is urgent as, in this situation, statutory or contractual sick pay might be due.’

There are five ‘potentially’ fair reasons to fire employees under UK law and ‘capability’ is one.

Tim said: ‘Note that this is only potentially fair: whether a dismissal is fair will depend on the reasonableness of the employer’s decision in the particular circumstances of the case and the procedure that they have followed.’

‘Various factors need to be considered, including the nature of the illness, the prognosis and prospects for a return to work, the effect of the absence on the employer and the rest of the workforce and the employee’s length of service.

‘There are also important provisions in place protecting people who have a disability – this is an area in which to seek specialist advice if necessary.’

This is all a bit complicated. It basically means that while there are laws protecting you in the workplace, they are open to interpretation.

When you’re wrestling with all the worries, it can help to reframe it. Can you actually do your job, safely, when you’re unwell?

Paula Allen, Global Leader and Senior Vice-President of Research and Total Wellbeing at LifeWorks says: ‘It’s important to listen to our bodies and if you’re finding that a task you used to be able to do seamlessly in the workplace, now feel like a chore – then it’s time to take a break.

‘Step back, pay attention to your limits and communicate how you feel to your manager.’

This applies to standing all day when you need to be sitting down, or making your unwitting co-workers sick.

However, in this post-Covid world, there is a stigma that employees shouldn’t take sick days due to the perception that you’re fine to work as you’re not spreading germs in an office or enduring a long commute.

This perception is wrong, Paula says: ‘It’s still a massive strain on our bodies and wellbeing to continue working when unwell.

‘The same reasons for working or not working still apply. Your need for self-care is still as important.’

The pressure to ‘push through it’ becomes stronger when you live with a chronic illness, which can last from a few months to a lifetime and includes conditions such as diabetes, IBS, blood disorders, mental illness and ‘invisible illnesses’.

The single mother of two had to downsize her home in 2021 to something more affordable, as her chronic illness meant her income more than halved.

She says: ‘If I was to stay off sick, receiving sick benefits alone would simply not cover my mortgage and our bills and food.’

When she did take time off, she felt guilty and ashamed. She tried to keep working, but this made her more ill.

The turning point came when she realised she had to ‘let go of unrealistic expectations’of herself, and accept help.

She adds: ‘It was a bit like trial and error until I learned to adjust.

‘The biggest issue is not always the illness itself but the exhaustion, energy levels and not knowing how you will feel when you wake up.

‘I used to worry that I took sick more often than colleagues and also have to reschedule clients and important events.’

Juliette then started thinking about Christine Miserandino’s ‘spoon theory’, an analogy that we only have a certain amount of spoons (AKA energy), and when they are all used up, there is no more.

This was a game-changer for Juliette, who now accepted that people with chronic illnesses have lots of energy on some days, and need lots of bed rest the next.

Work has to fit around this. It’s important to remember that employers are required by law to make reasonable adjustments to help you work, and push back against any illegal threats to your rights as workers.

If work is making you unwell, it’s important that you tell your manager as soon as possible. You may even be able to pull back on some tasks rather than taking a full day off.

The longer you keep working when you shouldn’t be, the more you risk experiencing the effects of chronic stress and burnout, and ultimately need more time off.

You deserve to put your health first, even when modern working makes you feel like you don’t. If you get sick pay, take it, and focus on getting better – the job won’t care if you end up really sick.