A weight loss drug abandoned by doctors in the 1990s over heart damage fears may cut the number of seizures in children with severe epilepsy.

Fenfluramine slashed the number of fits by up to 75 per cent among children and teenagers with Dravet syndrome, a study found.

Dravet syndrome affects up to one in every 15,000 children – as many as 49 babies each year in the UK or 253 in the US – and can cause fatal seizures.

Researchers claimed the work gave ‘hope for a major breakthrough’. No cure exists for Dravet, and drugs don’t work for half of patients. 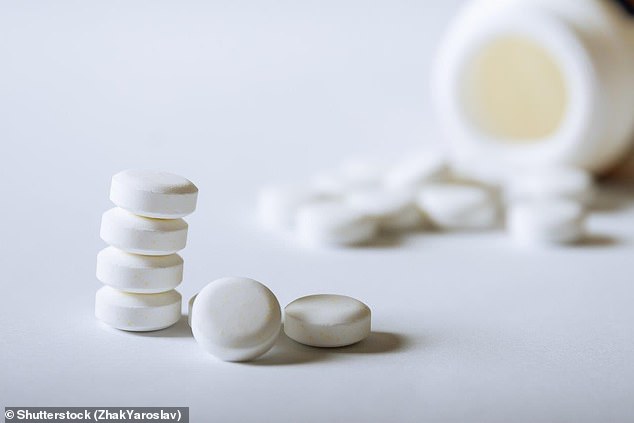 Fenfluramine used to be used as a weight loss therapy but was withdrawn from the market because it was giving people leaky heart valves. But now scientists say it could be given to epileptic children in far smaller doses (stock image)

An international study involving London’s Great Ormond Street Hospital and the US pharmaceutical company Zogenix tested the drug on children around the world.

It was trialled on 119 children aged between two and 18 in the US, Canada, Australia and western Europe – nine dropped out before the end.

The children suffered severe seizures every day, on average, before they started the trial.

By the end of a 14-week test children taking the highest fenfluramine dose reduced their average from 21 over four weeks to just five (75 per cent).

Fenfluramine was prescribed in the 1990s as a weight-loss remedy for overweight adults.

However, a worrying number of patients taking high doses (up to 220mg per day) started to develop heart problems.

When scientists tested 271 patients taking the medication in the US, they found 86 of them – one in three – had leaky heart valves, a condition known medically as aortic regurgitation.

In 1997 fenfluramine manufacturers voluntarily withdrew the medicine from the market.

The lower dose group reduced their number of seizures from 18 to 13 (42 per cent).

In the placebo group, who thought they were having treatment but actually weren’t, the number of seizures dropped from an average of 27 to 22 (19 per cent).

‘The frequent seizures suffered in Dravet syndrome impact on the lives of patients and their families,’ said Dr Helen Cross, a neurologist at Great Ormond Street.

‘In our clinical trial we saw impressive reductions in seizures in the patients who received fenfluramine compared with those on the placebo.

‘And although further study will need to assess the long-term safety, I am optimistic about what we have seen so far.

The study was published in the prestigious British medical journal The Lancet.

Concerns about the safety of the drug have risen out of the fact it was withdrawn from the markets in 1997.

It had been used to make adults lose weight but was found to be giving people leaky valves in their hearts.

People taking it then, however, were having much larger doses – up to 220mg per day – than the children in the study who had a maximum of 0.7mg per kg of body weight (around 21mg for a 30kg/66lbs child, the average weight of a nine-year-old).

The children’s hearts appeared unaffected by the drug but some (20-38 per cent) said they had lost their appetites, and others lost a significant amount of weight.

Other side effects included tiredness and diarrhoea, and five children quit the trial because of the side effects.

They admitted side effects may have made it obvious which children were getting the placebo and which had the high dose, which could have affected results.

But on the whole the scientists said the drug was well-tolerated and it improved their epilepsy.

Arnold Gammaitoni, from the pharmaceutical company Zogenix, said: ‘Since the trial finished, most of the patients from this study have continued treatment in an ongoing, long-term open label extension study, where we have continued to see clinically meaningful reduction of convulsive seizures with no signs of heart valve problems.’

Professor Samuel Berkovic, from the Epilepsy Research Centre at the University of Melbourne in Australia, was not involved with the research but added: ‘Until recently, infants with severe epilepsy and intellectual disability often received a diagnosis of not much more than that.

‘The cause was usually unknown, treatment was supportive, and families often felt disempowered due to lack of information about the condition.

‘The transformation of this field from one of hopelessness, if not disinterest, to exciting cutting-edge science with definite therapeutic advances and hope for a major breakthrough is remarkable.’

WHAT IS DRAVET SYNDROME?

Dravet syndrome is a rare but deadly form of epilepsy.

The condition is caused by a genetic mutation which happens before a baby is born and this can cause a malfunction in the way the brain regulates electrical signals passing through it.

Uncontrolled activity in the brain can lead to seizures and, in the case of Dravet syndrome patients, these can be extremely severe and even fatal.

Almost half of patients with the condition suffer from more than three convulsive seizures each month even if they are taking antiepileptic drugs.

Dravet syndrome, as well as causing epilepsy, also causes delayed development in children and patients are more likely than average to have autism, ADHD or behaviour problems, difficulty sleeping, physical disabilities or issues with their immune systems.

The condition cannot be cured, only controlled with medication.