Venezuela man, 79, has beer bottle stuck up his bottom

Venezuela man, 79, turns up in emergency department with a beer bottle stuck up his butt — and tells doctors ‘thieves put it there’

A Venezuelan man needed emergency surgery after a beer bottle became stuck in his backside.

The 79-year-old, who has not been named, claimed the bottle was shoved up his anus by thieves who tried to rob him, according to local media.

He said three men broke into his home in Palo Negro, in central Venezuela, and became angry when they could not find any valuables.

The patient went to La Ovallera Hospital in severe pain and X-ray images taken shortly after admission show the object lodged in his rear, neck-first.

It is not clear if a police investigation will be launched. 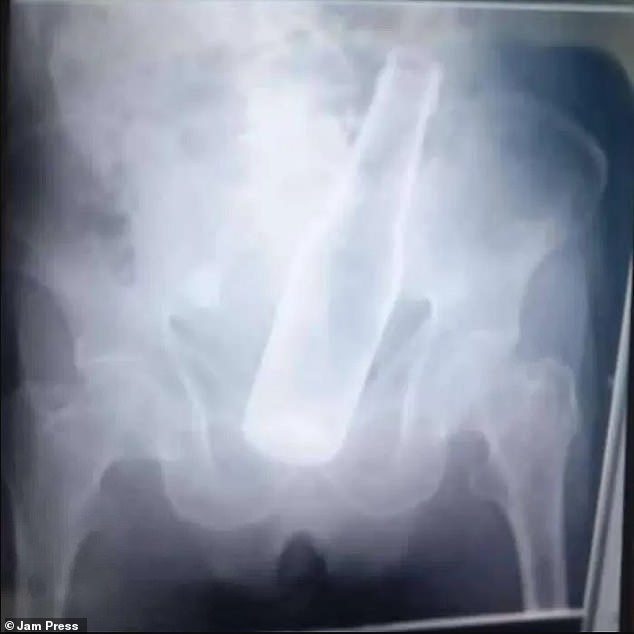 Patient, 79 years old, claimed the bottle (pictured) was put there by three thieves who became angry when they could not find any valuables to steal

The individual, who has not been named, had emergency surgery at the Central Hospital of Maracay to release the bottle

After the diagnosis, the patient was treated at the Central Hospital of Maracay about six miles from the initial clinic.

According to reports, the patient had ’emergency surgery’ but no further details were given.

In some cases, foreign objects that become stuck in the rectum are close enough to the anus they can be removed by hand.

But one of the main problems is there is a strong suction between the object and the rectum walls.

Sometimes the doctor will pass a tube between the object and the wall of the rectum to try to equalize the pressure as the object is removed, which is an uncomfortable procedure that requires sedation.

If the object is too deep, a full operation may have to be carried out.

It comes after army bomb squad technicians were sent to a hospital in England after a man arrived in the emergency department with a WWII anti-tank shell lodged into his rectum.

Medics called for specialist support after the man presented in the Accident and Emergency unit of Gloucestershire Royal Hospital in Gloucester when he could not remove the 57mm shell.

The military collector claimed he armour-piercing munition was from his private arsenal. He told medics the 80-year-old explosive device became lodged after he tripped and fell awkwardly.