Is this how cancer spreads so easily? Tumours push through blood vessels with 200 TIMES the force of ordinary cells

It’s a topic that has baffled scientists for decades – but now the reason why cancer spreads so easily may been uncovered.

Tumours push through blood vessels with 200 times the force of ordinary cells, according to a study by University College London.

This is thought to be due to cancerous cells having more receptors on their surfaces, which allow them to cluster together and act as one strong unit.

Blocking these receptors may help to prevent cancers spreading in the body, according to the researchers. 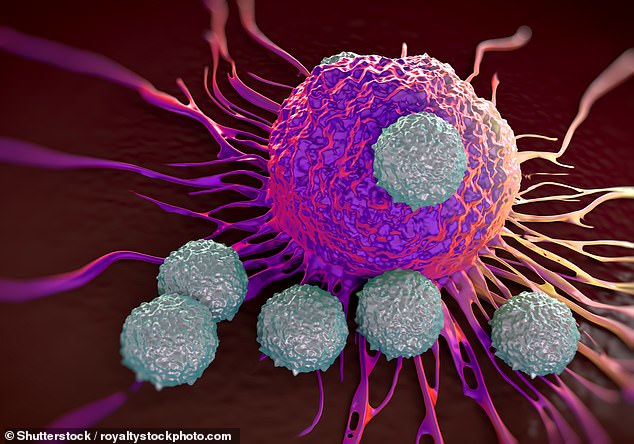 To test the strength of both healthy and cancerous cells, the researchers created a microscopic diving-board like device.

The force of the cells was measured by how much the ‘diving board’ bent when the cells pushed against it.

Results showed breast cancer cells push with a force that is up to 200 times bigger than healthy cells.

Cancer cells are thought to cluster together and form a network that sticks to the walls of veins and arteries.

This generates a strong force that lets tumours break through weak points in blood vessels.

‘When we performed measurements we realised that the force from cancer cells exerted was much, much higher,’ study author Dr Joseph Ndieyira told The Times.

‘This allows them to move from the breast to bones or any other part of the body.’

All cells are covered in receptors that respond to different hormones and substances in the blood and on other cells.

When cells cluster together, these receptors cause their behaviour to become coordinated.

Tumours are thought to be stronger due to them having more of these receptors on their surfaces.

The researchers believe blocking these receptors could reduce a tumour’s force on blood vessel walls, which may slow or prevent cancers from spreading.

Cancer cells can spread to other parts of the body when parts of the tumour break into the bloodstream or lymphatic system.

‘These interactions affect the way cancers develop and spread to other organs, so understanding more about this relationship could help stop cancer in its tracks.’

The study was published in the Nature journal Communications Biology.

One in two people born after 1960 in the UK will develop cancer at some point in their lives, according to figures.