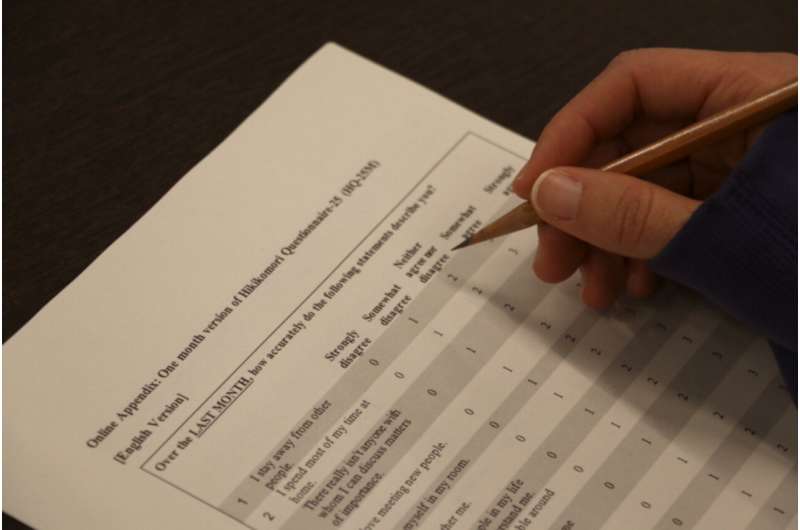 Kyushu University researchers have developed a new ‘Hikikomori Questionnaire’ in an effort to detect the condition at an earlier stage. Preliminary results show that isolation is a possible factor that can distinguish between non-hikikomori and pre-hikikomori individuals, providing possible validation of the new questionnaire as a tool for early detection and treatment.

Hikikomori is a complex pathological condition where an individual withdraws from society and remains at home almost every day for more than six months. Although it may be viewed as a condition unique to Japan, hikikomori has been reported globally from across Asia, to Europe and North America.

“Hikikomori was first defined in 1998. As we studied the condition, we found that it is a very complex pathology caused by an overlap of physical, societal, and psychological conditions,” explains Takahiro A. Kato of Kyushu University’s Faculty of Medical Sciences and first author of the study. “Its growing international recognition has put hikikomori into the purview of many researchers and medical professionals, especially on the heels of the years long COVID-19 pandemic. Just this year, Hikikomori was recognized in the revised edition of the DSM-5.”

Kato and his team have been working on measures to evaluate, identify, and treat hikikomori patients, to the point of opening the world’s first outpatient clinic for hikikomori individuals in 2013. In 2018, the team developed the ‘Hikikomori Questionnaire,’ or HQ-25, that was design to assess whether individuals under social withdrawal after six months are symptomatic of hikikomori.

The new Hikikomori Questionnaire, or HQ-25M—made in collaboration with Nihon University and Oregon Health and Science University—is composed of 25 questions that evaluate the three subfactors of socialization, isolation, and emotional support on a scale to 0–4, 4 being ‘strongly agree.’

For example, questions such as ‘I feel uncomfortable around other people’ gauge socialization, while ‘there are few people I can discuss important issues with’ covers emotional support.

“We analyzed the data to see any comparable differences between the different category groups,” explains Kato. “Multiple models showed us that hikikomori groups scored significantly higher on all metrics compared to non- and pre-hikikomori.”

Interestingly, between the pre- and non-hikikomori respondents, of all the three subfactors that were measured, the isolation subfactor was the only one that showed a significant difference in scores.

While still preliminary, the team is pleased with their initial findings and plans to use them to improve their questionnaire and data collecting.