Children spending hours a day in front of screens are at risk of ‘short-sightedness, obesity and CANCER’

Spending too much time gawping at screens is making children more likely to be short-sighted, become overweight and get cancer, experts say.

A review of 80 studies on more than 200,000 people has ranked smartphones and tablets alongside sugary drinks as one of the biggest risks for childhood obesity.

Being overweight can lead to a dozen types of cancer, including breast, colon, kidney, liver, ovarian, pancreas and prostate.

As well increasing their risk of dying young, too much time on gadgets is damaging youngsters’ eyes – the number of short-sighted children has doubled in 50 years.

Researchers say the findings are a ‘significant concern’ and call for more control on junk food adverts, which worsen the effects of children doing less exercise. 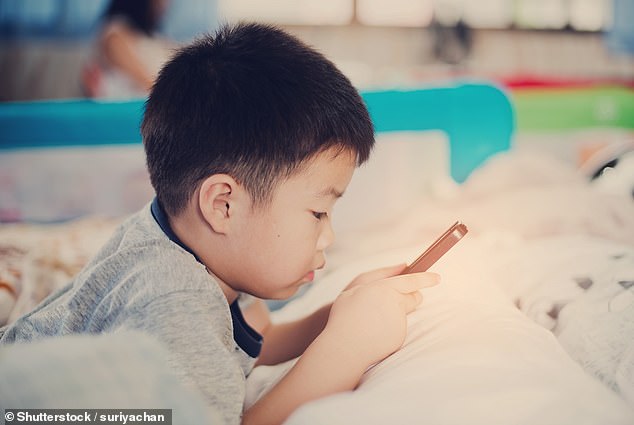 Every extra hour a day spent on a gadget raises a child’s risk of becoming short-sighted by three per cent, according to research by King’s College London

Research done by the World Cancer Research Fund examined the causes of weight gain in children around the world.

It found increasing amounts of time spent on smartphones, tablets and gaming is a big driver of children getting fatter – that and sugary drinks make up the top two.

‘Obese children are five times more likely to be obese as an adult, which is worrying because then they’ll be at an increased risk of different types of cancer.

‘That’s why it’s vital we see a 9pm watershed on junk food adverts on TV and similar protection for children viewing adverts on-demand and online.’

They call this ‘passive over-consumption’ – meaning children snack on junk foods which they often see advertised on the same devices they’re spending their time.

In addition to the obesity and cancer risks, spending too much time in front of screens also increase the number of children with myopia – short-sightedness.

The proportion of children worldwide with short-sightedness has more than doubled from 7.2 per cent to 16.4 per cent in the past 40 years.

This effect has been dubbed ‘digital myopia’, and King’s College London researchers, in a separate study, found every hour a day spent on devices raised a child’s risk of sight damage by three per cent.

Professor Chris Hammond, from King’s College, told The Telegraph: ‘I think it is a significant concern.

‘We do believe that young children staying indoors and spending hours on screens is bad for eyesight, not to mention obesity and fitness.

‘I think our concept in myopia is clearly that close work is a risk factor, and outdoor activity is protective.’

Eye expert Dr Mohamed Dirani wrote in the British Journal of Opthamology: ‘The age of smart device uptake is getting younger, with many two-year-olds spending up to two hours a day on devices.

‘The use and misuse of smart devices, particularly in our paediatric populations, must be closely monitored to address the emerging phenomenon of digital myopia.’

Children born in the summer are nearly twice as likely to become short-sighted than those born in the autumn, winter or spring, scientists have found.

By the age of 17 a quarter of the participants had developed myopia – the medical term for short-sightedness.

But those who had been born in the summer term were 93 per cent more likely to be short sighted than those born in the rest of the year.

The researchers, whose study is published in the British Journal of Ophthalmology, believe this is because summer-born children start school at a younger age than other children.

This means they start reading, writing and other book-work earlier than other children, before their eyes have stopped developing.

The authors wrote: In the UK, children start school in the September of the academic year in which they turn five years.

‘In this study, children entering the educational system at a younger age – born in the summer months – had the highest odds of myopia.

‘We… propose the association may be attributable to early exposure to the educational system.’ The researchers also found children who spend hours playing computer games in their teenage years are more likely to need glasses.

But surprisingly, children born as a result of fertility treatment seemed to be protected against myopia, with those born via IVF 37 per cent less likely to be short-sighted.