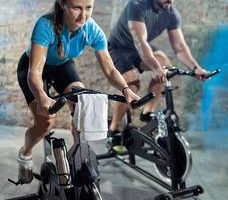 The rise of the life-changing power half-hour

The key to life, posits Will Freeman, indolent anti-hero of Nick Hornby’s About a Boy, “is to think of a day as units of time, each unit consisting of no more than 30 minutes”.

Full hours are intimidating, his theory goes, and most activities need to take just half that – an idea increasingly being adopted by high-powered CEOs and TV networks alike.

“Compressed time”, they purport, is a means of crunching the likes of gym classes and screen dramas into a mere 30 minutes; something that allows even the most time-pressed among us to engage in activities they might have otherwise eschewed for taking too long. Here are just some of the things you could achieve in a “power half-hour”…

If high-intensity interval training (HIIT) workouts first ushered in shorter class times, the trend has now truly taken off, with “express” classes springing up for those who want to do everything, exercise included, as efficiently as possible.

Boom Cycle’s 30-minute Shake and Ride lunchtime spin classes launched a few years ago: “I call it the Dirty 30 – you just go wild,” says Hilary Rowland, the studio co-founder. “You get as good a workout as you do in a 45-minute class… but you can be back at your desk with a protein shake in hand within the hour.” And there’s good news for the exercise-averse – even a 30-minute walk can lift symptoms of depression and improve mood, according to a study in the journal of the American College of Sports Medicine.

Peter Bregman, CEO of global management consultancy Bregman Partners, deems the “magic” of 30-minute meetings his “single most life-changing, business-transforming revelation”, crediting them with focusing minds, cutting waffle and getting decisions made quickly.

“I recommended the Pomodoro technique to two clients I worked with yesterday,” says productivity coach Clare Evans, meanwhile, of the time-management method developed by Francesco Cirillo in the late Eighties, which breaks tasks into 25-minute intervals separated by five-minute breaks. “There is research that shows our brains only really focus for a relatively short time, around 15-20 minutes anyway, and factoring in time to do nothing is just as important for creativity as being super productive,” says Evans, who divides her own week into half-hour chunks, a la Freeman: “I build in breaks, and clear emails in one half-hour chunk, make phone calls in another half-hour chunk, etc. It gives you a much better picture of what your day actually looks like.” A dose of culture

That a format traditionally reserved for comedies and kids’ shows is now being employed for serious dramas suggests that writers are getting better at pacing, or attention spans are waning. Either way, the half-hour window is also being embraced by high art: the Tate’s “30 Minutes On” free lunchtime tours in London feature artists, artworks and themes from the museum’s collection, which have often been historically ignored, forgotten or censored.

Meanwhile, a study by the Yale University School of Public Health suggests that those who read for 30 minutes a day live 23 months longer than those who don’t pick up a book at all.

Margaret Thatcher famously survived on just four hours’ sleep a night, but government files released this summer suggest she may have made up for it by catnapping in the back of her car (officials became so concerned she could suffer an injury if the Daimler was forced to brake while she was nodding off, they arranged for a custom-built headrest to be fitted to protect her neck).

Napping gets a bad rep, of course, not least at work, so Nick Littlehales, the elite sport coach who taught Cristiano Ronaldo how to kip while at Manchester United, has rebranded it a CRP (controlled recovery period), telling me it’s “the most powerful 30 minutes that anybody could ever wish to introduce into their day”.

For those who think they can’t achieve a short-term snooze, don’t fret – you don’t even need to sleep, just tap into that state of semi-consciousness where your mind wanders. And if anyone asks why your head’s on your desk, point them to the Nasa study that found a 26-minute nap can improve performance by 34pc, and alertness by more than half.