The prostheses that could alleviate amputees’ phantom limb pain 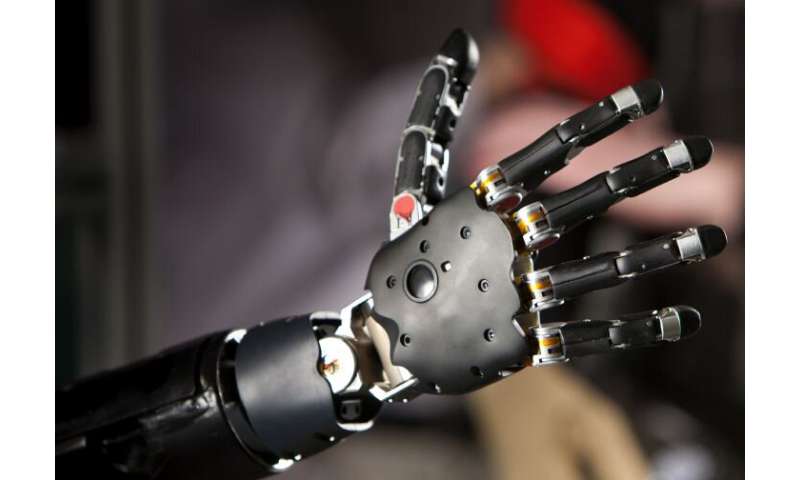 New prosthetic technologies that stimulate the nerves could pave the way for prostheses that feel like a natural part of the body and reduce the phantom limb pain commonly endured by amputees.

Silvestro Micera, a professor of translational neuroengineering at Ecole polytechnique fédérale de Lausanne in Switzerland, has spent the past 20 years figuring out how to make better prostheses for people with amputated limbs. He became interested in prostheses as a teenager.

“I loved comics and science fiction movies—things like Doctor Octopus from Spiderman,” he said. “In the beginning, it was the scientific interest of a teenager, but then it became an idea of helping people to get back what they’ve lost.”

A project that he led, called NEBIAS, developed a robotic hand that provides sensory feedback to the user. The technology behind it was ground-breaking—an implant positioned under the skin that connects to the person’s nerves. It transmits information from sensors in the hand by stimulating the nerves with electrical signals. This allows, for instance, a person to tell if an object they are holding is soft or hard.

Through a follow-up project called SensAgain, Prof. Micera worked to further develop the technology and take it to market.

“In five to ten years from now, the technology from NEBIAS is going to be provided to patients around the world,” he said.

To get the technology into practice as quickly as possible, he switched focus to developing prosthetic legs rather than hands, as leg amputations affect more people. Last year, he published a paper showing how sensory feedback in prosthetic legs can help people.

The users were able to walk better and move around in a less tiring and more confident way, says Prof. Micera. “If you’re walking better and faster, then you’re also able to reduce other effects, like back pain and cardiovascular disease,” he said.

To scale up this work, he set up a company called SensArs, being funded through a project called GOSAFE, with the aim of getting more evidence of the impact that the prosthesis makes on people’s lives.

“We showed that longer-term, like six months or more, the technology works,” he said. “The challenge is to go from a few patients for a few months to many patients for many years.”

With only a handful of people testing the prosthesis, it is difficult to draw broad conclusions, but the early signs have been encouraging.

“Very quickly, almost immediately, the subjects learn how to use this kind of prosthesis. They are able to exploit it in a very effective way. They get a very good embodiment, where they feel like the prosthesis is part of the body,” Prof. Micera said.

Making a prosthesis that feels like a part of a person is one of the biggest challenges for improving quality of life for amputees. Aside from the need to have sensory feedback, it is very complex to replicate the muscles that control a limb so that a prosthesis feels natural. In the hand alone, for instance, there are more than 30 individual muscles to control it.

Professor Giovanni Di Pino, from the Campus Bio-Medico University of Rome in Italy, is a neurophysiologist who worked with Prof. Micera previously. He is applying his expertise to study neural interfaces, the devices that connect directly to a person’s nerves.

“I want to try to understand how to develop a hand prosthesis that feels like part of the body,” said Prof. Di Pino.

Some commercial prosthetic hands are controlled through electrodes placed on the skin. These can detect the stimulation of specific muscles, which the person uses to manipulate the prosthesis. However, Prof. Di Pino says that many upper limb amputees are unhappy with their prosthetic hand, as it does not feel like a part of their body.

Prof. Di Pino is running a project called RESHAPE, which is testing new ways to connect a controllable hand to the body. The ultimate goal is for the amputee to feel complete, and this comes back to how the body is represented in the mind.

“The image of the body is like a map in our brain,” said Prof. Di Pino. “We are going to describe the representation of the hand.”

Prof. Di Pino is using brain scans to understand how the neural connections change when the person is trying to move their missing hand.

These connections and representations could be significant to help reduce the impact of phantom limb pain. This is a phenomenon where amputees can feel, sometimes very intense, pain that appears to come from their missing limb.

“Phantom limb pain is extremely common in upper limb amputees,” Prof. Di Pino said. “The subject is in pain because he cannot feel the hand, but he or she can feel the cortex that used to feel the hand.”

The connections in the brain that used to control the hand and sense pain are still there, but now they are not receiving the same sensory feedback. In one of the subjects of his study, Prof. Di Pino found that using interface implants helped reduce phantom limb pain.

The advances made through these research projects will still take many years before they can help improve prostheses. However, the insights and technology developed could have a much broader impact.

“Many years ago, someone asked me “why do you want to work on a niche like prostheses?”,” Prof. Micera said. “Now I think I can show why, because if the technology works for sensory feedback in the nervous system, then you can use it for many things: blind people, paralysed people, diabetic patients and many others.”

His team is already developing their technology to restore sight in blind people by stimulating the optic nerve. “We are also planning to apply it to restoring motor function in tetraplegic patients with spinal cord injury,” he said.