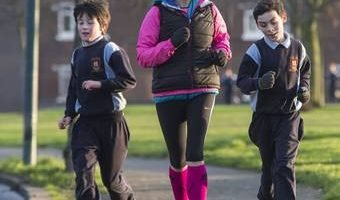 Every day just before 9am, pupils at St Brendan’s Primary School in Artane gather just opposite their school and set off on a walk, a run or a jog for 15 minutes before heading into class.

The 148 boys at St Brendan’s are among a growing wave sweeping the country called the ‘Daily Mile’ where children take time out of the school day to run or even walk a mile.

Nearly 400 schools from Cork to Donegal have adopted the Daily Mile, getting out into their yards or grounds every day. No special kit is required – children take part in their school clothes.

The Daily Mile was the brainchild of Scottish former primary school principal Elaine Wyllie. In February 2012 she asked a class of ten-year-olds to run round the school playing field. By halfway round most of them were exhausted and had to stop. They were completely unfit and they recognised it themselves, she says.

She sat down with the class teacher to see what could be done. The idea of running for 15 minutes every day was born. By the end of that spring term five classes in her school were doing the Daily Mile, with children going at their own pace.

“The improvements in the children’s physical health were obvious. We could have predicted that running daily would make them fit, but what we didn’t foresee were all the other important benefits to their mental, emotional and social health and wellbeing, which became apparent overtime,” says Elaine.

At St Brendan’s in Artane, Vice Principal Carol Howley, a mum of three boys, says this is borne out at her school. She says they are lucky that opposite the school is McAuley Park with a footpath on its perimeter. Locals call it the “miler” and it’s perfect for the kids to do their daily mile.

“We started with laps around the yard to build them up. Some were already sporty, but not all of them. Some of them have developed an interest in running as a result,” says Carol.

Every day at 10 minutes to nine, children file out of the school yard and do their 15 minute run or jog on the miler. On cold days the children wear hats. If it’s raining, they don’t go, but if there’s a dry spell during a rainy day they’ll fit it in somewhere.

While Carol says she’s not a runner outside school, the Daily Mile has brought more energy into her day and she can see the effects in the kids. “They’re energised and it’s good energy. They’re focused and ready for the day,” she says.

The school is seeing other benefits as well. At the moment children in Carol’s fourth class are running to London – clocking up the miles that it would take to get there and doing a project based on that.

“Some kids never thought they’d be good at running as some wouldn’t be sporty, but they’ve found they have a natural ability to run and they’re building it up. They’re really focused on it,” says Carol.

Former editor of Irish Runner magazine, Frank Greally has joined forces with Athletics Ireland as roving ambassador for the Daily Mile and says he’s determined to put more Irish schools on the map.

He describes it as a programme of attraction and says it spreads naturally because one teacher or one school takes it on and others are interested, hear about the benefits and want to join in.

“The simplicity of the programme is what makes it work. What we were hearing back from teachers is if you impose too much paperwork it won’t work. The programme basically gets the kids to walk or run for 15 minutes every day.

“Some children start walking and end up jogging and then they run. It brings a great sense of energy to the school and the results manifest themselves very quickly. Schools are seeing changes in only a few weeks,” says Frank.

At Dublin City University, head of the school of health and human performance, Professor Niall Moyna, says the health benefits of walking or running a mile every day are enormous for children.

He says kids’ participation in sports and exercise is nowhere near where it should be, with a recent study showing that only one in five 10 to 12 year-olds in this country was getting the recommended amount of physical exercise in their lives.

Children, he says, need 60 minutes of moderate to vigorous activity a day. This can be achieved by brisk walking or playing on a green.

It doesn’t have to be done all at once, but can be accumulated over the day which is why he believes having 15 minutes to walk or run in school is a great idea.

“There are health problems right now. Kids are not meeting the exercise requirements. They are being exposed to risks of non-communicable diseases like heart disease and diabetes much earlier than other generations”.

Prof Moyna says children adapt their health behaviours early on. “We are seeing them become more sedentary and these are behaviours they are taking with them,” he says.

But with daily exercise children will reap the benefits of reduced risk of obesity, improved sleep, better self-esteem as well as having better attention span in the classroom, he explains.

While he says not all children will be able to run or jog a mile to start with, they can gradually build it up or start with relays. “There’s nothing more important for a child than their health,” he says.

Olympic hopeful Seán Hehir, who is a teacher at Scoil Mhuire Gan Smál in Inchicore, says they adopted the Daily Mile in September. Classes taking part are staggered so there’s no congestion in the school yard.

He explains that once a school signs up for the Daily Mile there are resources online for teachers to do a risk assessment and make the yard, or wherever children will do the Daily Mile, as safe as possible.

At their school in Inchicore they sometimes use the church grounds next door and do their Daily Mile on what’s known as the rosary walk.

“The feedback we’re getting is that the children love it. You could hear them talking among themselves about how they were going to be so much fitter.

The fantastic thing is once I brought this to the staff on our first day back everyone was keen to take it on. It’s become part of the school culture,” says Seán.

And there are very few days that the weather means they don’t get to do their Daily Mile. “You can see when the students come back in they are more energised. They are refreshed and they come into the classroom more receptive to learning,” he says.

As a long distance runner who will begin his push to qualify for the Olympic Marathon in the New Year, Seán knows that running is also a social activity. While some children are keen to get the heads down and run the Daily Mile, others like to jog and talk with their friends. “I know how good the opportunity of running with friends is. It’s a great outlet,” he says.

And it’s not just the kids who are taking to running with gusto at the school. In the staffroom five teachers have signed up for the Dublin Marathon next year.