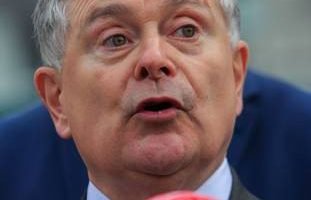 Taoiseach 'regrets his tone' over 'bodies on trolleys' row

Two families have now contacted University Hospital Waterford with concerns arising out of revelations about bodies being placed on hospital corridors at its mortuary.

A spokeswoman for the hospital said yesterday it never comments on individual cases.

But it can “confirm that to date it has received queries from the two families relating to two different cases.

“The hospital is currently engaging with the families concerned,” she added.

The revelation comes after a week both the south and south west hospital group, as well as Taoiseach Leo Varadkar, said there was “no evidence” to substantiate the claims made by pathologists.

The pathologists warned of cramped conditions in the mortuary, a lack of temperature control and in some cases leaking bodies in the corridor.

However, the Taoiseach said yesterday he “regrets the tone” of comments that cast doubt on the standard of mortuary services at Waterford University Hospital.

As controversy continued about Mr Varadkar’s comments, he said yesterday he never specifically challenged the views of four pathologists at the hospital.

On Tuesday in Waterford, Mr Varadkar said he was not sure if these claims were true – and also said to there was “no evidence” to support them.

The Taoiseach was replying to questions as he launched Fine Gael’s local and European election campaigns in Moate, Co Westmeath.

He did not withdraw the earlier remarks – but he conceded there were differing accounts and he had no reason to doubt the truth of any of these versions of events.

“The only thing I said was there were different accounts, and I did not want to be calling any staff member dishonest or questioning the veracity of what they said.”

Labour leader and former cabinet colleague Brendan Howlin accused the Taoiseach of “Trumpian tactics” in dealing with issues he did not like.

Fianna Fáil leader Micheál Martin said the Taoiseach’s comments militated against developing against a culture of openness in the health services.

The Taoiseach said it was universally accepted the morgue facilities needed to be upgraded as they was substandard. He argued he had always encouraged people to be open and honest.

“If that is the tone that I struck, or it came across that way, I regret that. I have always encouraged people to raise issues if they have issues,” he said.

The hospital spokeswoman said that it “always takes complaints very seriously and have very clear guidelines and protocols regarding the investigation and management of complaints, including liaison with the individual making the complaint”.

It is a hospice friendly hospital, and wanted to reassure the public that all deceased patients “are treated with respect and dignity”.

The mortuary was deemed “unfit for purpose” as far back as 2004.

A response by the chief executive of the hospital group, Gerry O’Dwyer, six weeks ago said he had asked the HSE’s new assistant national director of estates, Mark Kane, to visit the current facilities and discuss the pathologists’ “ongoing concerns”.

Another follow-up letter to Mr O’Dwyer by the four pathologists reiterated “the appalling lack of dignity afforded to deceased patients due to the conditions of the mortuary facilities” at Waterford. It said that “body storage on the floor of the mortuary” was required for the first time recently because of a “surge in activity”.

The hospital has said it is providing a mobile mortuary facility while the plan is to build a new building after it goes to construction tender.