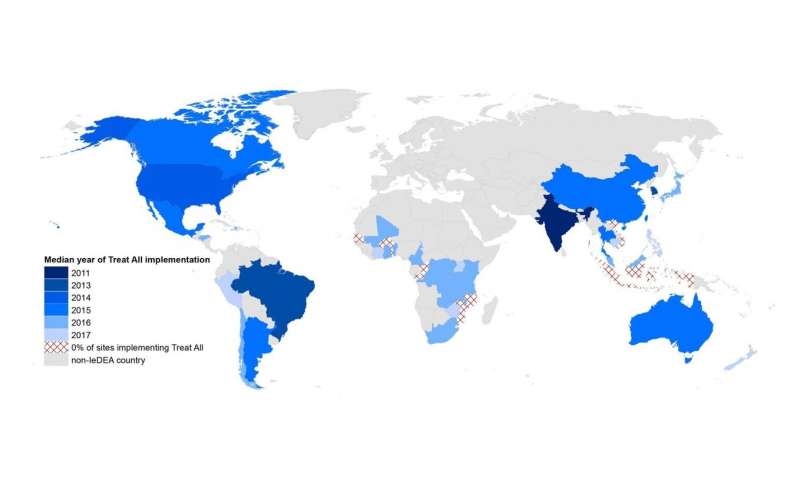 A new study published in the Journal of the International AIDS Society shows that the World Health Organization’s (WHO) 2015 recommendation for immediate treatment of all people living with HIV has become the standard of care across HIV clinics in countries around the world. While most countries have adopted the WHO’s “Treat All” recommendation, the extent to which these guidelines had been translated into practice at HIV clinics around the world was previously unknown.

Based on a survey conducted at more than 200 HIV care and treatment sites in the 41 countries that participate in the International epidemiology Databases to Evaluate AIDS (IeDEA) research consortium, this study found that site-level uptake of the Treat All practice is almost universal. While studies of prior changes in HIV treatment guidelines had shown delays in implementation, this study found the roll-out of Treat All practices has been rapid, with a median lag of one month between national policy change and site-level introduction. The study also found that sites in low- and lower-middle income countries generally initiate patients on HIV treatment within 14 days of confirming HIV diagnoses. The study found no significant differences in introduction of Treat All at the service delivery level by geographic region, country income level, urban/rural location or other facility characteristic, which suggests that gaps in treatment access have narrowed. However, the study also found that the majority of HIV care and treatment sites in low-resource settings do not have the capacity for routine viral load monitoring once a patient starts HIV treatment.

The study was led by researchers at the CUNY Institute for Implementation Science in Population Health (ISPH) at the CUNY Graduate School of Public Health and Health Policy (CUNY SPH).

“These findings are promising, in terms of the ability to broadly improve access to earlier treatment in low-resource settings, which will improve health outcomes among people living with HIV and prevent new infections,” said Ellen Brazier, the study’s lead author.

Dr. Denis Nash, distinguished professor of epidemiology at CUNY SPH and the study’s senior author, noted that widescale and rapid introduction of Treat All at the service delivery level may reflect the fact that its guidelines are simpler to implement in low resource settings than prior guidelines, which required assessing each patient’s immune status to determine if they were eligible to start HIV treatment. However, he cautioned that limited capacity for laboratory testing remains a concern.