Student, 26, has had FOUR hip replacements due to a rare disorder

‘I have already faced more health challenges than most will in their entire life’: Father, 26, has had FOUR hip replacements due to a rare disorder that ‘eats away at his bone’

A father-of-one had his fourth hip replacement at just 24 because of a rare disorder that eats away at his bone.

Aaron Blocker, 26, from Mississippi, was diagnosed with avascular necrosis in 2010, which causes his bone tissue to die due to a poor blood supply.

Mr Blocker, who also has Crohn’s disease, had his first hip replacement two years later at just 20, when the pain of walking became unbearable.

With the replacement meant to last up to 20 years, doctors were baffled when Mr Blocker needed surgery again shortly after.

He was later diagnosed with the genetic disorder hypophosphatasia, which weakens his bones and is thought to have triggered his necrosis.

Despite battling constant pain and relying on crutches to get about, Mr Blocker is proud of what he has achieved, from welcoming baby Jude earlier this year with his wife Emily to pursuing a career in microbiology research.

‘I have always tried to live in spite of my disease and show that even though I have faced more health challenges in my 26 years of life than most people will in their entire life, I can still pursue my dreams and accomplish a lot,’ he said. 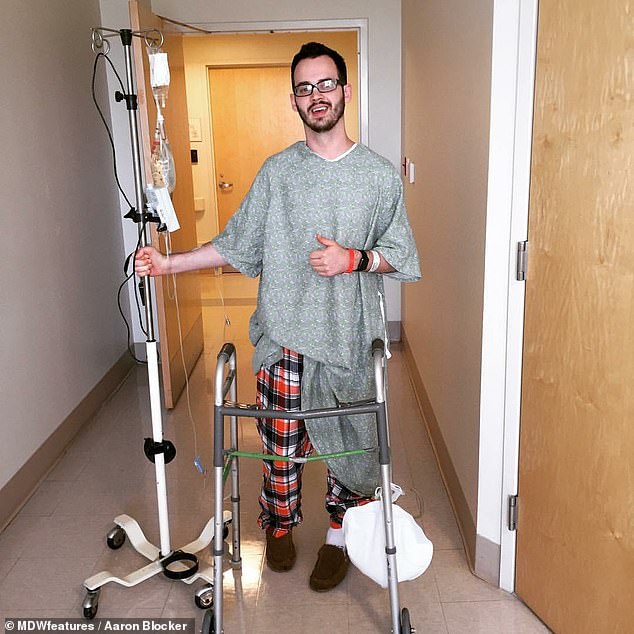 Aaron Blocker had his fourth hip replacement at just 24 due to a rare disorder that ‘eats away at his bone’. Pictured after the procedure in July 2016, Mr Blocker, now 26, was diagnosed with avascular necrosis in 2010, which causes his bone tissue to die due to a poor blood supply 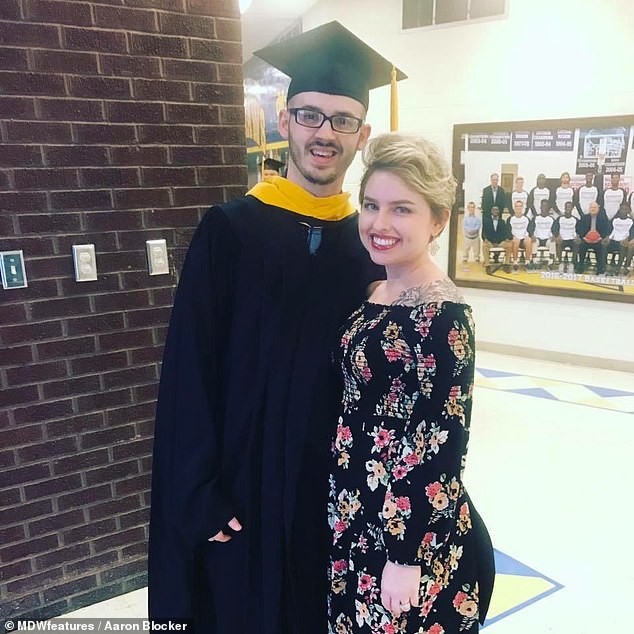 Since having the procedures, Mr Blocker still struggles to walk without crutches and battles pain every day. But despite his health challenges, the father-of-one is keen to pursue a career in microbiology research and is pictured on his Graduation day with his wife Emily 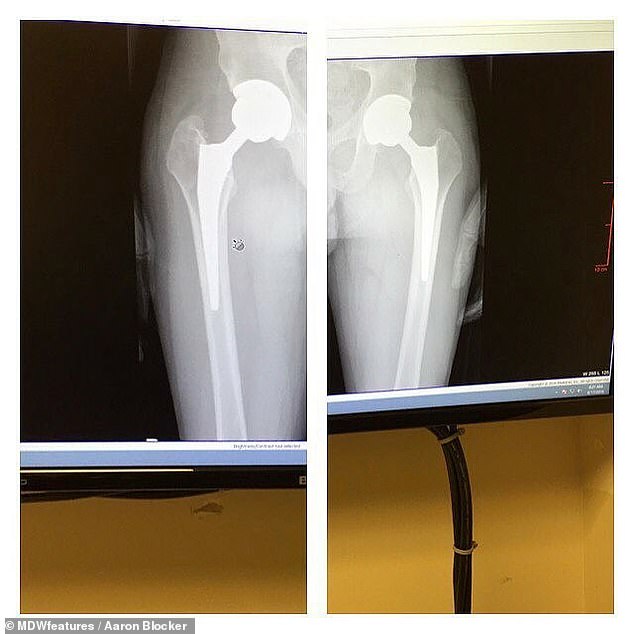 X-ray shows his unaligned hips, which were causing him pain and prompted the surgery

Avascular necrosis’ prevalence is unclear and is thought to vary depending on the site affected, with the hip being most common. Studies in Japan, home to around 120million people, have found between 2,500 and 3,300 cases occur a year in the hip. It is unclear how rare the condition is in the UK or US.

Severe hypophosphatasia affects around one in every 100,000 in the US. Its prevalence in the UK is unclear.

‘Before surgery I had horrible pain, couldn’t walk well. I was on crutches and wore leg braces on and until the surgery,’ Mr Blocker said.

‘I was 20 years old and told I needed my hips replaced. It’s a surgery people typically don’t need until much later in life, so I was devastated.’

Mr Blocker went under the knife for the first time in September 2012 and spent five days in hospital.

‘The surgery really helped – I didn’t realise how bad they had become until I could barely walk and realised it needed replacing,’ he said.

His first hip replacement was meant to last between 15 and 20 years, however, doctors were unaware at the time Mr Blocker was suffering from hypophosphatasia, which degrades his hips.

‘Hip replacements generally don’t last terribly long. I was told my initial replacements might last 15-to-20 years, but back then we didn’t know I had a rare bone disease, so they only lasted for three years,’ he said.

WHAT ARE MR BLOCKER’S CONDITIONS?

Avascular necrosis is the death of bone tissue due to poor blood supply.

It can lead to tiny breaks in the bone, which eventually collapses.

Causes can include a broken bone, dislocated joint, long-term steroid use or alcohol abuse, fatty deposits in blood vessels, or certain diseases, such as sickle cell anaemia.

Gradual pain is the main symptom, which may be worse when weight is put on a joint.

Treatment can include anti-inflammatory drugs, blood thinners or osteoporosis medication.

A bone transplant, reshaping or joint replacement may be required in extreme cases.

Hypophosphatasia is a genetic disorder that causes the abnormal development of the bones and teeth due to poor mineralisation.

This occurs due to a genetic mutation that makes bones weak.

Symptoms vary greatly but can include tooth loss and soft bones that are prone to fracture.

He told MailOnline: ‘[My hips] were too weak to keep my implants in place so they shifted and I dislocated both of my prosthetic hips.’

Mr Blocker was then forced to undergo a second hip replacement in December 2012 and stayed in hospital for ten days due to a wound infection.

Once recovered, Mr Blocker’s ordeal was far from over, with him soon requiring additional surgery in March 2016 and July that same year.

‘Once [my hips] dislocated I ran the risk of dislocating them again,’ he told MailOnline.

‘They were already failing so the sooner we could get them replaced the better.

‘When I was told I needed both hips replaced again, after only three and a half years I was even more devastated because I was only 24 – I knew I needed it because of the problems I had, but it was tough.

‘I sat in my car after my appointment and cried to myself. Since I was only 24 when I had my second round of replacements, even if I get 20 years out of them, I would still need them replaced again later in life.’

Mr Blocker even found it a ‘relief’ when doctors finally discovered what was causing his bones to deteriorate.

‘Hypophosphatasia contributed to me developing avascular necrosis which meant I needed so many hip replacements.

‘Getting the hypophosphatasia diagnosis was a bit of relief in hindsight honestly. I have had bone problems since I was born so the diagnosis, although it was scary, it was a relief to us all to finally understand the issue.

‘With my bones being so bad, there’s always a chance I may need surgery here and there. It’s just a fact of living with my diseases.’ 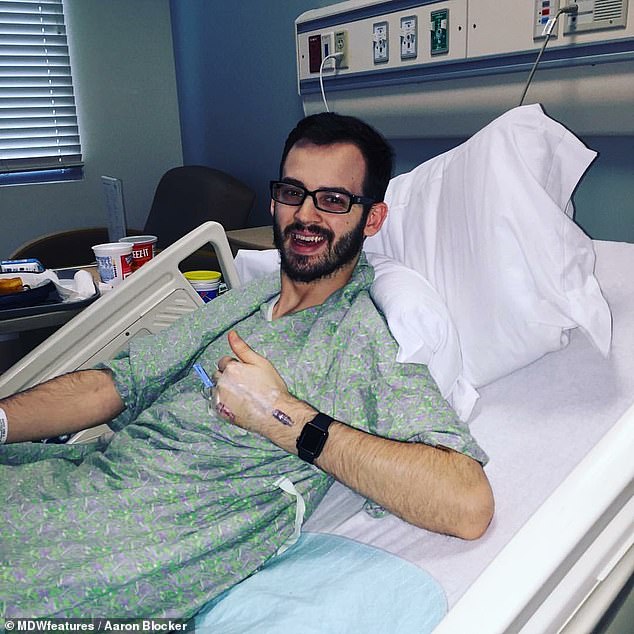 Pictured in hospital before his fourth hip replacement, doctors were initially baffled why Mr Blocker’s first replacement was so short lived. They later discovered he had the genetic disorder hypophosphatasia, which was causing his necrosis 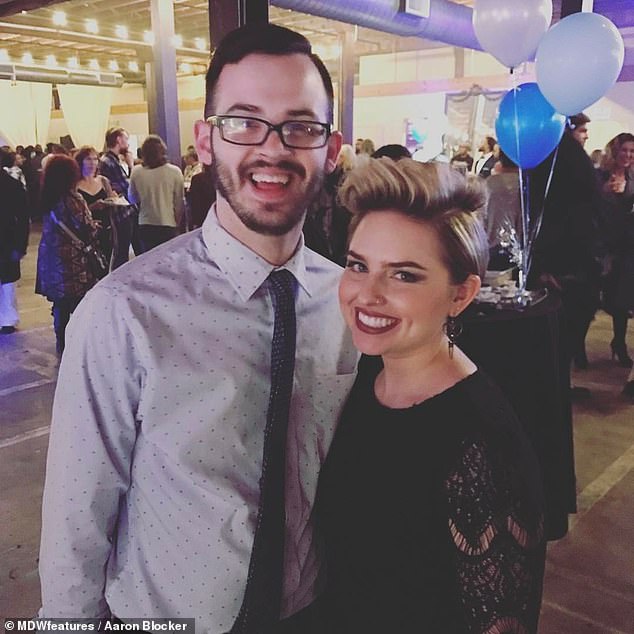 Pictured with Emily, Mr Blocker works hard to remain positive despite facing ‘more health challenges in my 26 years of life than most people will in their entire life’ 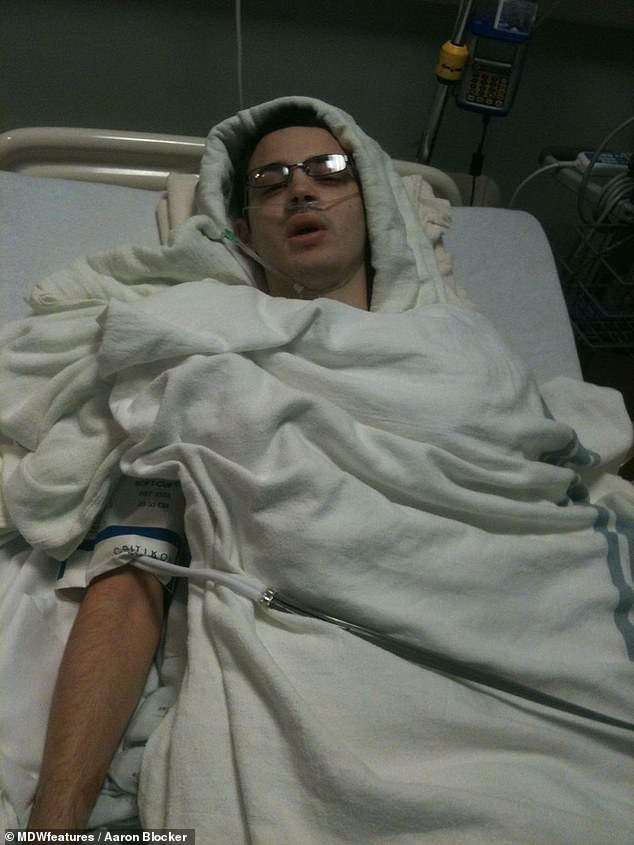 Pictured after one of his surgeries, he has accepted he may face many more operations 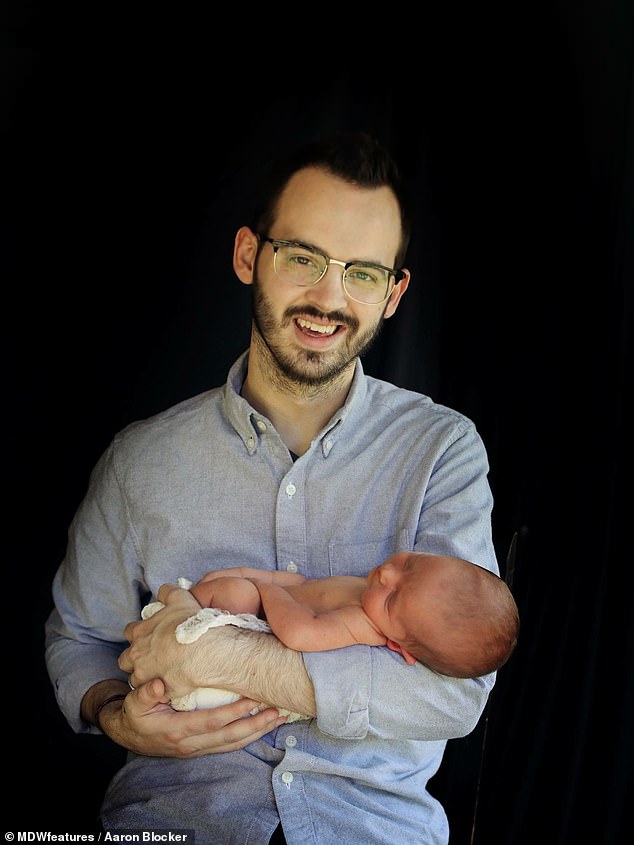 Despite spending much of his time on crutches, Mr Blocker remains positive and hopes to redefine the idea of a ‘normal’ life.

‘I want to be honest and open by telling people that it’s not easy. I have to put in so much extra work to work around my disease and to know my limits,’ he said.

‘So many people are shocked when they learn that I have had hip replacements so young. I have had some people not even believe me until I showed them proof.

‘My rare disease impacts my energy levels, causes pain and limitations, but having four hip replacements means you can never go back to “normal”.

‘I can’t run, can’t squat and I have muscle problems in my legs from surgery, so it’s been tough. I still have a normal life and I can do a lot of stuff, but I do have limitations which will always be present.’ 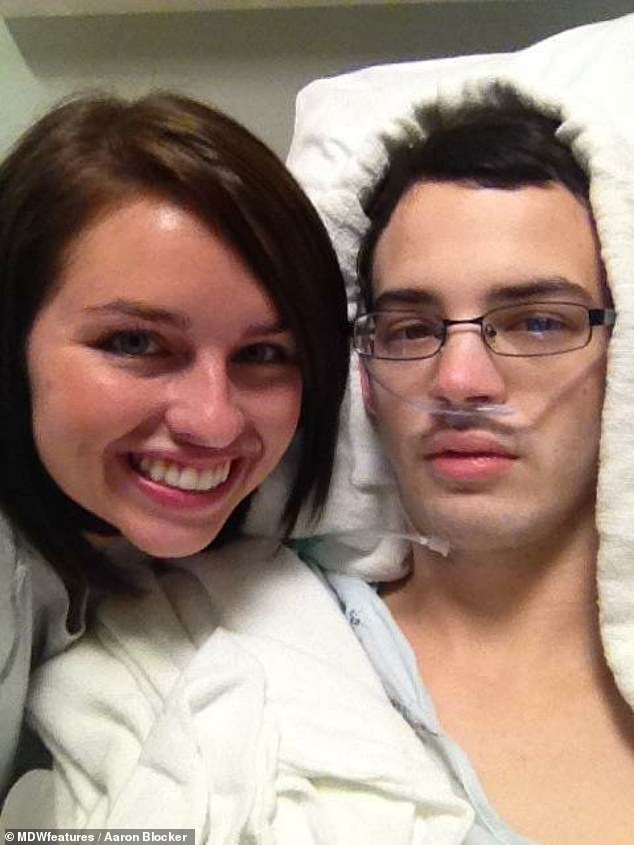 Pictured after one of his hip replacements with Emily, Mr Blockers admit the surgery ‘really helps’ and enables him to walk properly, however, he still cried when he discovered he would face further procedures in his 20s alone and potentially many more throughout his life 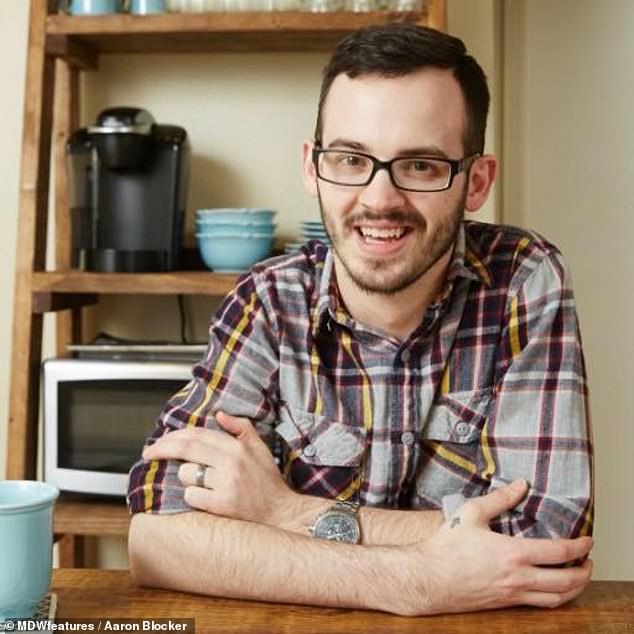 Mr Blocker claims he has to put in ‘much extra work’ because of his diseases, which he plans his life around. His conditions mean he cannot run, battles daily pain and has low energy levels 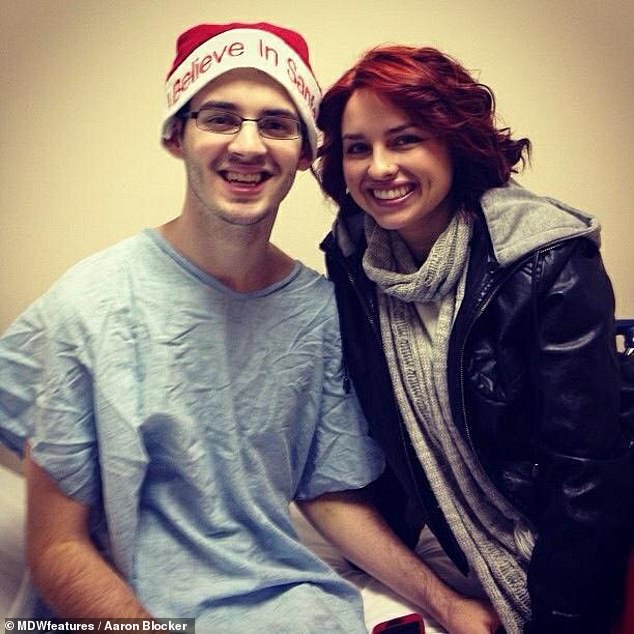