Speaking releases much more SARS-CoV-2 virus than breathing does

In a recent study published in the journal PNAS, researchers at the U.S. National Institute of Diabetes and Digestive and Kidney Diseases (NIDDK) monitored the airborne mass of speech-generated aerosols using an alternative experimental approach that addressed issues arising from nucleated condensation. Hybrid measurements of the coarse fraction of speech-generated aerosols, with a diameter (D) larger than five micrometers (μm), revealed that they remained airborne for a few minutes, not hours. However, due to their high volumes, and airborne life, they likely dominated the transmission of respiratory diseases, including coronavirus disease 2019 (COVID-19). 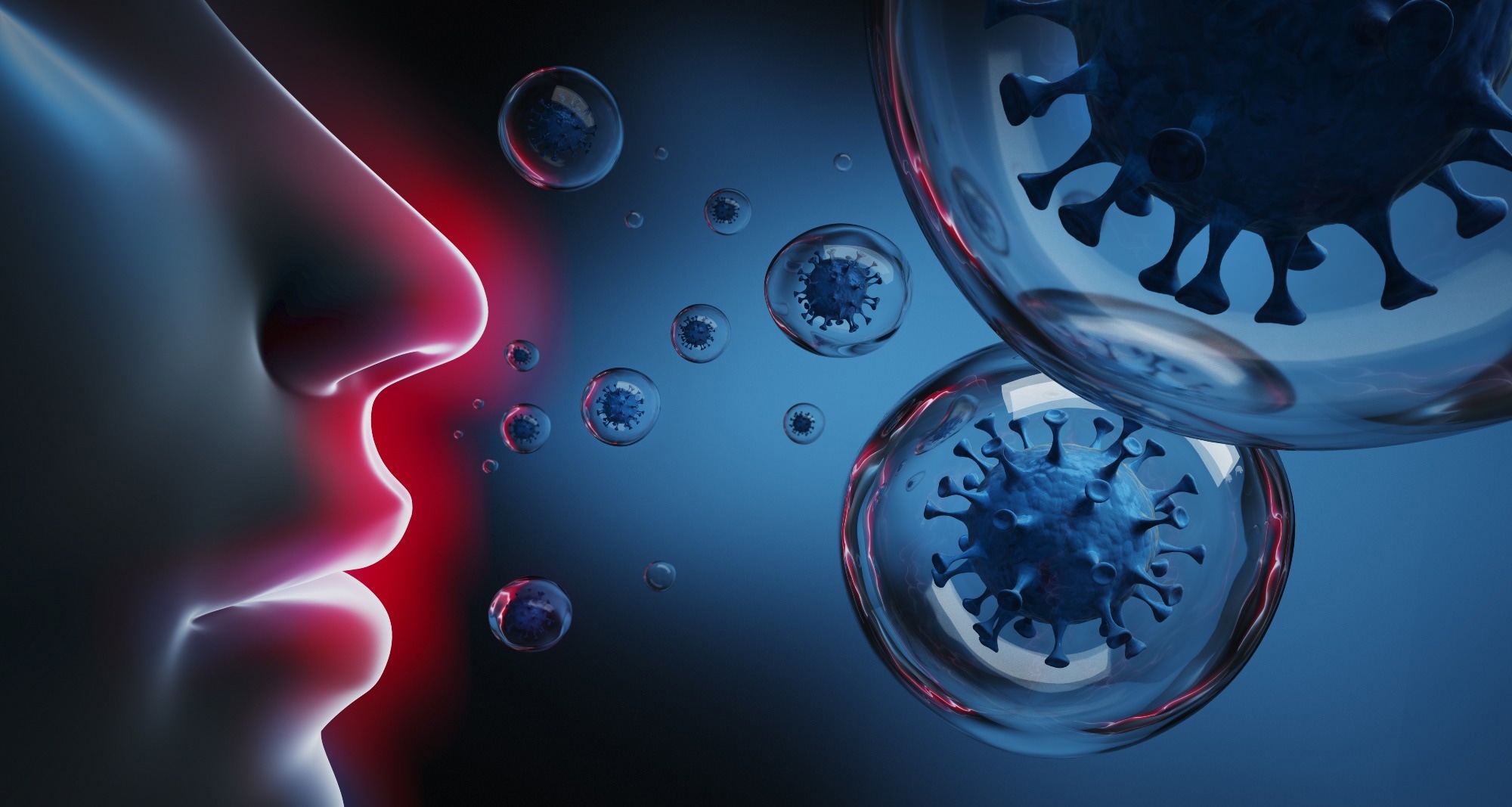 Quantitative modeling of airborne severe acute respiratory syndrome coronavirus 2 (SARS-CoV-2) transmission requires a proper understanding of the number and size distributions of respiratory droplets in different environments. Additionally, it is crucial for appropriate COVID-19 mitigation strategies and to evaluate the relative SARS-CoV-2 transmission by saliva vs. airway lining fluid-originated droplets.

For larger particles, the team used video analysis of laser light scattering and optical particle sizers (OPSs) and aerodynamic particle sizers (APSs) to quantify smaller respiratory droplets. Video recording of light scattered by expired air measures breath droplets in very large numbers (>105 per liter). Therefore, the researchers entered all respiratory droplets directly into a low-humidity chamber, wherein droplets with D ≳80 μm, did not fully dehydrate and sedimented within seconds. Next, they viewed these larger droplets sized based on their Stokes sedimentation velocity by laser light scattering and used OPS to measure their numbers, sizes, and settling rates.

According to the authors, many previous studies have underscored the quantity of speech aerosol, especially those greater than 4μm. However, the hybrid measurements of the present study revealed that a large fraction of speech-generated coarse aerosol had an intermediate size between 5 to 20μm diameter. This aerosol remained airborne for minutes but was too large to penetrate the LRT directly. 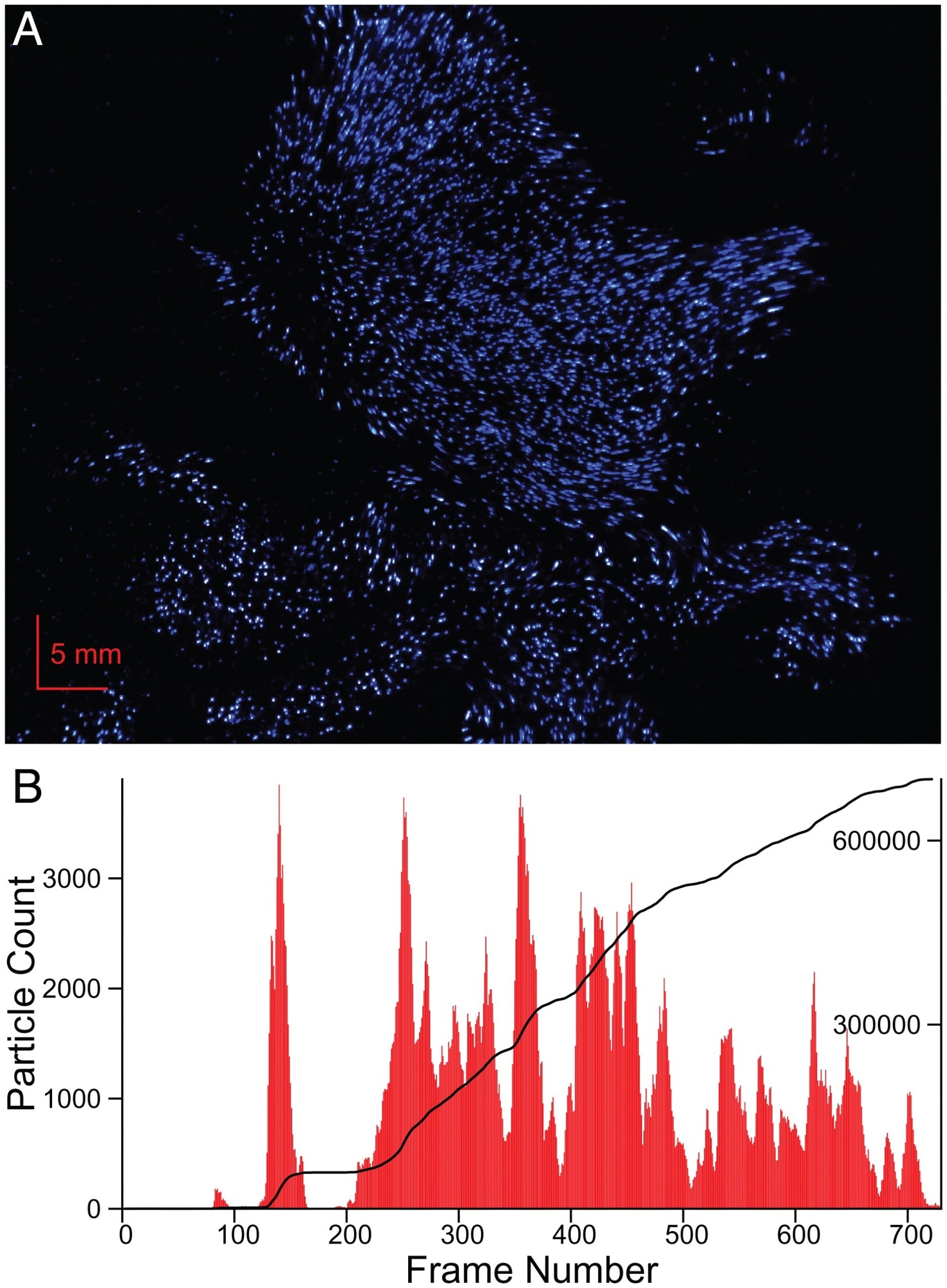 Video recording of laser light scattered by breath droplets. (A) Single frame of a 120-fps video recording of exhaled breath, crossing a 0.7-mm-thick sheet of blue laser light. Particles have undergone nucleated condensation, resulting in droplet sizes of ca. 1 to 2 μm. (B) Particle count as a function of frame number. The integral of the number is depicted by the solid black line, with the scale marked on the right side. Because the sheet crossing time (ca. 3 ms) is shorter than the duration of a single frame, very few droplets are visible in consecutive frames. The video is available at https://doi.org/10.5281/zenodo.6131524.

The study had several other important findings. First, in agreement with the observation that most SARS-CoV-2 infections start in the URT, the authors noted that the airborne mass of coarse speech aerosol was around two times in magnitude of the fine aerosol, therefore, it could not penetrate the LRT.

Second, they observed that the SARS-CoV-2-containing breath aerosol of hospitalized COVID-19 patients with viral pneumonia was smaller than 5μm. Medical personnel were at risk of becoming infected with COVID-19 and most likely to die during the first phase of the pandemic when they did not have access to high-quality respirators. More importantly, the study analysis revealed that even though breathing is a continuous activity, speaking a few words per hour generates far more aerosol mass than breathing.

Furthermore, the authors noted that breath particles originate in the lungs of an infected individual and contain a viable virus only if the infection involves the LRT. Therefore, asymptomatic SARS-CoV-2 transmission involves carriers with the URT infections. Speaking generates more virus-containing aerosols transportable over farther distances in jet-like flows before finally dispersing in the atmosphere. Therefore, studies have documented more SARS-CoV-2 superspreader events in bars, conferences, and restaurants, and none in libraries and movie theaters.

Another important observation was that increased ventilation is one of the most effective ways to reduce the concentration of speech and breath aerosols that poses the highest risk of severe disease. However, the rapid gravitational sedimentation of coarse aerosol makes it challenging to mitigate SARS-CoV-2 transmission by increased ventilation.

Overall, the study demonstrated that in the absence of COVID-19 symptoms such as coughing and sneezing, speech-originated aerosols actively transmit respiratory diseases, including COVID-19. However, new research should expand these findings to obtain a better quantitative understanding of speech aerosols generated in real-life settings.

Neha is a digital marketing professional based in Gurugram, India. She has a Master’s degree from the University of Rajasthan with a specialization in Biotechnology in 2008. She has experience in pre-clinical research as part of her research project in The Department of Toxicology at the prestigious Central Drug Research Institute (CDRI), Lucknow, India. She also holds a certification in C++ programming.