Only way to solve NHS staffing crisis is by paying nurses a ‘decent wage’, says union boss as it opens ballots for first EVER walk-out in its 100-year history

Giving nurses a ‘decent wage’ is the only way to stop nurses fleeing the NHS and plug thousands of vacancies, the head of the nursing union says.

Her comments come as the Royal College of Nursing (RCN) today launched its ballot for strike action, asking members across the UK to take industrial action on pay.

The 106-year-old union is demanding nurses receive a salary uplift of at least five per cent above inflation, which currently sits as 12.3 per cent.

She told BBC Radio 4’s Today programme: ‘Nurses will do nothing to add to the risk that patients are facing every single day as a consequence of not having those nurses in the system to look after them.’

‘We continue to provide critical services throughout any strike.’

But she insisted nurses are taking action to ‘save the health service’, adding they are currently ‘struggling to provide safe care for their patients’ due to a lack of staff. 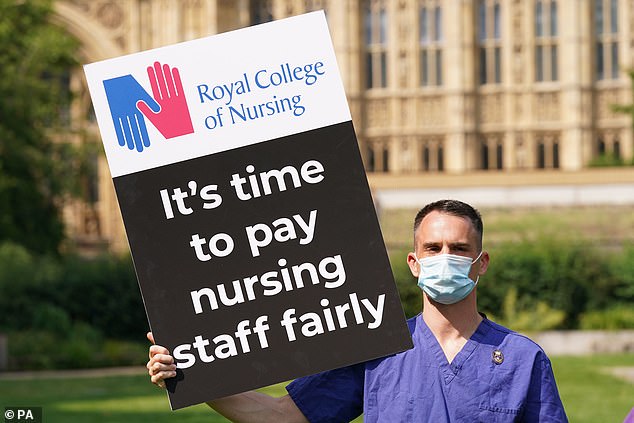 ‘Nurses have made every attempt to get Government to listen to the fact that there’s hundreds of thousands of nursing vacancies across this country and nurses are struggling to provide safe care for their patients,’ she said.

‘The only way that we’re going to address those vacancies and ensure that we recruit nurses into our health services and hold on to the brilliant services that we’ve got is if we pay them a decent wage.’

She said that if the Government failed to offer that, the NHS will continue to lose the nurses it desperately needs to stay.

‘If this Government does not address that, then our fear is that we’ll continue to lose the great nurses we’ve got,’ she said.

WHAT PARTS OF THE NHS COULD STRIKE?

The Royal College of Nursing (RCN) is urging its 300,000-plus members to vote in favour of strike action when ballots open next month.

The chair of the British Medical Association has warned strike action is ‘inevitable’.

The Royal College of Midwives will put putting industrial action to a vote to its 50,000 members.

Two-thirds have already said they would be willing to strike in a preliminary poll.

The Chartered Society of Physiotherapy (CSP) said more than eight in 10 of its 60,000 members are prepared to strike.

Members will be balloted for the first time in the CSP’s 100-year history over pay.

‘We’re losing thousands of nurses from our health service and that’s against a backdrop of thousands and thousands of vacancies.’

Ms Cullen added that Government’s offer of a near four per cent wage rise only ‘makes a difference to a nurse’s wage of 72p a week’.

Nurses will start voting on Thursday on whether to strike over pay, with 300,000 members asked to take part in the ballot.

The RCN said new analysis by London Economics to coincide with the ballot launch shows pay for nurses has declined at twice the rate of the private sector in the last decade.

Nurses’ real-terms earnings have fallen by 6% compared with 3.2% for private sector employees, it was found.

The ballot closes on November 2.

‘While I understand that people want a pay rise, that’s why, you know, the Government is driving its growth plan to ensure that Britain can get a pay rise,’ he said.

Labour leader Sir Keir Starmer has repeatedly said he does not want strikes to go ahead, though he added he understands why nurses are considering them.

He told BBC Radio Devon: ‘I completely understand why people are concerned and considering industrial action.’

‘But let me be clear… I don’t want these strikes to go ahead. The last thing that anybody who works in the NHS wants is to go on strike, what they need is a resolution of the issues.’

As part of its pay campaign the RCN is inviting members of the public to co-sign a letter to Prime Minister Liz Truss which says: ‘On behalf of the nursing profession, I implore you to see sense. Protect nursing to protect the public.’

The union said new polling carried out by YouGov showed support from two-thirds of the public for nurses taking strike action, while three-quarters of respondents said there are too few nurses to provide safe care in the NHS.

The trade union Unison is already balloting more than 50,000 health workers on strike action, while the Royal College of Midwives in Scotland opened its ballot last month.

Scottish Health Secretary Humza Yousaf has promised NHS staff he will make a ‘significantly improved’ offer after the record 5 per cent pay rise put forward by his Government was rejected.

If the RCN strike action goes ahead, it will be first national industrial action by the union in its history.

It would be the second industrial action by nurses in the UK in recent years with, thousands of nurses in Northern Ireland walking out over pay and staffing in late 2019 and 2020.

This was due to a Northern Ireland political crisis meaning nurses’ salaries had stagnated compared to their colleagues in the UK.

Northern Ireland’s Health and Social Care Board said 4,749 hospital appointments were cancelled as a result of the 2019 action.