Getting too much, or too little, sleep may be bad for your heart, a new study suggests.

The amount of time a person sleeps has been linked to their risk of cardiovascular disease and premature death.

The research, published in the European Heart Journal, examined data on 116,000 people aged between 35 and 70 from 21 different countries. 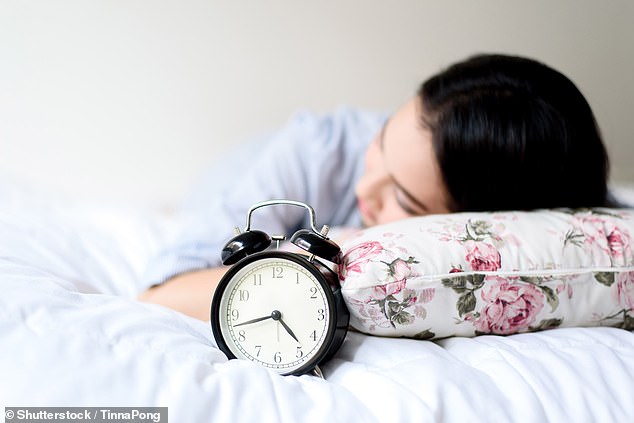 Sleeping too much, more than six to eight hours a day, raises the risk of cardiovascular disease and premature death, a study led by the Chinese Academy of Medical Sciences found

People who slept longer than eight hours had a higher risk of dying or developing diseases of the heart or blood vessels in the brain compared to those who slept for between six and eight hours.

‘Sleep is essential to human health, and people spend about a third of their hours sleeping.

‘It is increasingly regarded as an important lifestyle behaviour that can affect cardiovascular disease (CVD) and death,’ the team of international researchers wrote.

Compared to people who slept six to eight hours, those who slept a total of eight to nine hours a day had a five per cent increased risk.

The researchers also found a nine per cent increased risk for people who slept a total of six or fewer hours, but this finding was not statistically significant.

‘Our study shows that the optimal duration of estimated sleep is six to eight hours per day for adults,’ said lead author Chuangshi Wang, a PhD student at McMaster and Peking Union Medical College, Chinese Academy of Medical Sciences, China.

Co- author Professor Salim Yusuf, from McMaster University, Ontario, Canada, added: ‘The general public should ensure that they get about six to eight hours of sleep a day.

‘On the other hand, if you sleep too much regularly, say more than nine hours a day, then you may want to visit a doctor to check your overall health.

‘For doctors, including questions about the duration of sleep and daytime naps in the clinical histories of your patients may be helpful in identifying people at high risk of heart and blood vessel problems or death.’

HOW TO COPE WITH SLEEP PROBLEMS

Poor sleep can lead to worrying and worrying can lead to poor sleep, according to the mental-health charity Mind.

A lack of shut eye is considered a problem when it impacts on a person’s daily life.

As a result, they may feel anxious if they believe lack of sleep prevents them from rationalising their thoughts.

Insomnia is also associated with depression, psychosis and PTSD.

Establishing a sleep routine where you go to bed and get up at the same time every day can help a person spend less time in bed and more time asleep.

Having tech-free time an hour or so before bed can also prepare you for sleep.

If you still struggle to nod off, keeping a sleep diary where you record the hours you spend asleep and the quality of your shut eye on a scale of one to five can be a good thing to show your doctor.

Also note how many times you wake in the night, if you need to nap, if you have nightmares, your diet and your general mood.

Talking therapies can help your recongise unhelpful thought patterns that might affect sleep.

While medication, such as sleeping pills, can help break short periods of insomnia and help you return to better a sleeping pattern.