Sleep six hours or less? Why your risk of dementia may be higher

As far as the three pillars of health go – exercise, diet and sleep – it’s the last one that often gets neglected.

Health authorities recommend getting seven to nine hours a night to support everything from our mood and productivity to our weight and immune system. 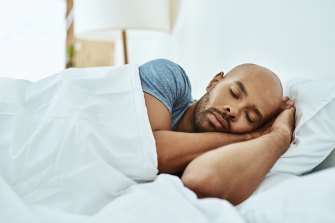 To protect your brain and help reduce your risk of dementia, prioritise your sleep.Credit:iStock

But there is another major reason to prioritise your shut-eye, with mounting evidence that poor sleep in midlife is linked to cognitive decline and dementia. A British study, published last month in Nature Communications, examined the health data of almost 8000 adults over 25 years and found there was a higher risk of later dementia among people who were sleeping six or fewer hours per night at age 50 or 60. The risk was deemed to be 30 per cent higher in those who consistently have short sleep from middle to older age compared to people who sleep seven hours a night, independent of major dementia risk factors such as mental illness and cardiovascular disease.

The research supports the findings of a smaller US study, published in Aging in February, which looked at 2800 people aged 65 and older over five years. It showed that those who had less than five hours’ sleep a night were twice as likely to develop dementia compared to those who got six to eight hours.

Professor Sharon Naismith, a clinical neuropsychologist at the University of Sydney’s Brain and Mind Centre, says the new research gives greater clarity on the relationship between sleep duration in midlife and the later risk of dementia.

What happens when we sleep

Naismith, who is also investigating the links between dementia and sleep, says sleep plays a protective role for our cognition, and the reason why poor sleep contributes to brain degeneration is thought to be because people miss out on important physiological processes.

The key one, Naismith explains, is that sleep brings into action the brain’s sewage system, flushing out toxins and harmful proteins associated with different types of dementia.

Among them is the protein beta-amyloid, a major hallmark of Alzheimer’s disease. It accumulates in our brain through the day but when we sleep, cells in the brain shrink, allowing room to wash away any unwanted substances.

So when someone is consistently not getting enough shut-eye, it’s possible that it leaves beta-amyloid proteins piling up in the brain, says Dementia Australia’s honorary medical adviser, Associate Professor Michael Woodward.

“It’s that accumulation of beta-amyloid over many years that puts us at increased risk of developing dementia,” says Woodward, head of Austin Health’s Memory Clinic.

“You must have a good pattern of lifestyle well before you’re getting into 70s and 80s.”

Naismith adds that the flushing happens during the really deep stages of sleep, so both the quality and the duration of sleep are important.

There are other crucial systems at play while asleep. As Naismith explains, it promotes the growth of neurotrophin proteins which help the brain generate new neurons, specifically in the hippocampus, which is key to memory.

Studies of disturbed sleep also show it can trigger inflammatory responses, Naismith says, which may affect the brain’s blood vessels and increase inflammation around the body (this, in turn, is associated with health issues such as heart disease and high blood pressure, linked to dementia).

When you sleep, your brain lays down your memories. So if you disrupt that process, there can also be huge implications for daily functioning.

Dealing with the risk

Woodward says that given all the processes associated with sleep, the risk can’t be ignored.

“I think we have to accept that it’s quite possible that if you are unfortunate enough to be one of those who lacks more than six hours of sleep in your 50s and 60s, then you may have an increased risk of developing dementia,” he says.

It may be concerning to hear, given most of us experience shifts in our sleep as we age; often, it becomes lighter and more fragmented. Sleep disorders become more common, too, including sleep apnoea, which starves the brain of oxygen and affects memory.

“People with sleep apnoea have a 26 per cent higher chance of developing a type of dementia. More than half of people have some degree of sleep apnoea when they’re older, even if they don’t know it, and we have effective treatments,” Naismith says.

This new research certainly doesn’t mean that everyone who is sleep-deprived will inevitably develop dementia. Woodward says there are larger known risk factors, the two biggest being age and family history. There are also others more within our control, including physical inactivity, a poor diet, high blood pressure and low mental or social stimulation.

But Woodward warns: “If you’re in one of these higher risk groups, you probably want to be even more attentive about your sleep.”

How to tackle your sleep

Still, getting adequate slumber is important at any age, Naismith says, with sleep deprivation also affecting cognitive ability in younger people, such as alertness, concentration, mood and memory. But it’s from age 40 that dementia pathology is known to build up in the brain.

Woodward says it’s important to start reducing your risk in midlife at the latest: “You must have a good pattern of lifestyle well before you’re getting into 70s and 80s.”

He stresses that cognitive decline is not just normal ageing. “[If] you’re worried about it declining, do something about it, speak to your doctor, don’t just accept it.”

Woodward adds that using sleeping tablets is not the answer as it won’t fix your slumber and it carries an increased risk of cognitive problems.

“People often think they’re getting more sleep than they are,” says Bruck, explaining that a diary can be the impetus to start problem-solving if you aren’t snoozing enough. Common culprits include a bad routine, a sleep disorder, mental illness, stress and substances such as alcohol, caffeine and nicotine.

But remember that it’s normal for our sleep to change when we get older, Bruck says. Our internal body clock naturally shifts and our brain produces less melatonin, the sleep hormone.

“People shouldn’t compare their sleep when they’re older to how they slept when they were 25. Don’t expect perfection,” Bruck says – rather, what’s important is that it leaves you feeling restored.

Get a little more outta life

Start your week with practical tips and expert advice to help you make the most of your personal health, relationships, fitness and nutrition. Sign up to our Live Well newsletter sent every Monday.

Most Viewed in Lifestyle