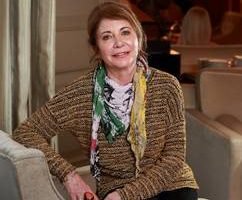 'Seeing your parent drunk is tough, especially when it's your mother'

I knew my mother was drinking from about the age of four. I was born in Shropshire to an English mother and an Irish father, and I remember telling my Irish granny about it.

She said, ‘Oh Sharon, don’t be so silly, your Daddy wouldn’t allow that’. And I said, ‘He doesn’t know. She hides the bottles behind the bed head’.

Of course, in those days, the thought of a woman being an alcoholic really wasn’t about.

Even men being alcoholics was a fairly new thing. I was the only person I knew of whose mother was an alcoholic – and that was kind of a hard stigma.

I always knew when she was drinking. I saw the signs immediately, as did my older brother. One of the really damaging things is seeing your parent drunk – making a complete idiot of themselves and embarrassing you. That’s pretty tough – and particularly tough when it’s your mother.

There were dreadful, dreadful incidents throughout the years and you’re too young to do anything about it. Once you get to teenage years you can do something about it. But from the age of nine to 12 you’re very vulnerable and you have no control over it at all. I don’t think she ever felt any guilt. She never apologised or anything.

Mum was cross-addicted. She was heavily addicted to cigarettes and she died from emphysema. She was into tablets too – she’d kind of take anything. She was sexually abused by her father and she had depression. She was afraid to deal with it because she thought it would open a can of worms. She thought she wouldn’t be able to cope with it.

I think she married my dad to get away from her own father.

She was 10 years younger than him and they were completely ill-suited, to be honest.

Mum was a very shy person – even to the end she always thought the drink made her more interesting. We tried to say, ‘But Mum, you know you don’t need it. You’re nice the way you are. You don’t need the drink!’ But she just never believed you.

We did try to change Mum in a lot of ways but we couldn’t. And that was damaging for all of us. You can’t change somebody, and that’s very wearing. She had to come to the realisation herself that she wanted to give it up, which took a very long time.

My Dad was a GP. He had quite a few patients who had drink problems so he got involved with AA.

He tried to convince her that she had a problem but Mum always thought AA was for drunks – not for the likes of her.

Then she went into St Brendan’s psychiatric hospital where she had ECT (formerly known as electroshock therapy). That was just something they did in those days – but it didn’t work. I think she was in St Brendan’s for about three months. She went in with brown hair and thin and she came out fat with black hair – which is a bit of a shock when you’re eight or nine.

We moved back to Ireland when I was four and my mum got a divorce from dad when I was 11. She moved back to England and I remained with my Dad in Dublin. My brother is seven-and-a-half years older than me so I was brought up almost like an only-child.

It was a lonely existence and a peculiar upbringing. He went away a lot and left me with people I didn’t know. One family bought me a rabbit, I was with them for so long. I now have a phobia about saying goodbye – I get very emotional.

I went to Al-Anon recently and I found it quite moving actually. There were a few men there, but mainly women who were struggling with their husbands.

There is more help out there now. And I think to share your story with other people is incredibly helpful, especially when you’re going through it at the time. I think it would have been helpful for myself and my brother to have gone to Al-Anon when we were younger – to try and not feel ashamed or embarrassed. Holding on to secrets is very damaging, especially for young children.

Mum eventually gave up drink at 60 and then, when she got uptight, she would take a little concoction of tablets instead. Of course, it never leaves you.

We have three children and grandchildren now and even though they are too young to be drinking, these things sometimes hit the next generation and the generation after. So I think you have to be very aware and open with your family by letting them know that it could pop up again, and quite likely.

* In conversation with Katie Byrne