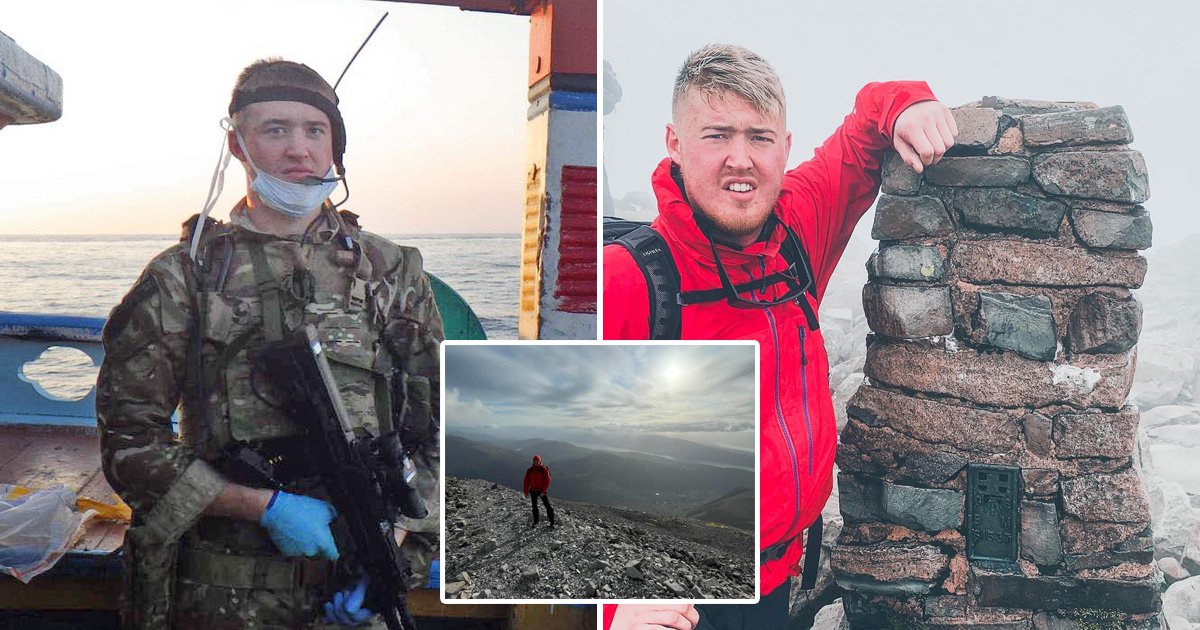 A sailor who was diagnosed with cancer at just 19 years old celebrated getting the all-clear in a glorious way.

Ciaran Daniel, now 23, from Hull, never let cancer get in the way of his love of outdoor activities and adventure.

Daniel was working for the Royal Navy in the Persian Gulf, undertaking anti-piracy and anti-drug operations, when he discovered he had cancer.

Initially, being just a teenager, he had brushed off some of the symptoms.

‘It was a physically demanding job so when I noticed that I was bruising a lot, I just assumed it was due to the nature of my role,’ said Daniel.

‘I was experiencing a lot of tiredness too but that was easily explained by how demanding my job was.’

It wasn’t until Ciaran noticed blood in his urine that he sought medical advice.

‘I was sent to a private hospital in Dubai where they did blood tests,’ he said. ‘When the results came back, they didn’t know how I’d even managed to walk into the building, my blood levels were so low.

‘In hindsight, I think it was the fact that I was very healthy and physically fit that had kept me going.’

Ciaran had a bone marrow biopsy which revealed his devastating diagnosis.

He shared: ‘They broke the news to me on New Year’s Eve 2018, that I had acute lymphoblastic leukaemia.

‘Because of the drugs I had for the biopsy, I was pretty out of it when I rang my family and I told them I had leprosy. My doctor took the phone off me and had to break the news to them.

‘I remember seeing the Burj Khalifa from my hospital room lit up for the New Year and thinking about how it hadn’t turned out to be the day I’d planned.

‘At 19, you think you’re invincible, so to find out I had cancer was completely shocking.’

It was then that he was told he had acute lymphoblastic leukaemia, an aggressive form of cancer that affects white blood cells.

As he was working for the Royal Navy in the Persian Gulf, Ciaran was flown by private jet back to the UK, where he underwent three years of treatment.

But even while Ciaran was having intravenous chemo, he was still out and doing active things.

‘You probably shouldn’t do that on that sort of treatment, but I couldn’t stay still,’ he recalled. ‘I was climbing, kayaking, surfing and hiking. It kept me occupied and upbeat during the tough time.’

Ciaran was able to see his parents daily as they stayed on the hospital grounds’ accomodation.

‘I was having chemo intravenously, through tablets and spinal injections,’ he said. ‘It was intense and, at first, it wiped me out. I just slept constantly.’

After seven weeks, Ciaran moved into the Fisher House accommodation where his parents were staying, visiting the hospital daily for treatment.

‘I stayed there until October 2019, when I was finally able to go back to Hull, returning for monthly appointments while continuing the chemo through tablets at home.’

But Ciaran’s chemotherapy treatment came to an end in May this year, after he got the all-clear from cancer.

And since outdoor activity had given him such an important outlet throughout treatment, it seemed only fitting that he celebrate the news in the outdoors too. So, he climbed Ben Nevis.

‘A friend and I had planned to go to Scotland for the weekend to do some walking,’ he explained. ‘We brought all our hiking gear with us, even though we weren’t planning to do anything strenuous.

‘But we reached the foot of Ben Nevis, looked at each other and said, “why not?”‘

Ciaran and his friend hiked up the 1,345m-high mountain in the Scottish Highlands and, reaching the top, Ciaran heard his phone ping.

‘It was a reminder to take my medication,’ he shared. ‘I had just one chemo tablet left and figured the top of Ben Nevis was the perfect place to end my treatment’

Ciaran’s friend filmed him taking his last tablet, which marked the end of his three-year journey with cancer.

Since then, Ciaran’s scans have come back clear and now he is raising awareness for Teenage Cancer Trust.

‘The Teenage Cancer Trust unit was spot on, and the staff helped save my life,’ Ciaran said. ‘They’ve also been a great support for me, helping me through things that I didn’t want to bother my family with.

‘Teenage Cancer Trust is an amazing charity that has helped me so much, and I want to raise awareness of what they do.’