Toxic air pollution damages the heart rhythm and circulatory systems of millions of people, a damning report has warned.

The Committee on the Medical Effects of Air Pollutants (COMEAP) analysed an array of studies conducted over the past decade.

In the most comprehensive review of the impact of pollution on the heart to date, the body warned breathing in toxic air can: 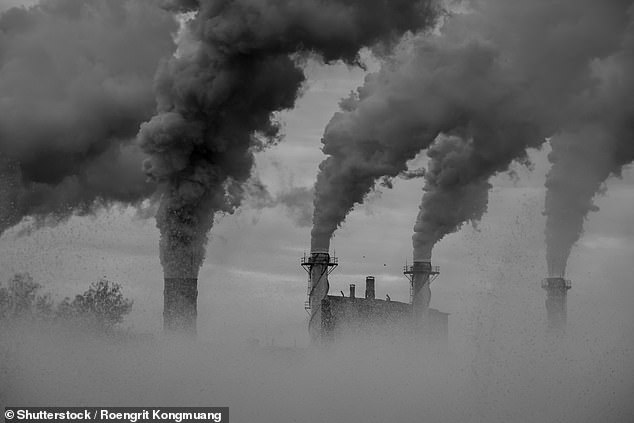 The COMEAP report comes after the World Health Organization (WHO) earlier this week warned air pollution was the ‘new tobacco’.

More than 90 per cent of the world’s population suffers toxic air pollution which is having a drastic effect on the health of people, especially children.

Professor Frank Kelly, chair of the COMEAP, claimed the findings bring into ‘sharp perspective the impact of ambient pollution on public health’.

He added: ‘This review found several possible mechanisms which may explain how particulate air pollution contributes to cardiovascular disease.’

Young children who grow up exposed to air pollution are more likely to develop asthma, research suggested in December 2017.

A mix of dust, sand and non-exhaust tailpipe emissions, known as coarse particulate matter, increases youngsters under 11’s risk of the lung condition by 1.3 per cent, a study by The Johns Hopkins University found.

Air pollution also raises their risk of visiting the emergency room due to their asthma by 3.3 per cent and being hospitalised with the condition by 4.5 per cent, the research adds.

Young children are thought to be more at risk due to them typically spending a lot of time outdoors and being vulnerable to air pollution due to their immature lungs, according to the researchers.

Around 7.1 million children in the US have asthma, making it the most common chronic childhood illness.

Approximately 1.1 million youngsters are affected in the UK.

The researchers analysed the asthma diagnoses and treatment data of 7,810,025 children aged between five and 20 years old living in 34 states between 2009 and 2010.

They estimated levels of coarse particulate matter in each zip code using information from the EPA’s Air Quality System database from 2009 to 2010.

He added: ‘This thorough report gives us a clear view of the damaging impact air pollution has on our heart and circulatory system.

‘While there are steps that people can take to reduce their exposure to air pollution we can’t expect people to move house to avoid air pollution.

‘Government and public bodies must be acting right now to make all areas safe and protect people from these harms.’

The charity believes that adopting more stringent WHO air quality guidelines into UK law is a crucial step in protecting the nation’s heart health.

Long-term exposure to the air pollution mixture in the UK contributes to between 28,000 and 36,000 deaths every year, according to estimates.

The WHO also estimate that almost six in ten deaths related to outdoor air pollution being caused by a heart attack or stroke.

The body claims there are now 300million people living in places where toxic fumes are six times above international guidelines.

As a result, the Government has repeatedly been hauled into court over the last few years.

Diesel cars have been promoted since the 1970s as an environmentally-friendly choice because they emit less carbon dioxide, the greenhouse gas which causes global warming.

The tactic – which aimed to help Britain hit EU carbon emissions targets – contributed to the number of diesel drivers in Britain jumping from around 1.5million a decade ago to about 11million today.

But in recent years scientists have realised that diesel also produces more of the tiny particles and nitrogen oxides that are damaging to human health.

Black carbon is considered the most dangerous component of air pollution, because it penetrates deep into the lungs and into the bloodstream.

DOES EXPOSURE TO AIR POLLUTION DURING PREGNANCY CAUSE BIRTH DEFECTS?

Women exposed to air pollution before getting pregnant are nearly 20 percent more likely to have babies with birth defects, research suggested in January 2018.

Living within 5km of a highly-polluted area one month before conceiving makes women more likely to give birth to babies with defects such as cleft palates or lips, a study by University of Cincinnati found.

For every 0.01mg/m3 increase in fine air particles, birth defects rise by 19 percent, the research adds.

Fine air particles, which weigh less than 0.0025mg, are given out in vehicle exhaust fumes and, when breathed in, become deposited in the lungs where they enter the circulation.

Physicians Committee figures reveal birth defects affect three percent of all babies born in the US.

Around six percent of infants suffer in the UK, according to a report from the British Isles Network of Congenital Anomaly Registers

Monthly fine air particle levels were matched to the home addresses of pregnant women before and after they conceived.