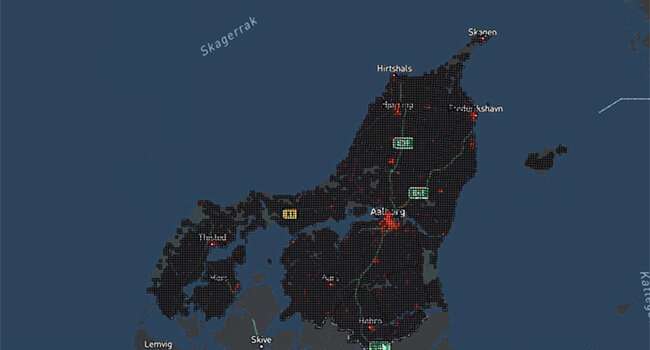 What happens when municipalities in the Copenhagen area experience a COVID-19 flare-up? Would closing the schools have any effect, or would a better choice be directing the parents to work from home? Due to the COVID-19 pandemic, authorities worldwide have several times implemented steps to keep the pandemic in check.

Now, researchers from the Department of Computer Science at Aalborg University have come forward with a new agent-based model that can be used as a tool for making even better, informed choices regarding which restrictions to implement.

The background of using agent-based modeling to analyze, predict and control the rapid spreading of COVID-19 is described in the paper Fluid Model-Checking in UPPAAL for COVID-19 published in the distinguished conference proceedings series Lecture Notes in Computer Science.

In the new model, the researchers simulate interactions between specific agents or in other words, individuals. Based on data from Statistics Denmark, the Danish Building and Housing Register (BBR), the Central Business Register and the State Serum Institute of Denmark, the researchers have used the agent-based technic to construct a model of Northern Jutland, with more than 500,000 individuals.

The region was placed under lockdown in November due to the fear of spreading the cluster-5 variant of the coronavirus, circulating primarily in farmed minks.

In the model, each individual is assigned a state of health, which is combined with general data on addresses, places of employment, family sizes and commuting patterns to calculate realistic simulations of the mobility patterns of all Northern Jutland inhabitants.

Project head, Professor Kim Guldstrand Larsen, explains that the researchers have simulated the case numbers in the region over the course of 100 days based on two different scenarios: One scenario in which no lockdown was implemented, and the actual scenario where schools and municipal boundaries, etc. were closed:

“The model enables us to simulate real chains of infection. In our assessment, over a period of two months the lockdown resulted in around 10,000 fewer cases in Northern Jutland,” says Kim Guldstrand Larsen.

In the context of the model predicting that the region would have experienced around 70,000 cases in that period if no lockdown had been implemented, this equals a percentual reduction of 14 percent in the total number of cases over the period of two months. This equals 167 fewer new cases a day.

“We can draw up accurate scenarios for how the disease will spread under different conditions. If we turn back time a few months, we would also have been able to predict the probability of the cluster-5 variant spreading across the regional boundary,” says Kim Guldstrand Larsen.

The model of Northern Jutland is based on open data—in other words, the researchers have no access to sensitive personal data. If they had precise data on, for instance, where people live and where they work, they would be able to predict very accurately whether each person would be infected in the near future.

“The authorities have access to the actual numbers and will be able to use the model for making very accurate simulations of the real-world situation. With the current data, the model should be seen as a tool for a more nuanced predictive contagion tracing—a kind of weather forecast for the spread of COVID-19. We have used Northern Jutland as our point of departure, but the model can be used anywhere with a certain amount of data,” says Kim Guldstrand Larsen.

To develop the model, the researchers have used the software tool UPPAAL, which they themselves have developed over the last 20 years. The tool has been used to analyze several real-world complex systems, including heating and traffic control systems, where the behavior of the overall system is given by the complex interaction of its components. In the new setting, the components of the model are people interacting through contagion.

“Prior to this, we have worked with systems of 2,000 components, so of course, it was quite a leap to the 500,000 components we are working with now. This requires a whole lot of computing power, and as far as I know, we are part of a limited group of researchers currently capable of making this kind of simulation,” says Kim Guldstrand Larsen, pointing to the work of American colleagues who have recently published an equivalent study in Nature.

The Danish authorities have shown great interest in the Danish researchers’ work, and Kim Guldstrand Larsen has high expectations of the model being used by the State Serum Institute of Denmark.