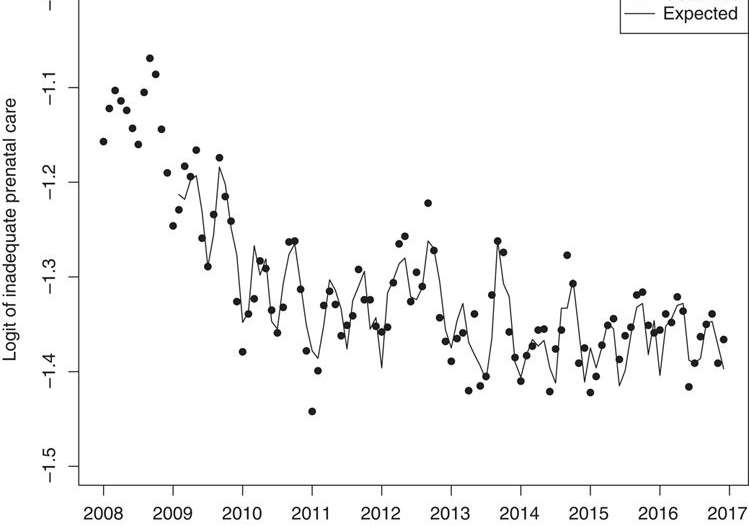 Rates of prenatal care among foreign-born Latinx pregnant people decreased below expected levels during the 2016 presidential campaign—likely reflecting the effects of harmful anti-immigrant rhetoric, reports a study in the November issue of Medical Care.

“The worsening shifts in prenatal care utilization we observe may serve as a bellwether for worsening outcomes among immigrant women and their families,” according to the new research by Alison Gemmill, Ph.D., MPH, of Johns Hopkins Bloomberg School of Public Health, Baltimore, and colleagues.

Previous studies have found increased rates of preterm births among Latinx people following the 2016 presidential election—”perhaps the most explicit anti-immigration campaign in modern history,” according to Dr. Gemmill and colleagues. They write, “Candidate Trump labeled immigrants as threats to public safety and economic stability and pledged to expand and enforce numerous anti-immigration policies, including forced deportation of undocumented individuals.”

Such racialized and anti-immigrant political discourse “may have unique deleterious effects on the health and well-being of pregnant people from targeted populations,” the researchers add. One potential explanation is a “chilling effect” of anti-immigrant rhetoric, leading to underuse of timely and adequate prenatal care—particularly among pregnant people who fear deportation of themselves or their family members.

Analysis of trends before and after the 2016 presidential campaign

To assess trends in prenatal care before and during the 2016 presidential campaign, the researchers analyzed national data on prenatal care use and birth certificate data from 2008 to 2017. Rates of adequate prenatal care in “monthly conception cohorts” were compared for Latinx foreign-born pregnant people and a control group of native-born, non-Latinx White pregnant people. The analysis included nearly 12.4 million deliveries in 23 states.

The odds of both inadequate and late/no prenatal care increased by nearly 5%. The upward shifts persisted through the remainder of the study period, which ended with pregnancies conceived around December 2016. Inadequate prenatal care did not appear to explain the previously reported increase in preterm births among Latinx people associated with the 2016 election, the researchers note.