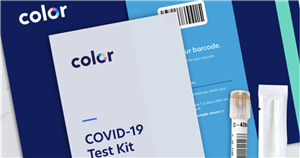 The company now boasts of $278 million in financing with a valuation of $1.5 million.

Its clients can access a custom-built software that was designed to integrate with laboratory results and is HIPAA compliant. As part of its services the startup is able to provide genetic testing results for genes associated with an increased risk of common hereditary cancers and high cholesterol.

According to the company, the service is able to integrate into physician ordering, and users can get genetic counseling after being tested.

More recently, the company has worked with COVID-19 testing efforts. The company offers not just testing, but also surveillance for population health. It has teamed up with PerkinElmer and the State of California to work on these testing efforts.

Color previously made headlines when it teamed up with the National Institutes of Health for its All of Us program – a national research project dedicated to collecting data from a diverse population for prevention and treatment of diseases.

Public health initiatives that combine genomics are becoming increasingly popular. In Finland, the FinnGen Project, a public-private research partnership, aims to bring 500,000 genomic samples (covering roughly 10% of the Finnish population) together with health records in order to help understand the origins of disease, prioritize drug treatments and come up with new therapies.